A Hong Kong actress who sparked an internet sensation recently with her youthful appearance has revealed her age for the first time.

Carman Lee Yeuk-tung has barely aged since she posed for a set of cassette adverts around 1990.

After keeping her age a secret for nearly three decades, the Cantonese star has announced that she is 54 years old. 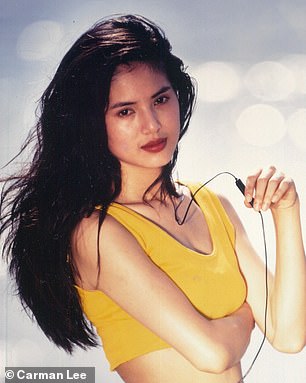 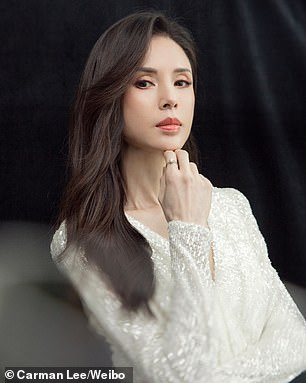 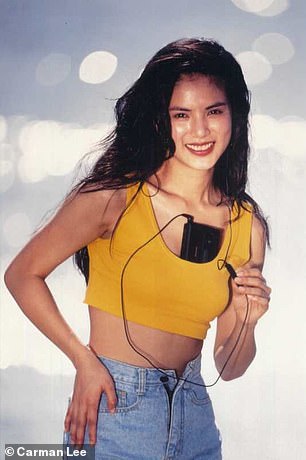 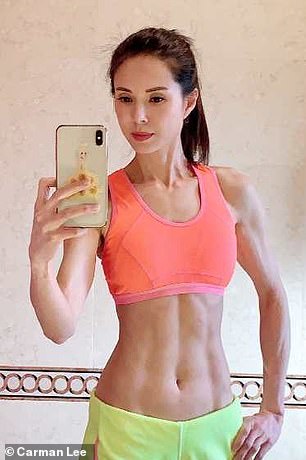 Then and now: The celebrity has caused an internet sensation on Chinese social media outlets with her ageless looks (left, pictured around 1990) and six-pack abs (right, pictured in May) 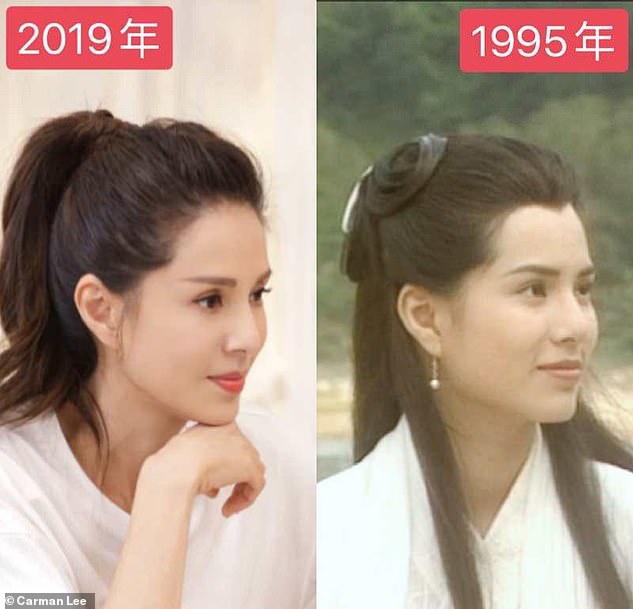 Ms Lee surged to super-stardom in the mid-1990s – after a stint as a flight attendant – for her role as a female martial arts master (right) in a classic fantasy TV series. The star (left, seen in 2019) has been billed as the ‘Fairy Sister’ after the character that thrust her into the limelight

Ms Lee’s flawless skin, ageless looks and incredibly toned physique make it hard for anyone to believe that she is in her mid-50s.

‘I have spent most of my life and welcomed my 54th birthday,’ she wrote on Weibo, the Chinese equivalent to Twitter, on August 16.

‘People may think that a woman would no longer be in the peak of her life once she passes 30. In fact, no matter when and at what age, [a woman] shall not stop advancing,’ the star encouraged her nearly 5.3million followers.

Ms Lee thanked her family, especially her mother, for bringing her up and her colleagues for helping her build a successful career.

‘I would like to thank myself too. Right now, I am calmer and more determined than before. I wish that I would be able to keep this calm mentality and healthy body consistently for life.’

The celebrity concluded: ‘One’s life should never be defined by others, we should all live well.’ 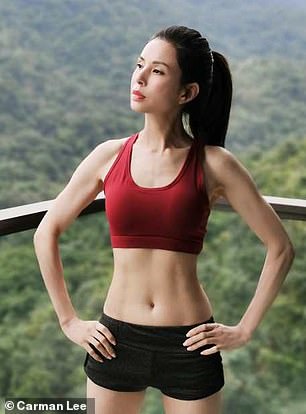 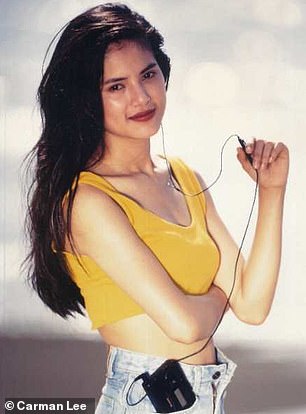 2019 vs 1990: Ms Lee’s followers have praised the actress for ‘becoming younger and younger’ after pictures of her from last year (left) and 30 years ago (right) went viral on social media 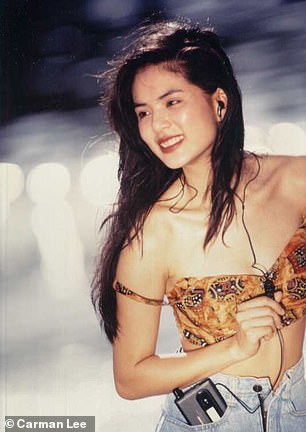 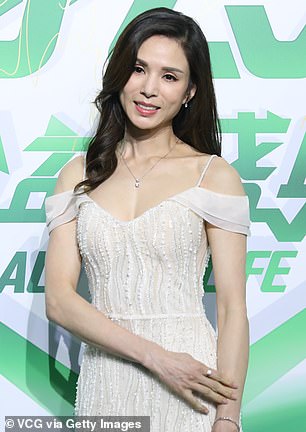 Despite ruling the screen for decades, the star had never revealed her real age until August 16. She is seen at charity activity in December last year (right) and in an advert around 1990 (left) 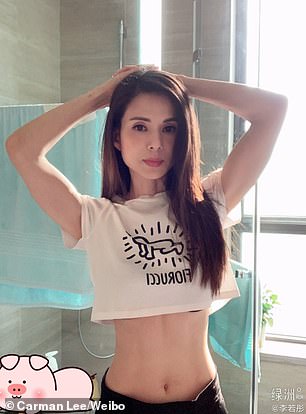 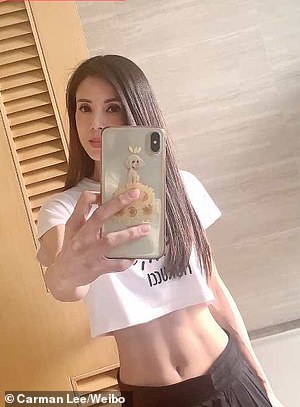 The 5ft5in Cantonese beauty confesses that she is a fitness fanatic. She reveals that she has stuck to a regular workout routine for decades and uses nine exercises to get a firm abdomen

Ms Lee surged to super-stardom in the mid-1990s – after a stint as a flight attendant – for her role as a female martial arts master in a classic fantasy TV series.

She has since been billed as the ‘Fairy Sister’ after the character that thrust her into the limelight.

In May, she became a trending topic on China’s Twitter-like Weibo after sharing a photo of her ripped body following a period of intense training.

‘After 10 days of constant mobility training, it is surprising to see the appearance of my six-pack abs,’ the star wrote alongside the picture.

‘No matter how old you are or I am, as long as we try, there is nothing we can’t achieve,’ she encouraged her fans.

Her supporters flocked to express their amazement of Ms Lee’s muscular build in the viral image.

Another said: ‘Why hasn’t she aged?’

A third commenter gushed: ‘She is becoming younger and younger.’ 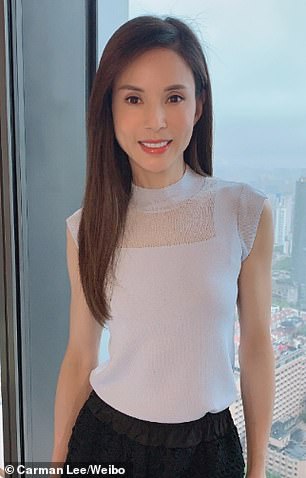 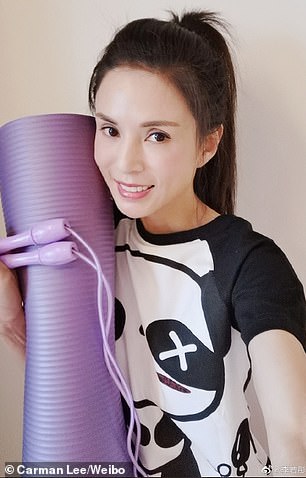 Speaking of her secrets to staying youthful, Ms Lee says it is vital for women to keep their skin moisturised and avoid getting tanned. She is pictured in June (left) and April (right) this year 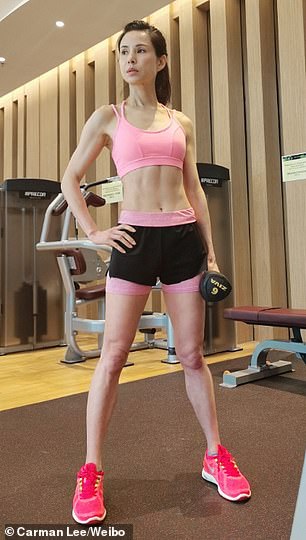 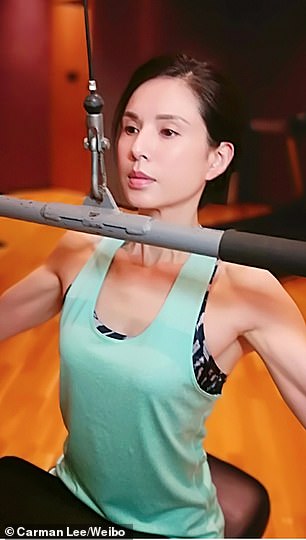 The star has begun to teach her followers how to achieve six-pack abs through a series of clips on her accounts on Chinese social media platforms, including Weibo, Douyin and Xiaohongshu

On July 16, the star uploaded a set of pictures of her from around 1990, attracting even more attention on social media.

Sporting a yellow crop top and a pair of denim shorts, a younger Ms Lee was modelling for a cassette brand in the promotional snaps.

The actress said she had recently found these old photos while looking for materials for her new book.

‘Although 30 years have passed, I can still remember the day of the shooting clearly. I was working part-time to pose for cassettes. Many people might not even have used them,’ she said on Weibo.

Speaking of her secrets to staying youthful, Ms Lee says it is vital for women to keep their skin moisturised, especially the skin on their hands and neck.

She also stresses the importance of avoiding getting tanned in summer.

Renowned for her thick hair, the idol claims that her iconic locks are the result of her love for black sesame, whether it’s fried or ground.

She confesses that she combs her hair every night before going to bed to keep it smooth and straight, as well as help her sleep better. 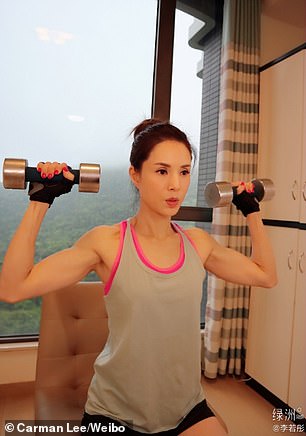 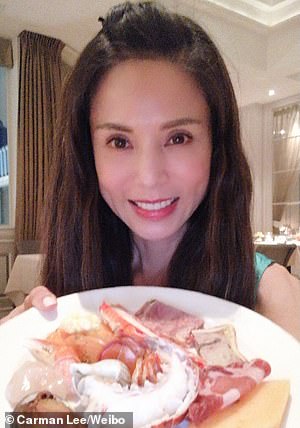 The celebrity says she rarely consumes snacks and never drinks coffee or tea. The pictures show her working out (left) in April and celebrating her birthday (right) in August last year 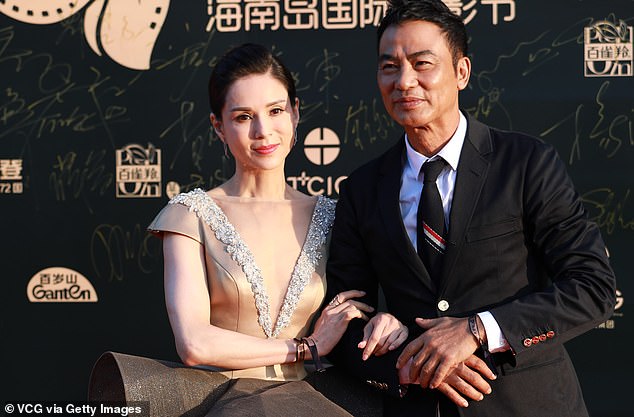 Carman Lee poses for a photo with Hong Kong actor Simon Yam on the red carpet of the second Hainan Island International Film Festival at Haitang Square on December 1, 2019

The celebrity says she rarely consumes snacks and would only eat nuts – such as walnuts and hazelnuts – if she feels hungry at work.

She adds she ensures that she drinks a lot of water every day – but she never touches coffee or tea.

In terms of her enviable physique, Ms Lee admits she is a fitness fanatic.

She reveals that she has stuck to a regular workout routine for decades and uses nine different exercises for a firm abdomen, including sit-ups and crunches.

The star has begun to teach her followers how to achieve six-pack abs through a series of clips on her accounts on Chinese social media platforms, including Weibo, Douyin and Xiaohongshu.