Anna Thwaites was a toddler during Australia's last recession. This time, she's 32 and facing an uncertain future with limited job prospects.

Ms Thwaites was made redundant from her full-time job as an editor at publishing company Scribe in April. She is yet to find another job — although she hasn't been looking just yet. 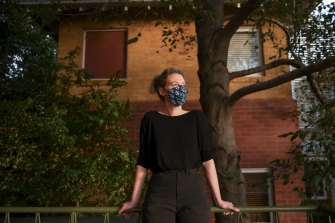 Anna Thwaites will lose her support from JobKeeper.Credit:Penny Stephens

After negotiating her way onto JobKeeper, she has managed to stay on top of the bills during the COVID-19 lockdown.

"I've been granted this absolute fluke, in capitalism and life, to be paid enough money to cover rent and food and not have to work," she said.

But with the wage subsidy payments set to begin reducing from the end of this month, Ms Thwaites is preparing for the difficult task of finding work in the middle of a severe economic downturn.

"I'm about to get thrown into the cold, I've kept my eye on what's in my field," she said, as she considers the prospect of finding something to replace the role she held for five-and-a-half years.

"From what I see of the job listings it is basically nothing, I expect that will get worse."

On Wednesday, the Australian Bureau of Statistics confirmed the nation had entered its first recession since 1990-1991.

The economy shrunk by 6.3 per cent over the past 12 months, the most severe contraction since the Great Depression almost 100 years ago.

Before losing her job, Ms Thwaites said she was in the fortunate position of holding a permanent role in the publishing industry.

Now, she is anticipating a career path involving a mix of freelance and part-time roles.

She doesn't mind the idea of flexible work in theory, although she concedes it may prove to be more difficult than she thinks.

"I might be about to realise what that is like," she said. "I was living in a bubble."

With households tightening their belts, Ms Thwaites is already thinking about reducing her spending by giving up a one-bedroom flat in Elwood for a share house. She acknowledges her position is easier than others, with no children or mortgage to worry about.

"I've always worked in low-paid jobs, I don't mind living on a shoestring," she said.

"I guess I'm kind of curious to find out what it's like to struggle."

While Australia has enjoyed decades of economic growth, Ms Thwaites said those benefits had not been shared equally due to the erosion of workers rights.

She said her parents hadn't spoke about the recession of the early 1990s and that she wasn't too concerned about what life holds in the future.

"I am kind of surprised by how much people are horrified by the prospect of a recession, because it seems to me historically there have always been ups and downs," she said.

"We've had a lot more ups than downs. Poverty is hard but it is not the defining factor, maybe it's a really naive thing to say."