Wrexham: King Charles has toured the grounds of the lowly Welsh soccer club Wrexham owned by Ryan Reynolds and Rob McElhenney, talking to the Hollywood actors about their dream of steering the team to sporting glory.

In cold, brilliant sunshine, Charles joked with the co-owners on the pitch of a club that sits within the National League, four rungs below the Premier League that is home to the likes of Manchester United, Chelsea and Liverpool. 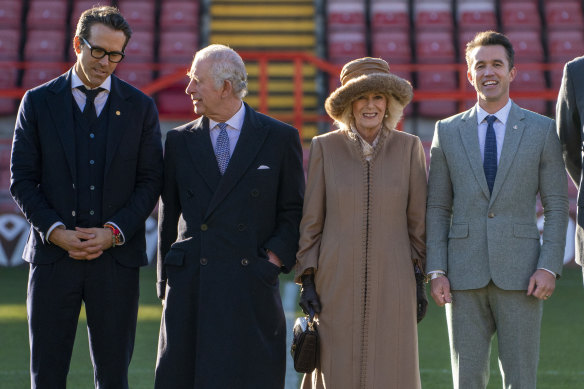 Reynolds, of Deadpool fame, and McElhenney, the creator and star of sitcom It’s Always Sunny in Philadelphia, bought the club in 2021, saying they had a Cinderella-like dream to steer the non-league club into England’s top flight.

Reynolds told reporters the duo had pledged to try and elevate the club and the community.

“Having the king pay a visit is certainly one way to do it, that’s for sure,” he said.

Wrexham is second in the league and fighting for promotion. 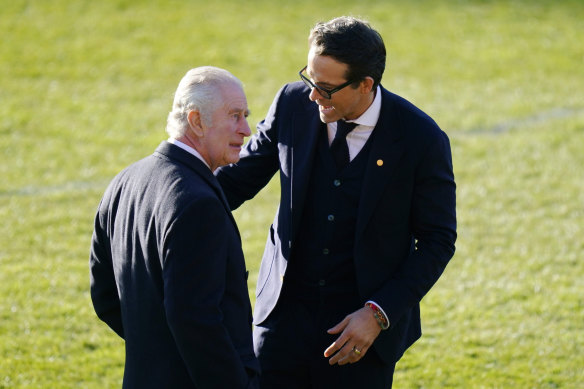 Charles and his wife Camilla were in Wrexham to celebrate its new status as a city and to hear about the redevelopment of the club.

“A little earlier today, I had the opportunity to see one of the other wonders of Wrexham, namely the football club, which is busy putting Wrexham on the map as never before,” Charles told dignitaries later in the day.

Reynolds and McElhenney have been seen supporting the team from the stands – a very different experience from those enjoyed by the billionaire owners who sometimes fly into the likes of Manchester City and Newcastle to enjoy high-end hospitality, and watch a bit of football.

The team’s fortunes, and the efforts of its owners, are being tracked by a documentary series available in Britain on the Disney streaming platform, called Welcome to Wrexham.

The royal visit comes a day after the king’s younger son, Prince Harry and his wife Meghan, used another streaming site, Netflix, to talk about the problems they faced in the royal family.