‘Go back to Africa!’: Shocking moment racist woman hurls a tirade of vile abuse at students on a Dublin bus and reduces them to tears

A group of students were reduced to tears when a woman started hurling vile racist abuse at them as they travelled on a Dublin bus.

The woman was caught on camera telling black passengers to ‘walk back to Africa’ and repeatedly used a pejorative racial slur against the group who were returning from a birthday outing.

The incident took place on the number 44 Dublin bus on Sunday evening. A woman, pictured, was filmed racially abusing passengers on a Dublin Bus on the south side of the city on September 13. The woman also verbally abuses the person videoing the incident 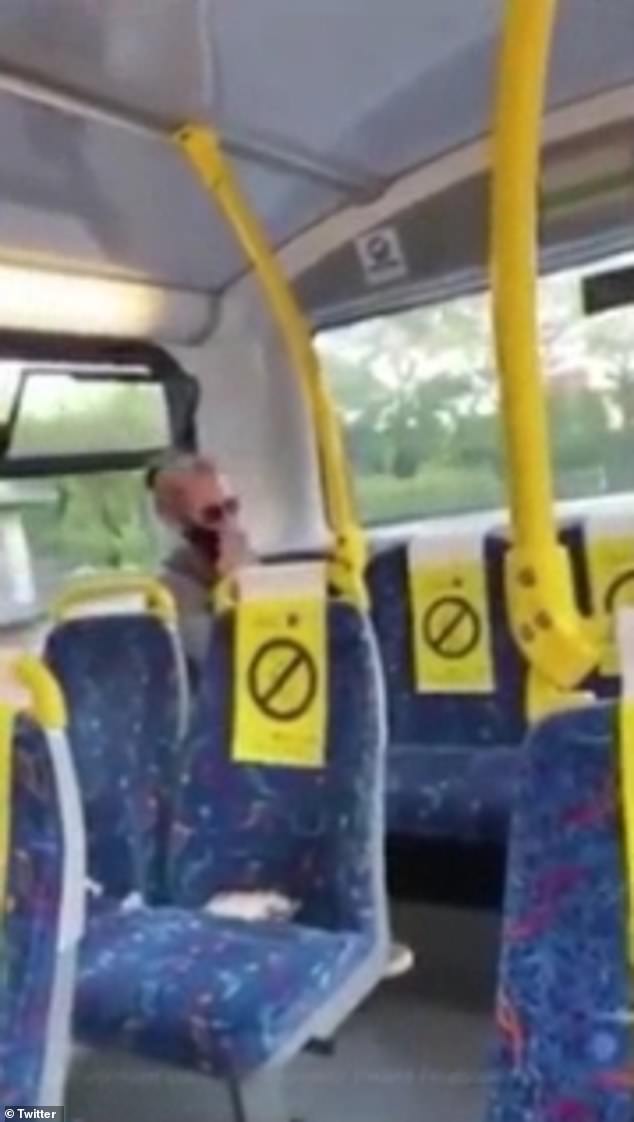 Several passengers remonstrated with the woman over her unacceptable behaviour

According to one of the victim’s friends told Dublin Live: ‘ My friends and I were out in Dundrum at the mini-golf for one of my friend’s birthdays. We were getting the bus back when this lady started being racist towards us on the top deck of the bus.

‘Firstly she said she “didn’t want any virus” off some of my friends and was screaming and getting really abusive.

“She wouldn’t get off and was getting more and more abusive, everyone on the bus was in disbelief, the driver stopped the bus and told her she would have to get off. I was in disbelief too, this is the first time something like this has ever happened to me, my friend’s birthday was ruined, she was crying.’

The shocking footage, which took place around 7pm in the Dundrum area of Dublin was shared widely online.

During the footage, the woman can be heard shout: ‘I have a health issue I don’t want coronavirus.’

The man, believed to be the driver, warned the woman that she cannot racially abuse  fellow passengers.

He said: ‘If you say that again I’m going to get you off the bus.’

The racist responds: ‘Go ahead, I’ll walk home, I will walk home. You can’t walk home to Africa.’

The woman continues her racist tirade and when she notices that she is being filmed, she shouts: ”F*** you and your camera, I’ll shove that up your hole.’

The woman then jumps to her feet and runs towards a passenger and says ‘Get away from me’ after a passenger says she has ‘corona.’

As the abuse continues, the woman claims: ‘I am a racist because I am with a race, white supremacy.’

A fellow passenger berates the racist branding her as ‘disgusting’ and a ‘disgrace to the country’.

Eventually, the racist agrees to leave the bus which service Dublin City University on the city’s northside and Enniskerry, Co Wicklow to the south.

An Garda Siochana said they are aware of the video and are investigating it.

A spokeswoman said: ‘An Garda Síochána takes hate crime seriously, and each and every hate crime reported to us is professionally investigated and victims supported during the criminal justice process.’

Dublin Bus told MailOnline that they are aware of the incident which happened around 7pm on Sunday.

It said each bus in its fleet is equipped with CCTV cameras and drivers receive instruction to report such incidents immediately.