A car has smashed into a north-eastern suburbs cafe, hitting a pedestrian and her dogs and destroying the shopfront.

Ambulance paramedics were called to Were Street in Montmorency at 7am on Friday, after a black sedan drove onto the footpath and ploughed into the front of the Espresso 3094 cafe. 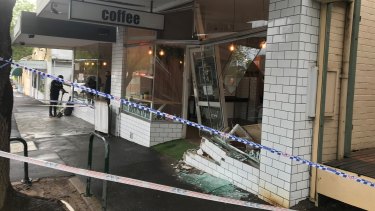 Damage outside the Montmorency cafe on Friday. Credit:Nine News

A woman in her 30s who was hit by the car was taken to the Austin Hospital, where she remains in a stable condition. The driver of the car was not injured, and no one in the cafe was harmed.

The cafe's front window was smashed and the door knocked from its hinges.

A spokeswoman for the State Emergency Service said an exclusion zone was set up around the front of the cafe to "make sure the area was safe".

The building remains structurally safe, but SES crew members from Nillumbik stayed at the scene for nearly two hours, due to the significant damage to the shopfront.

"We attended to assist with a car-versus-building," she said. "No occupants of the shop were injured, a council building surveyor will attend today." 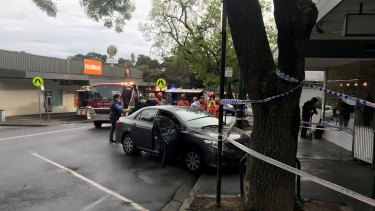 The damage out the front of Espresso 3094 in Montmorency on Friday morning. Credit:Nine News

Vision from the scene showed a number of police officers surveying the damage and interviewing witnesses.

WorkSafe is expected to attend the scene. The cafe has now reopened.