A woman has had her breasts removed after a cheap boob job using petroleum jelly and performed by a friend of a friend left her deformed, infected and in agony.

The shocking case has been highlighted by a Russian campaigner against cosmetic surgery abuses, Alana Mamaeva, 32, amid an alarming rise in such horrors.

The patient, 48, told how she wanted to enlarge her ‘small’ breasts but after she had a baby and suffered from mastitis they became misshapen with a ‘huge boil’.

An unqualified ‘surgeon’ showed the victim her own ‘very beautiful breasts’ and said she could do the same for her with injections of jelly, for £5. 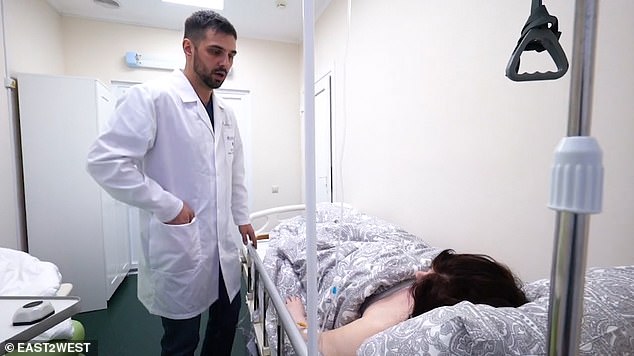 A woman from Russia was left deformed and in agony after she had a botched boob job where six jars of petroleum jelly were injected into her chest. She is pictured recovering with Dr Oleg Vedrov after the jelly was removed

In order to have the botched procedure the woman agreed to pay for the cost of the materials, totaling around £4.70, with the friend using her as a ‘guinea pig’.

The woman, from the Caucasus region of Russia, said: ‘I agreed the procedure with my husband.’

She then underwent the back street boob job without anaesthetic in her own home, having six jars of jelly injected into her body.

Pictures show the appalling consequences of the botched procedure, which has left the woman needed to have her breasts reconstructed by a cosmetic surgeon. 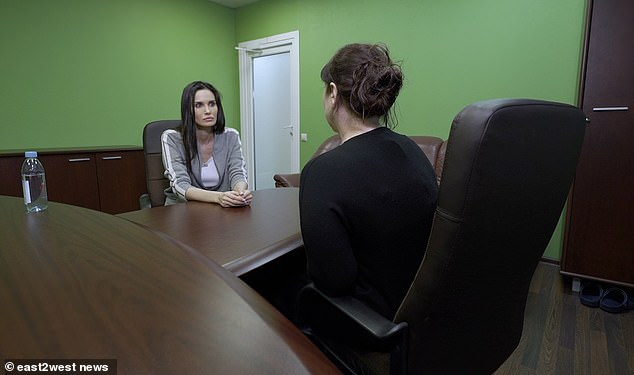 The woman, who has not been named, said a friend of a friend used her as a ‘guinea pig’ for the procedure and she covered the costs of the materials, which cost around £5. She is pictured, right, with campaigner Alana Mamaeva, left

Discussing the boob job, the woman said: ‘It was such a pain, a hellish pain, but I wanted this beauty.’

Soon she had a ‘terrible fever’ and was ‘scared, regretting what I did’ but after two days the pain subsided and the woman said her ‘breasts were a wonderful shape, so beautiful…my husband was pleased’.

Yet the catastrophic consequences became clear after she gave birth. The woman suffered from mastitis, which is an inflammation usually associated with breast-feeding, and her boobs became misshapen with a ‘huge boil’ .

She said: ‘The appearance was terrible – the pains were unbearable. There were ugly open wounds.’ 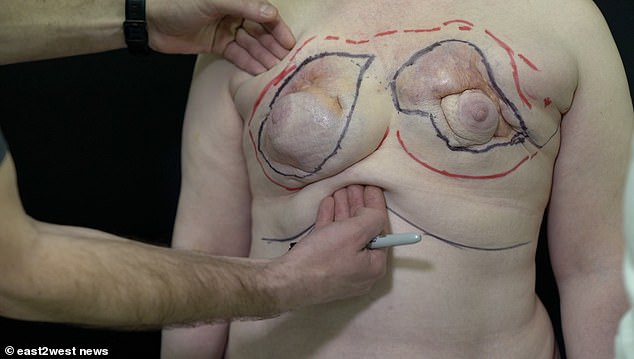 Immediately after the botched boob job the woman said she was in ‘hellish pain’ but ‘wanted this beauty’. Her mangled chest is pictured after her breasts were removed

After pus poured out of her swollen breasts the woman was forced to seek medical assistance.

‘I felt this liquid coming out of me,’ she said. ‘Of course, I regretted of what I did. I beg other women never to take such steps. You will regret it, not in the first year, but later it will be terrible for you.’

The woman has now had surgery to remove the hardened petroleum jelly but this left her chest ‘looking life a war wound’.

Campaigner Mamaeva said: ‘You are destroying your own body with your own hands, demolishing your life.

‘Such cases are shocking, horrifying. But they need to be shown and told to increase women’s awareness, literacy and security – because knowledge is power.

‘This woman – and dozens like her – do not need to be criticised by society or condemned. They have already punished themselves.

‘Society should be kinder and more understanding. They need help and its what the good surgeons are trying to provide.’

After the damage they suffered there was no other way, he said, adding that in six months he will try to rebuild them by removing skin from the abdomen. 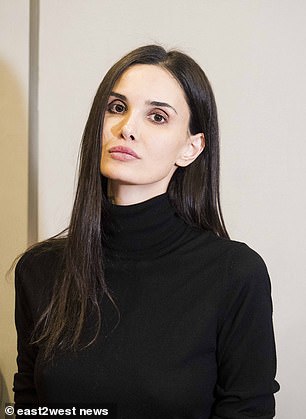 Asked by Mamaeva if he could save the patient’s nipples, he said: ‘I hope so, but cannot guarantee it. In this situation the main task is to fight not only for the nipples.’

Dr Vedrov warned that such carnage caused by use of Vaseline-type products are far from rare.

‘(The breasts) become inflamed, pus forms…. and deformity. It impregnates all the tissue and lies like a stone. It has to be removed completely. The tissue itself is removed.’

He had received injections to give himself a superman body shape.

But Tereshin warned that he could face amputations or death unless he got rid of his fake biceps and triceps.

Dmitry Melnikov, the surgeon who operated on Tereshin, is seen in a picture holding lump of petroleum jelly and ‘dead muscle’ weighing more than 3lbs removed from the bodybuilder’s triceps.

The medic said women were also at risk from such injections.

‘In the whole our country women are often injected with petroleum jelly and so get disfigured,’ he said.

‘Instead of expensive plastic surgery, they agree to petroleum jelly injections and later come to us to remove it.

‘We have seen petroleum jelly injected into breasts, buttocks, and other parts of the female body. We are warning that it is extremely dangerous.

‘It is traumatic for the body, leading to huge scars and without medical treatment it ends even with death.’