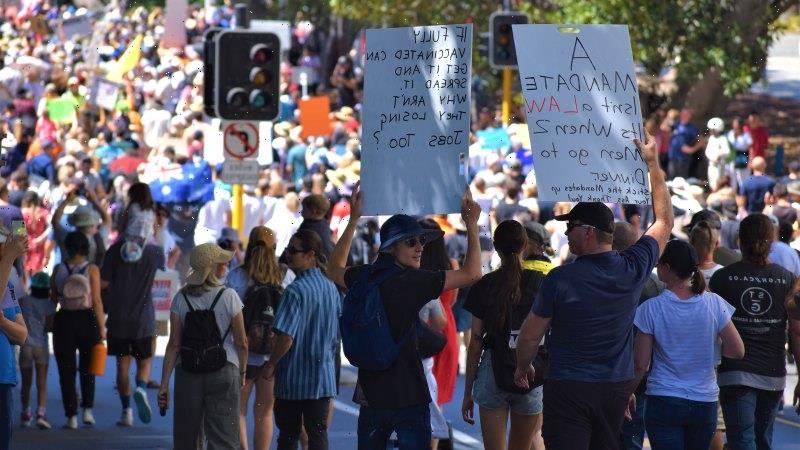 Australia is on the cusp of a remarkable public health achievement, yet the national mood has turned sour.

It is a paradox as we prepare to reconnect with each other and the world, emerging from a once-unthinkable period of national isolation with the twin distinction of very low rates of illness and death from the novel coronavirus, and globally high rates of uptake of vaccines that were no guarantee to be produced at all, and were only approved for use nine short months ago. 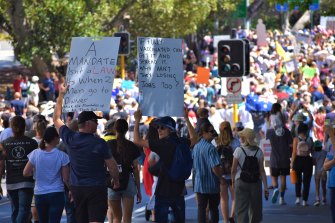 People march through Perth’s CBD holding signs and calling out the word “freedom” in protest of vaccine mandates and strict borders. Credit:Holly Thompson

To that, you can add an economy that has avoided the worst of recession or depression seen elsewhere, and which in many parts of the country is ahead of where it was pre-pandemic, albeit with extraordinary public debt to buttress its foundations.

So why is Australia so angry?

In Victoria, protesters marched gallows to the front of Parliament House and a protester vowed Premier Daniel Andrews should dangle from a rope.

In Western Australia, two men are charged over alleged phone threats to behead Mark McGowan and his children and his electorate office was forced to close indefinitely because of vulgar intimidation of his staff.

The WA Premier said the alleged conduct was “the sort of stuff that Islamic fundamentalists do, it’s Syria, it’s not the Australian way”.

A Prime Minister trailing in the polls is accused of dog-whistling to “anti-vaxxers”.

He now contends with a backbench revolt as senators and MPs demand he overturn the decisions of states who have regularly ignored him throughout the course of the pandemic.

There is accumulated and uneven fatigue that reflects the reality that restrictions on activity and movement have impacted families and businesses unequally.

But the hot-button issue is mandates which, in typical fashion, have been applied differently from state to state.

When it comes to livelihoods, NSW mandates apply only to health and aged care workers and those in education, whereas in WA, McGowan has imposed them on 75 per cent of the workforce.

When it comes to lifestyle, several states banned the unvaccinated from the pub, the café, the hairdressers or the footy – at least while they were trying to get jab rates up to targeted thresholds – whereas WA has avoided that approach.

Meanwhile, hundreds of corporations are quietly making their own decisions, either setting deadlines for their employees to get jabs, or limiting access to workplaces for the unvaccinated.

Basic Maslow would seem to tell us that threats to livelihoods will provoke a stronger reaction than threats to lifestyle.

Morrison says the federal policy has never been for mandates outside aged care and healthcare settings, yet Victoria reserves the right to introduce them for five to 11-year-old children.

In NSW and in Victoria, where COVID outbreaks have gripped Australia’s largest two cities in the second half of the year, the protective effects of vaccines are spelled out in the data of lived experience.

As restrictions loosened in NSW hospitalisations have continued to fall, as they are beginning to in Victoria as well, which is about four to six weeks behind NSW’s case curve.

An analysis of the peak fortnight of the NSW outbreak between August 25 and September 7 found the COVID-19 case rate was 50 per 100,000 in two-dose vaccinated people versus 561 per 100,000 in the unvaccinated – a ten-fold difference.

When it comes to side effects, ATAGI says it is carefully monitoring reports of myocarditis – inflammation of the heart – which usually resolves itself for most people in a few days but can be fatal for about 0.4 in 100,000 people.

About one in every 100,000 people who receive the Pfizer or Moderna mRNA vaccines developed the myocarditis, rising to 4-9 in 100,000 for young men and teenaged boys who received a second Pfizer dose.

Nationwide, tens of thousands have marched in the streets for their right to shun safe and effective medical treatments.

Threats against elected people are abhorrent and intolerable and, as bitter experience in the United States and United Kingdom have shown, can lead us to dark places.

The Prime Minister says he understands Australians’ frustration and says it’s time for governments to step back and out of people’s lives.

It’s hard to overstate the extent to which society’s information ecosystem has been upended by the internet and social media’s obliteration (and monetisation) of gatekeepers.

Not all these effects are negative, but it is not clear in 2021 that accurate, fact-based information cuts the mustard anymore.

Some portion of the objectors will never be reached by this effort; they are too enmeshed in alternate realities. They reject even estimates of the size of protest crowds as a mainstream media attempt to undermine their cause.

That shouldn’t stop authorities from trying, and that includes being honest about vaccines’ limitations.

As the evidence comes in from overseas, it is clear vaccines are not a miracle, not a guarantee, not a silver bullet, but an extremely helpful protective tool more like a flu shot than a polio eradicator.

Not for the first time I will note in this space that after age, the biggest risk factor for COVID-19 mortality is obesity.

We will keep waiting for Public Health’s 21st century version of Norm and Life. Be In It. as a COVID-mitigation public health campaign.

At an individual level, vaccines massively reduce your risk of getting seriously ill or dying, and reduce – but do not prevent – the risk of catching or transmitting the virus.

At a system/societal level, with sufficient uptake, they mean healthcare resources are not overwhelmed but available to treat the dozens and dozens of other health threats, many of which are far more serious to most people than COVID.

Labelling all those uncomfortable with mandates as “anti-vaxxers”, as NT Chief Minister Michael Gunner did on Monday, would tend to back some of the persuadable into a corner.

But do governments reach a point where they conclude that they cannot help those who refuse to help themselves?