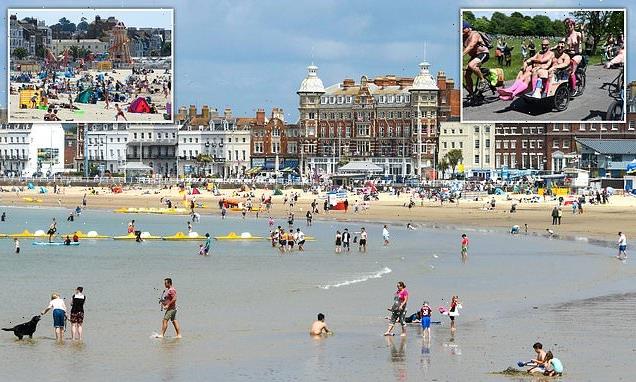 Will it be the hottest June ever? Temperatures are set to continuing climbing from today and rise above 30C by the end of the week in mini-heatwave that could break 35.6C record for the month

London and the south-east of England could reach balmy highs of 22C as temperatures are set to reach heights of 29C in a mini-heatwave.

The Met Office has said South East England may experience temperatures of 32C (89.6F) on Friday and may reach the mid-30s.

This could mean it smashing the previous June record of 35.6C, last recorded in 1976. The highest recorded temperature for the UK this year so far was 27.5C at Heathrow in Hillingdon, west London, on May 17.

The Spanish plume of warm air known as Ola de Calor will push temperatures in Europe as high as 40C (104F) before it makes landfall here in the UK.

The warm weather today of 22C were great for sunbathers enjoying Britain’s beaches and the hundreds of cyclists in Brighton who were doing a naked bike ride. 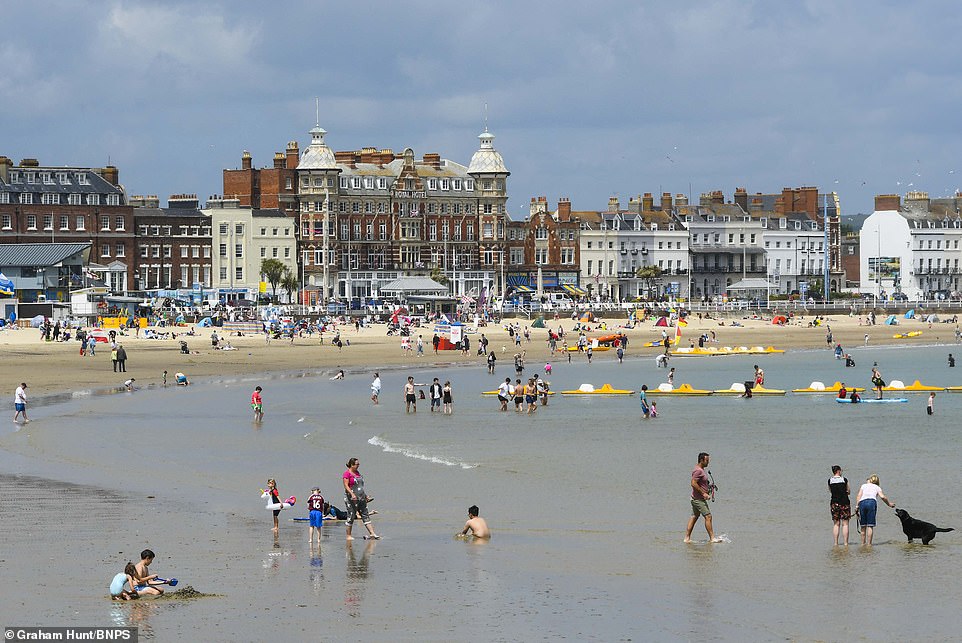 London and the south-east of England could reach balmy highs of 22C as temperatures are set to reach heights of 29C in a mini-heatwave. Picture: Families and sunbathers on the beach enjoying the scorching hot afternoon sunshine at the seaside resort of Weymouth in Dorset 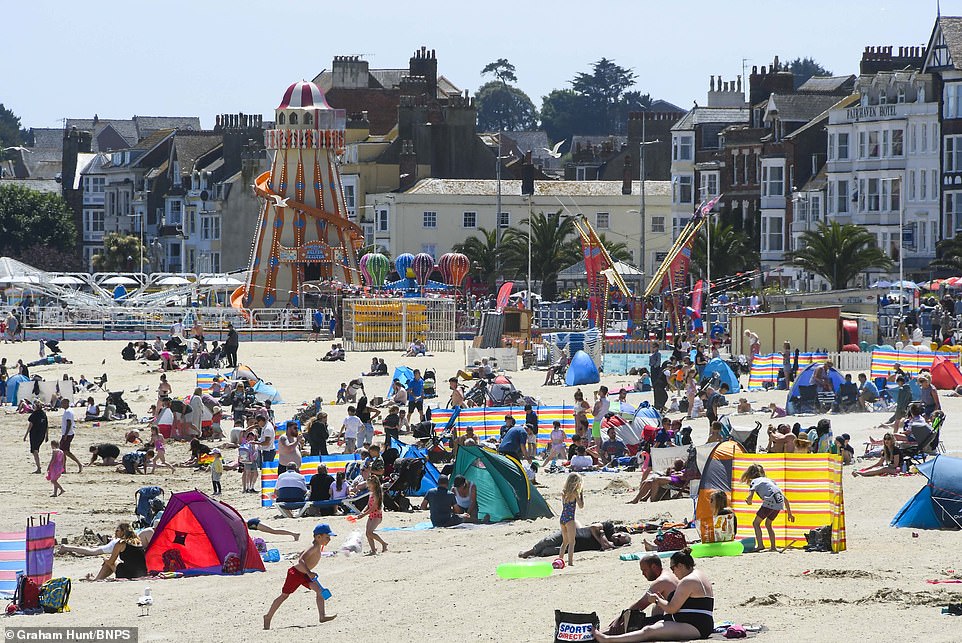 This week is tipped to have the hottest temperatures of the year in the UK so far when the mercury reaches the ‘low 30s’ and could reach further heights this June. People pictured loving the funfair as the skies clear after a cloudy morning to reach highs of 22C 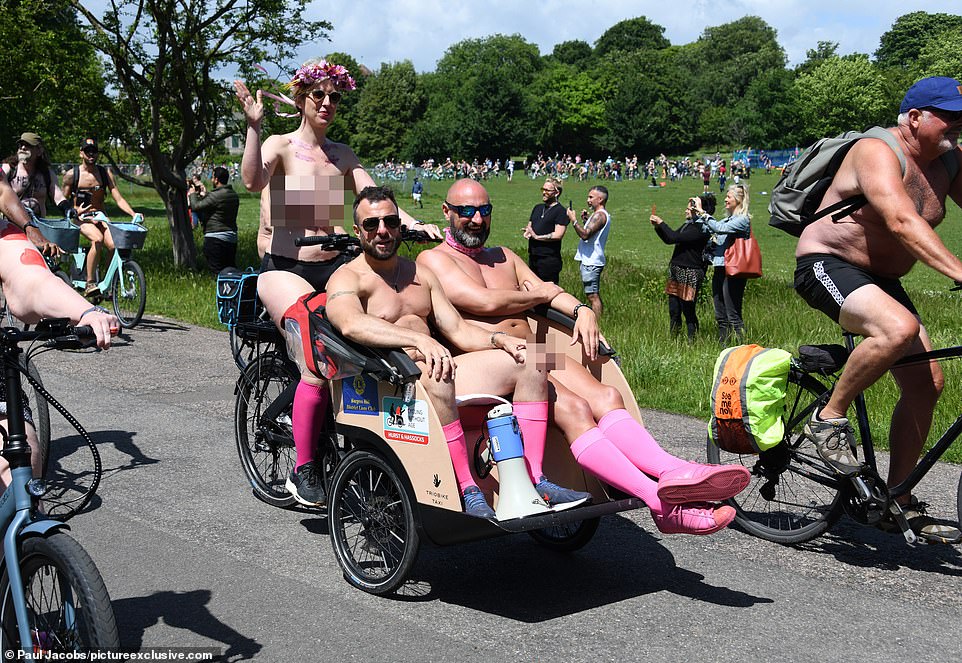 Pictured: Riders celebrate cycling in the nude, with a seven-mile ride around Brighton 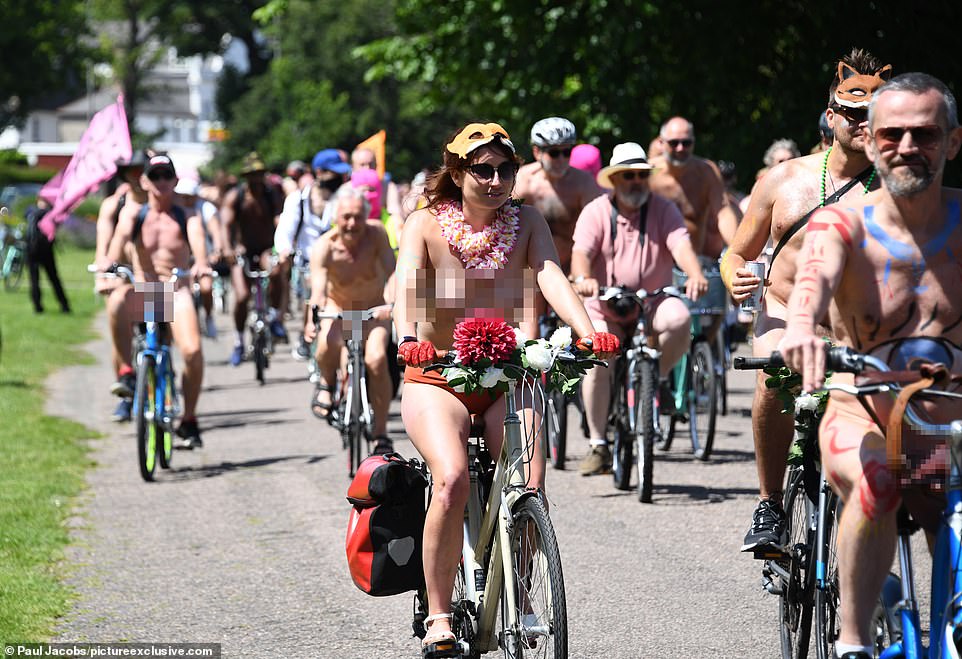 What is the definition for a UK heatwave?

A UK heatwave threshold is met when a location records a period of at least three consecutive days with daily maximum temperatures meeting or exceeding the heatwave temperature threshold. The threshold varies by UK county.

– North. west and Northern Ireland has to be more than 25C 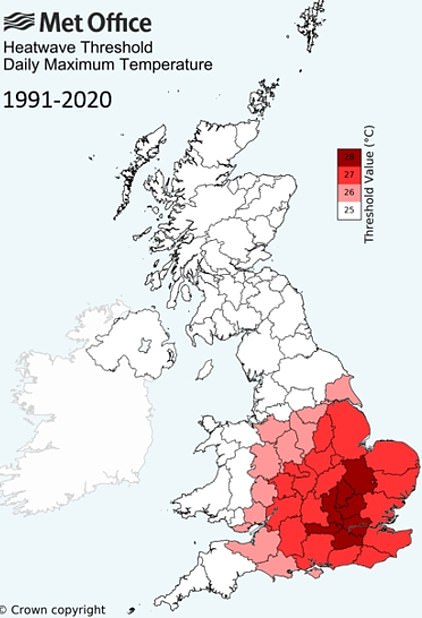 The map was recently updated to change the heatwave threshold for Surrey, Berkshire, Buckinghamshire, Bedfordshire, Hertfordshire, Cambridgeshire to 27C

Since June 2006 the ride which organisers say is a ‘mix of fearless frivolity, freedom of expression and eco-politics’ has been brought to the streets of Brighton.

The event says: ‘The ride aims to empower participants in a fun, celebration of bikes and body-power, while drawing attention to the environmental, health and safety problems associated with car and oil dependency and demanding more space for cycling as a form of low-impact transport.’

The much-needed warmer days will begin on Wednesday, and could last until next Saturday, June 18 – so Brits are advised to get their warm weather clothes and sun cream out of the closet.

Heatwaves are also likely over the coming months, with one meteorologist hailing a turning point after a disappointing start to the year.

‘There’s not been much in the way of exceptionally warm days or hot days yet this year, but that is set to change,’ the Met Office’s Steven Keates said.

‘We’re set to see probably a brief spell of hot weather at the end of this coming week.’

Mr Keates added: ‘It could possibly be a little hotter than [32C and] mid-thirties are possible.’

If the prediction is accurate, Britain will be hotter than Portugal, Jamaica, Costa Rica, the Canary Islands and Cyprus.

Mr Keates thinks Britain will beat its hottest day of the year ‘comfortably on Friday and potentially exceed it, or get very close to it, on Wednesday and Thursday as well’.

The meteorologist added that heatwaves – three consecutive days of high temperatures – were possible between June and mid-September.

‘We think at the moment it will be warmer than average with an increasing likelihood of heatwaves,’ he said.

‘There have been no heatwaves so far this year… the greater likelihood is that it’s going to be the further south, south east, you are.’

The Met Office is predicting highs of 25C for the southeast of England on Wednesday and Thursday, before temperatures climb even higher towards the end of the week.

London will see a maximum of 28C on Friday and Saturday – but with mid-high humidity it will feel more like 31C.

Met Office meteorologist Jonathan Vautrey said yesterday there is a ‘lot of sunshine around to help to keep things feeling pretty warm’ in the south of England, as temperatures reached about 22C in the Greater London area today.

He added: ‘If we take a look further north-west though it is quite a different story, so western areas of Scotland and Northern Ireland are much cloudier today and we are actually seeing some very unseasonably strong winds, so we have seen gales across north-west Scotland, the Highlands and the Outer Hebrides and places like that with rain coming through as well, so temperatures here are struggling a bit more.

‘It is the eastern side of Scotland that has sort of been pushing towards the high teens mark in terms of their temperature, just seeing a few more drier and and brighter spells.’ 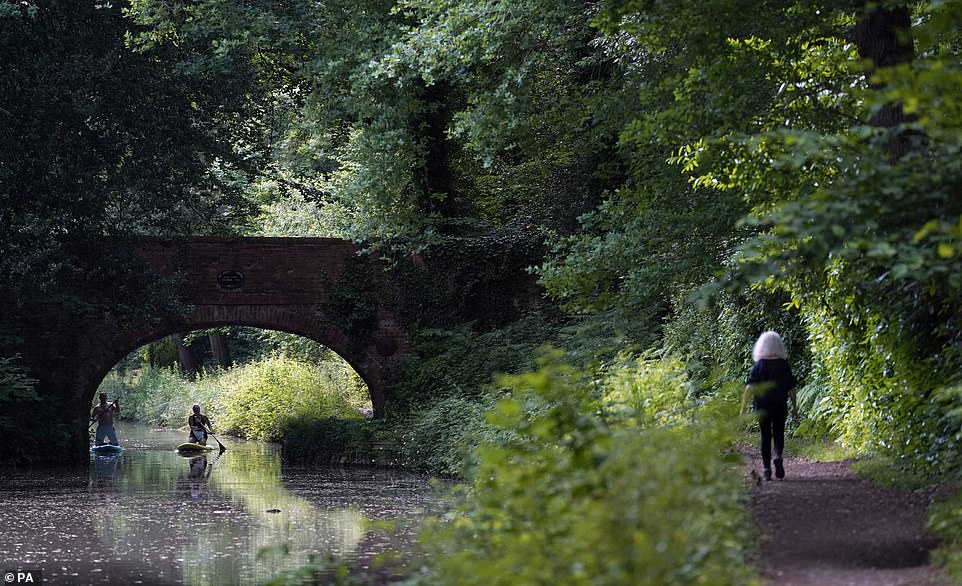 Met Office meteorologist Jonathan Vautrey said there is a ‘lot of sunshine around to help to keep things feeling pretty warm’ in the south of England, as temperatures reached about 22C in the Greater London area today. Pictured: Two paddle boarders pass under a bridge on the Basingstoke Canal near to Dogmersfield in Hampshire 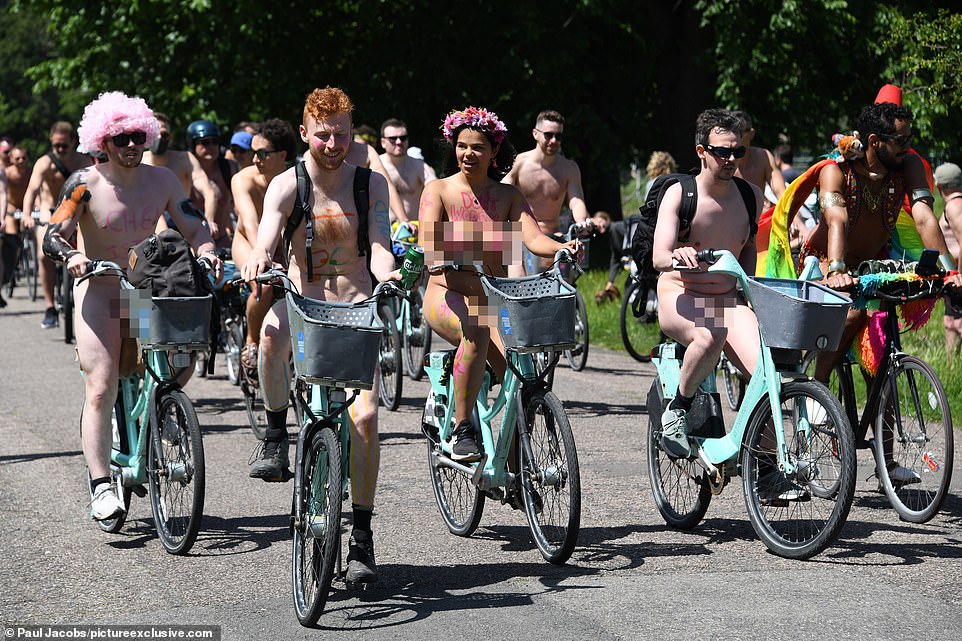 The ride in Brighton today was to highlight bikes, bodies and low-impact living and to protest against fossil-fuelled climate change and the vulnerability of cyclist

Mr Vautrey added: ‘We will sort of continue slightly with this north/west south/east split into next week as well, so we have high pressure building into the south which will allow things to stay relatively settled.

‘At the moment, (it) doesn’t properly extend its influence across the entirety of the UK and that’s allowing low pressure and frontal systems to just fringe into north-west Scotland and Northern Ireland as well into the start of next week, so they can expect some spells of rain and showers at times.

‘As we move into the end of the week, that’s when we are starting to pick up the signal for the potential for some significant heat to come up from the south.’

He said this was ‘still a fair way off at the moment’, so there is is still some uncertainty.

But Mr Vautrey added ‘there is a signal in that the heat we have currently got over Spain – I believe they are experiencing rather high temperatures at the moment – could edge its way northwards to south-eastern areas of the UK, at least for the end of the week.

‘So at the moment, the model wants to take us up to mid-20s by the middle of the week and then potentially into low 30s for Friday, which would be the warmest conditions we have seen over the course of this year so far.’

While British bet makers are going even higher, according to the Mirror.

Coral’s John Hill said: ‘As temperatures continue to sizzle in the UK, our odds are melting fast on this month ending as a record hot June.

‘We make it odds-on for temperatures to climb into the early 30s next week, in what should be a scorching week.’

England and the South East is set to enjoy the ‘hottest of the weather’ because the high-pressure is not extending across the whole of the country, which will keep thing ‘cooler in northern areas’, but they ‘will probably still see a gradual increase in temperatures’, Mr Vautrey said. 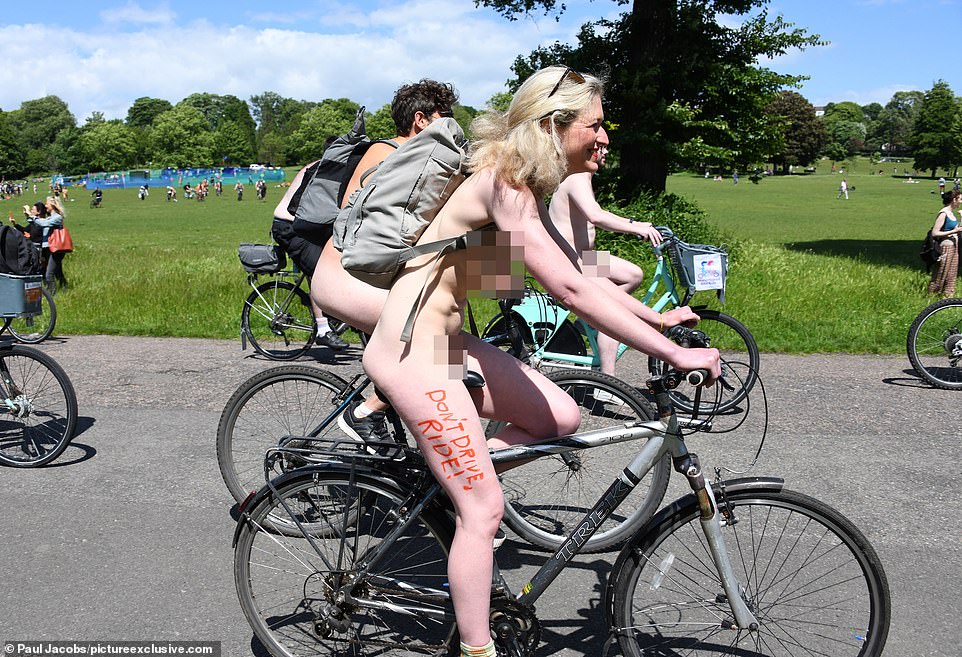 The ride today went through Brighton town centre, then along the seafront to Hove and finishing at Brighton naturist beach 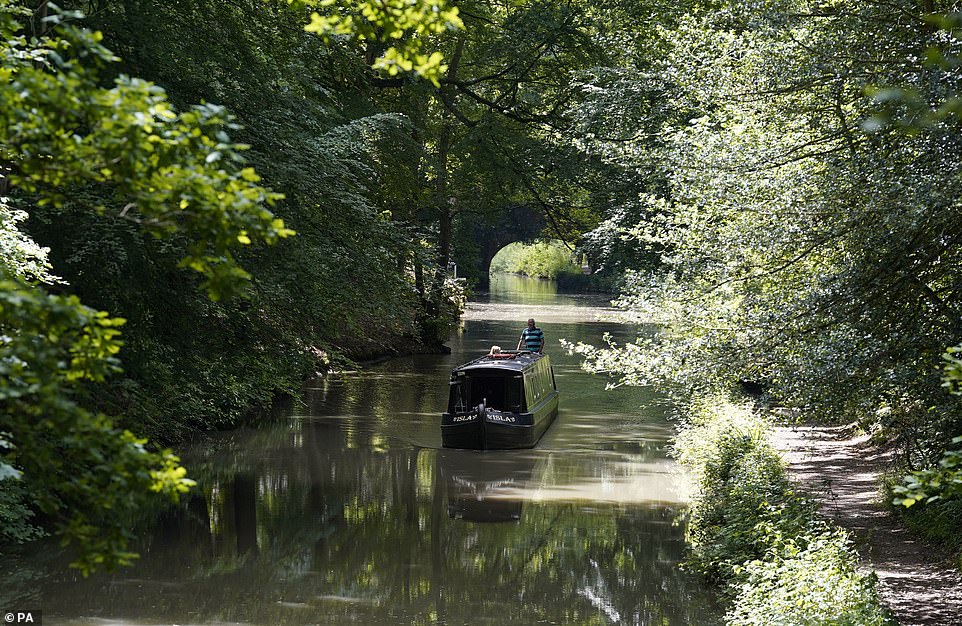 Highest recorded temperature for the UK this year so far was 27.5C at Heathrow in Hillingdon, west London, on May 17. Pictured: A canal boat is driven along the Basingstoke Canal near to Dogmersfield in Hampshire 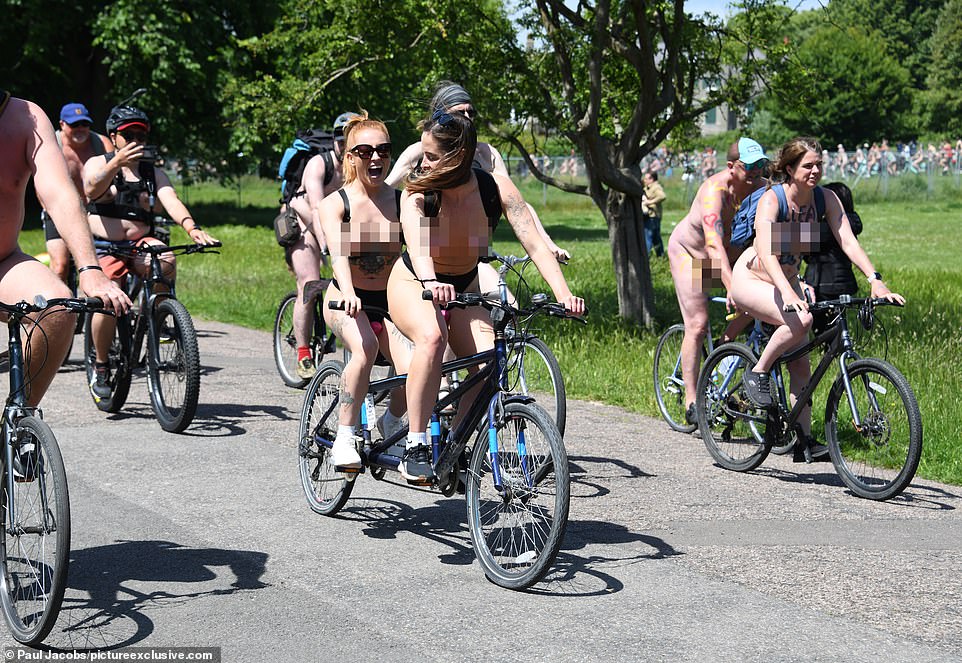 A spokesman for the event told the Brighton Argus: ‘The ride aims to be celebratory, life-affirming and inclusive’

Met Office meteorologist Aidan McGivern said: ‘Heat is building across Spain and that heat pushes into France and the northern edge of that starts to influence the next of next week.

‘As well as that there is some instability on the northern edge of that week so there is the potential for some thunderstorms to move up from the Continent.’

Despite the risk of storms, there are no weather warnings in place for the next week, so revelers can enjoy the sun largely in peace.

The Met Office said in a tweet today: ‘Warm sunny spells in the southeast this afternoon. Rather cloudy further north with some scattered heavy showers, but less windy than yesterday.’

Meanwhile much of the UK is enjoying warm weather this weekend, as thousands head out to local parks and beaches to soak up the rays.

In the summer of 2019,  the 2003 maximum temperature record was broken at Cambridge University Botanic Garden on 25 July, with 38.7C.

High temperatures also bring health risks and people are advised by the NHS to drinking enough water, stay cool indoors, and avoid exercising in the hottest parts of the day.

At yesterday’s Billie Eilish concert in London at the O2 Arena, several fans passed out in sweltering heat and had to be carried out by security.

The American pop star then stopped her performance for three minutes to ask gig goers to move back from the stage during her Happier Than Ever World Tour and then began singing again. 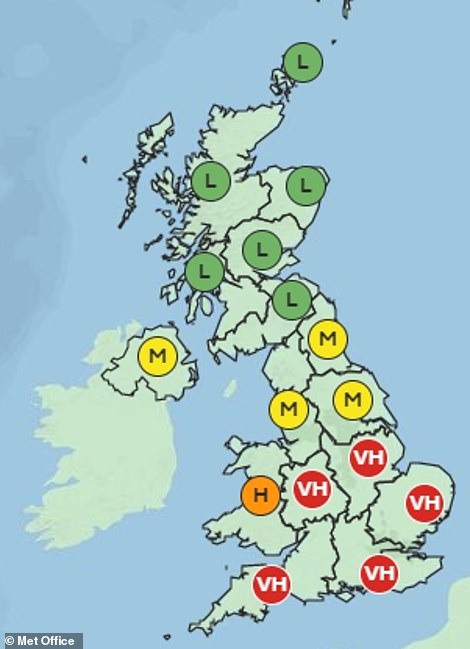 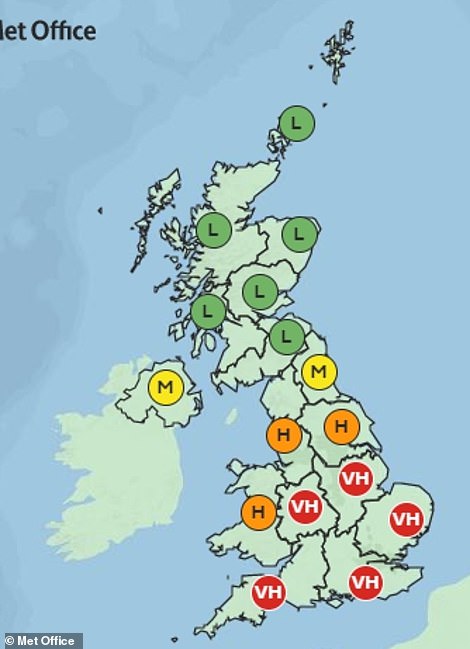 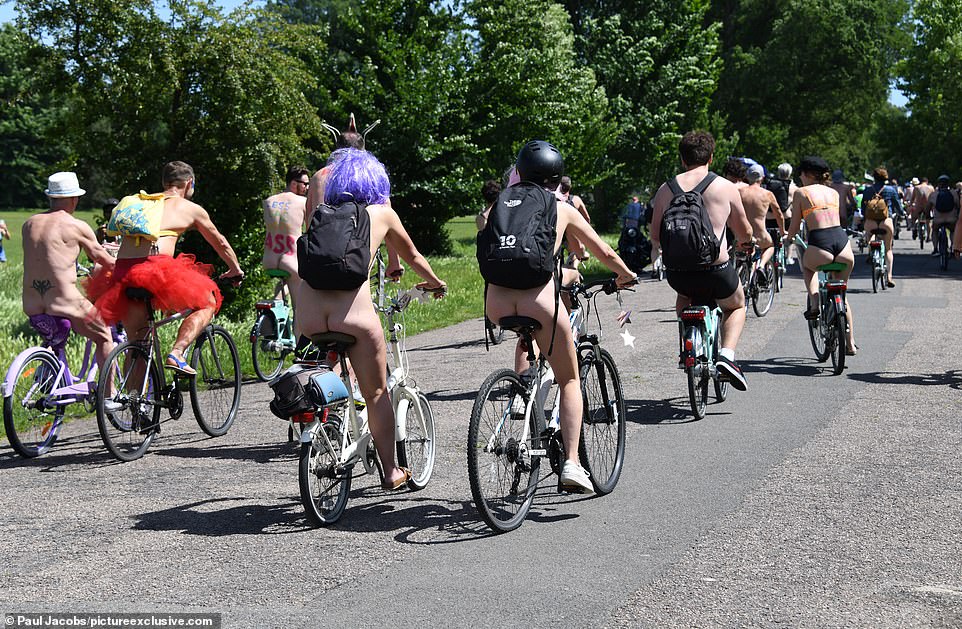 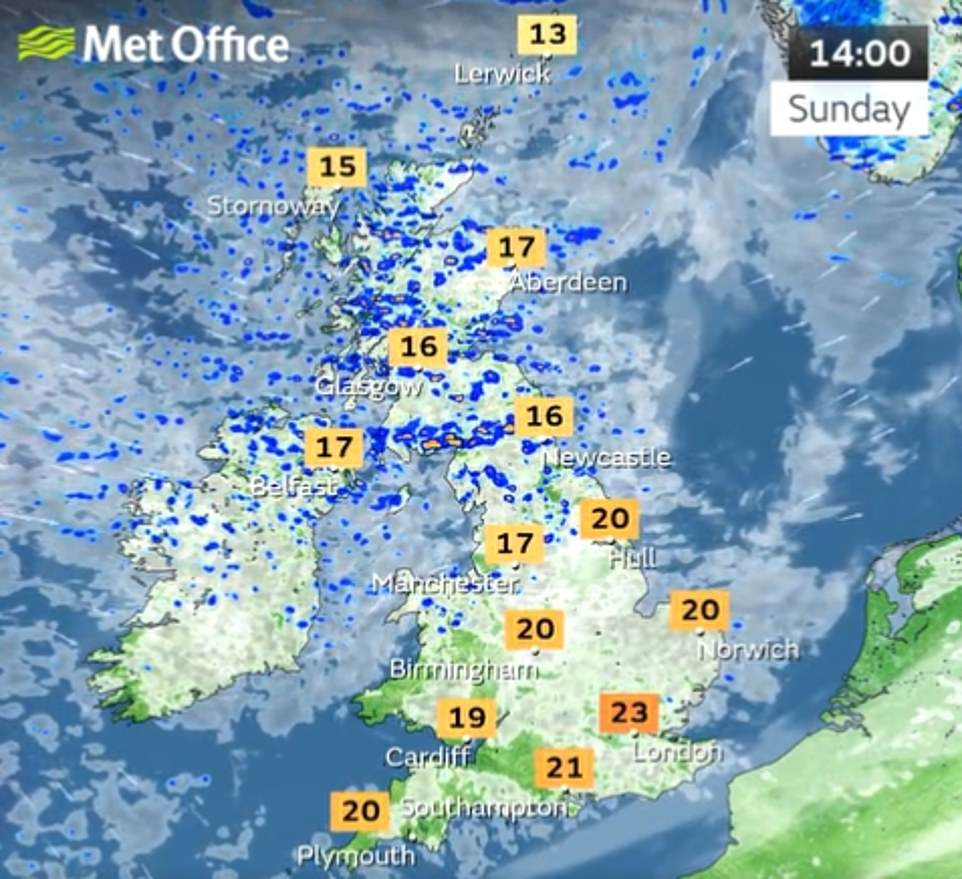 The Met Office said: ‘Warm sunny spells in the southeast this afternoon.  Rather cloudy further north with some scattered heavy showers, but less windy than yesterday’ 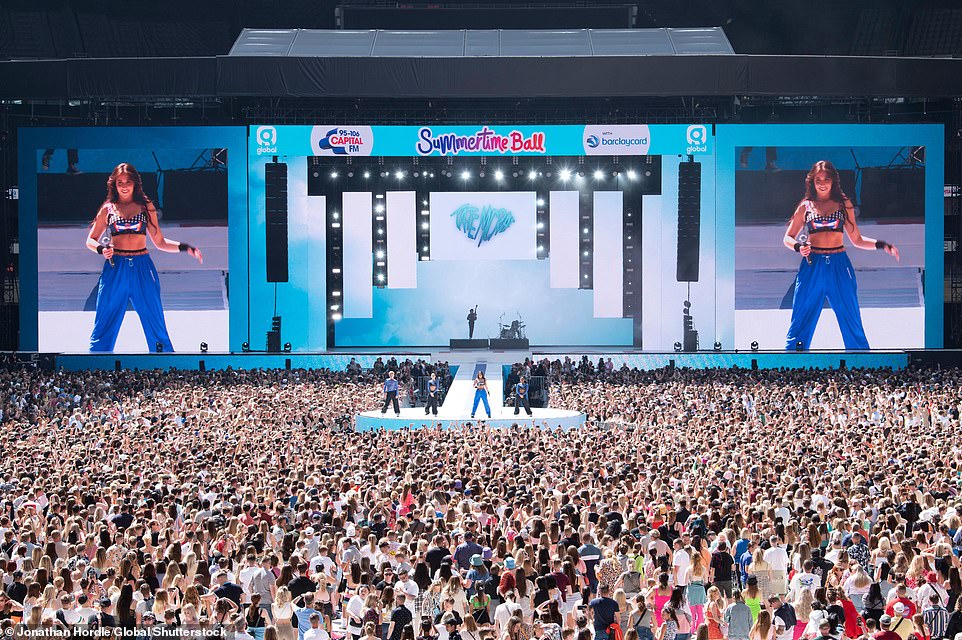 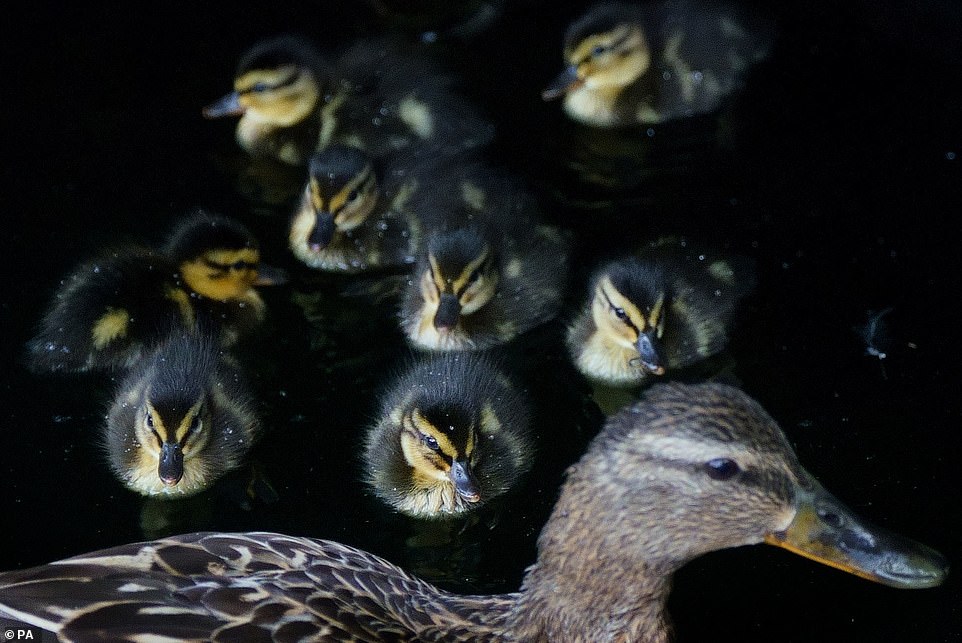 The Spanish plume of warm air known as Ola de Calor will push temperatures in Europe as high as 40C (104F) before it makes landfall here in the UK where it could reach higher than the previous June record of 35.6C, recorded in 1976. Pictured: A young family of mallard ducklings swim in the London Docklands in east London

Pollen levels are also expected to be high or very high in the south of the UK through this weekend, according to the Met Office.

This week, millions of hayfever sufferers in Britain were warned that a high pollen count and thunderstorms will trigger a weather phenomenon known as ‘thunder fever’ as the remnants of a tropical storm lash the country.

Airbourne allergens expert Max Wiseberg, creator of the HayMax allergen barrier balm, said earlier this week: ‘With this fine weather thunderstorms are also predicted, and they can bring problems for hayfever sufferers.

‘Very high pollen counts are predicted across many parts of England from Thursday onwards causing havoc for the millions of hay-fever sufferers in the UK. Predicted thunderstorms won’t give respite, as instead they can cause a phenomenon known as ‘thunder fever’.’

He cited a report in The European Respiratory review which found humidity breaks pollen grains into smaller allergenic particles, which turn into what has been dubbed a ‘super pollen’.