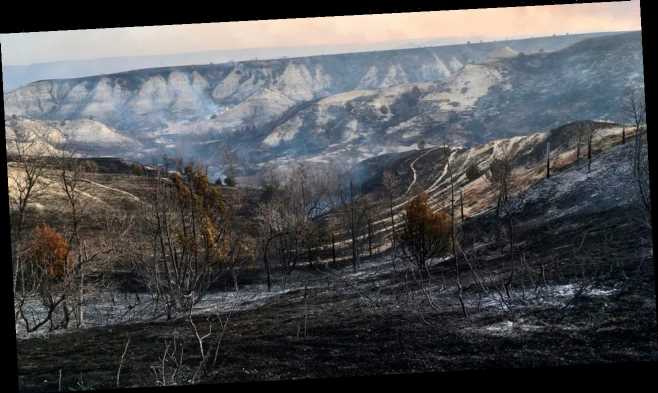 Firefighters worked Monday to further contain a wildfire in Theodore Roosevelt National Park that tripled in size on Easter, according to the North Dakota Forest Service.

Crews worked through the night in the park’s North Unit, where the fire threatens some park staff housing, maintenance buildings and the CCC Campground, according to the Forest Service’s acting outreach and education manager, Beth Hill.

“This fire is particularly difficult because of the rough, inaccessible terrain,” Hill said.

Two air tankers were brought in from South Dakota over the weekend to help.

In the park’s South Unit — where residents of the small tourist town of Medora were evacuated last week — the outlook is better. Firefighters were working to completely extinguish that fire Monday or Tuesday, according to Hill. No structural damage was reported in that fire, which burned 3.5 square miles.

Along with a red flag warning for critical fire weather conditions in the western half of North Dakota, record high temperatures in the 70s and 80s were reported over the weekend.

Nearly all counties have implemented some form of outdoors burning restrictions. All counties on Sunday were either in the “high” or “very high” fire danger category. Gov. Doug Burgum has warned that the state is headed into a “tough fire season.”