Pandas are not renowned for their lightning speed, but this wild bear has left web users stunned with its athletic prowess.

In the short clip, the bamboo-eating animal moves swiftly on a slope dotted by shrubs in the county of Baoxing. 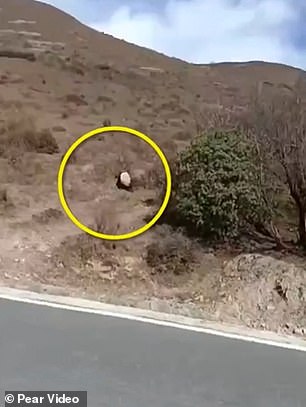 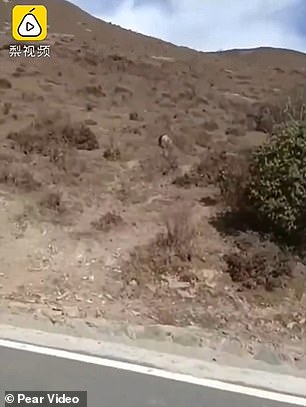 A trending video shows a wild panda running fast on a slope in Baoxing, south-western China

The trending video was filmed by a resident of the village of Gari, whose name is A Chu.

It shows the panda apparently stopping and turning back to look at A Chu after she jokingly shouted ‘big brother’ towards the animal.

After a short pause, the panda carries on running.

‘This was the first time I had seen a wild animal, and I was very excited,’ A Chu told China News.

‘Because it is our national treasure, I called it “big brother”,’ she explained. 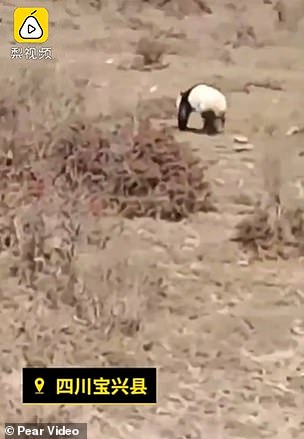 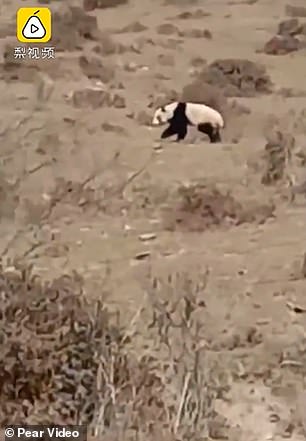 It shows the panda apparently stopping and turning back to look at a villager after she jokingly shouted ‘big brother’ towards the animal. After a short pause, the panda carries on running

This is not the first time giant pandas have amazed people with their running abilities.

Last July, one panda gained the nickname ‘the Usain Bolt of pandas’ after being caught dashing on an uphill path in front of a car also in Ya’an.

The video was taken by an engineer, who was said to be on his way to carry out road works with his colleagues on the Jiajin Mountain.

An eyewitness told China’s Red Star News that he and his co-workers saw the panda cutting in front of them from the left before speeding down the road ahead. 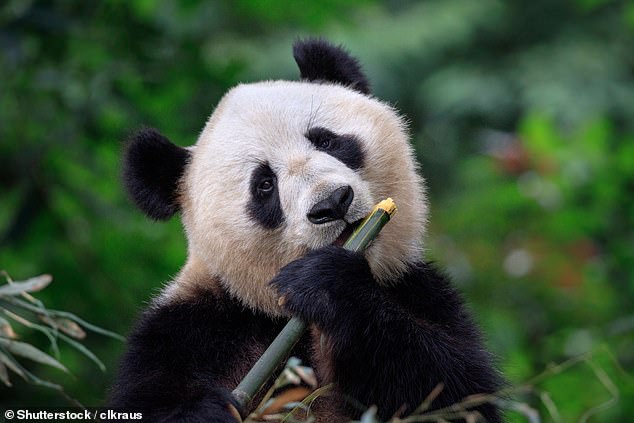 The average moving speed of a wild panda is 26.9 metres per hour, or 88.3 feet per hour

The giant panda, a symbol of China, usually has very slow motion.

The average moving speed of a wild panda is 26.9 metres per hour, or 88.3 feet per hour, according to a 2015 study conducted by Chinese and British scientists.

Experts say that the animals’ lazy daily routine helps them save energy and survive on the poor diet of bamboo.

The research shows that pandas have an incredibly slow metabolism.

Pandas consume 38 per cent as much energy compared to other land mammals of similar size, and they are only a little more active than three-toed sloths.

WHAT DO WE KNOW ABOUT GIANT PANDAS?

While its numbers are slowly increasing, the giant panda remains one of the rarest and most endangered bears in the world.

An estimated 1,864 giant pandas are living in the wild and 548 in zoos and breeding centres around the world.

Experts are unclear what age giant pandas can reach in the wild, but the oldest panda reared in captivity so far was 38 years old.

A wild panda’s diet is 99 per cent bamboo, with the remaining one per cent made up of small rodents.

Four-month-old baby giant panda Xiang Xiang is pictured getting a physical examination at Ueno Zoo in Tokyo on October 10, 2017

Giant Pandas need to consume around 20 to 40 pounds (10 to 20 kilograms) of bamboo each day to get the nutrients they need.

They are around three to four feet tall when standing on all four legs.

Cubs do not open their eyes until they are six to eight weeks of age and are not able to move independently until three months old.

A newborn panda is about the size of a stick of butter, or about 1/900th the size of its mother.