White supporters of the Black Lives Matter movement who are occupying an abandoned Seattle police precinct that has become known as the Capitol Hill Autonomous Zone (CHAZ) are being urged to give $10 to an African American.

A video uploaded to social media shows an unidentified protester giving a speech inside what looks like a baseball field in the CHAZ near the East Precinct in Seattle on Friday in which he encouraged people to donate money to their black comrades.

‘If that is a challenge for you, I’m not sure you are in the right place.’

‘The white people … I see you, I see every single one of you and I remember your faces,’ said the speaker. 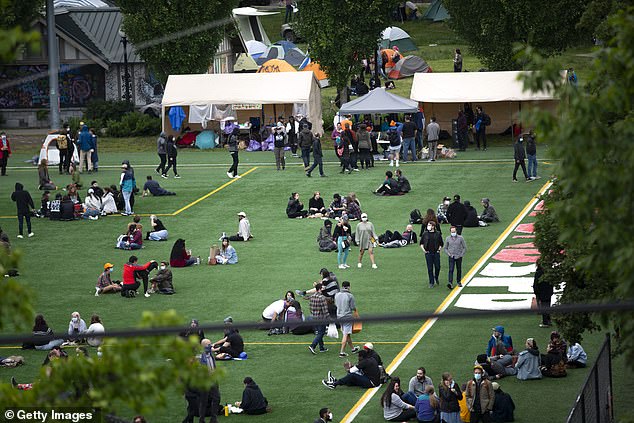 People are seen in Cal Anderson Park, which is located inside the so-called Capital Hill Autonomous Zone (CHAZ) in Seattle on Friday 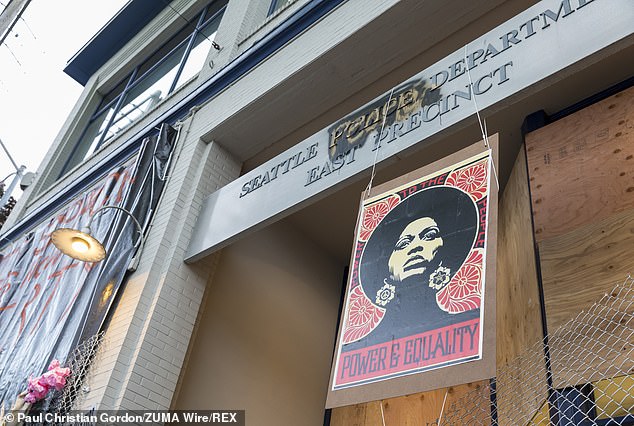 A growing collection of art adorns the facade of the Seattle Police Department’s East Precinct on Friday. The precinct was abandoned on the orders of the mayor 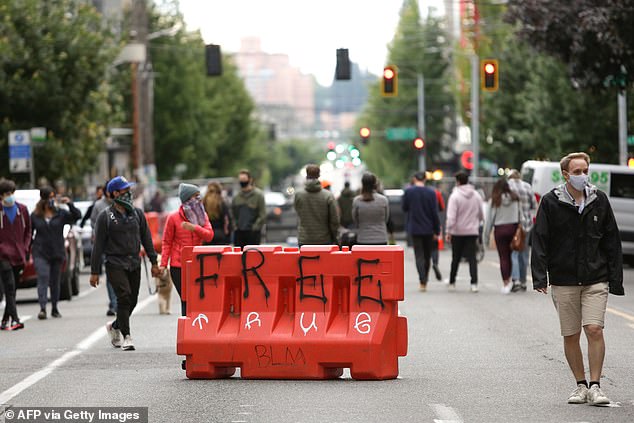 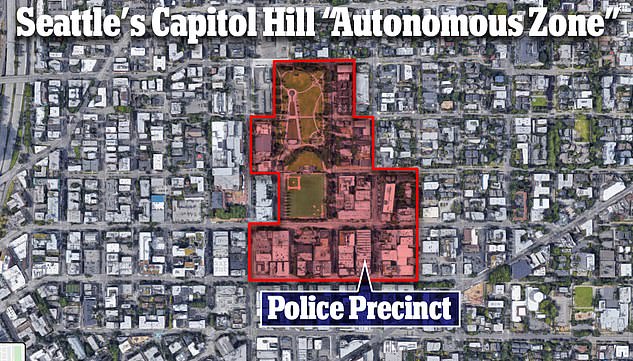 The East Precinct station was the site of near daily confrontations between Seattle police and protesters after the May 25 death of George Floyd.

Floyd, a 46-year-old black man, died in the custody of Minneapolis police. Video from his arrest shows a white police officer kneeling on his neck for almost nine minutes while he struggled to breathe.

His death ignited nationwide outrage as millions took to the streets in scores of cities across the country.

Protesters in Seattle engaged in violent protests with police officers, who used tear gas, stun grenades and pepper spray to try to put down the unrest.

Mayor Jenny Durkan and Police Chief Carmen Best have apologized to peaceful protesters who were subjected to chemical weapons.

But Best has said some demonstrators violently targeted police, throwing objects and ignoring orders to disperse. Both have faced calls to resign, which they have rejected.

A U.S. judge on Friday ordered Seattle police to temporarily stop using tear gas, pepper spray and flash-bang devices to break up largely peaceful protests, a victory for groups who say authorities have overreacted to recent demonstrations over police brutality and racial injustice.

For nearly a week, hundreds of people opposing police brutality and racial injustice have turned a Seattle neighborhood into CHAZ, which has become ground zero for their protests, creating a carnival-like atmosphere with speakers and drum circles near a largely abandoned police station. 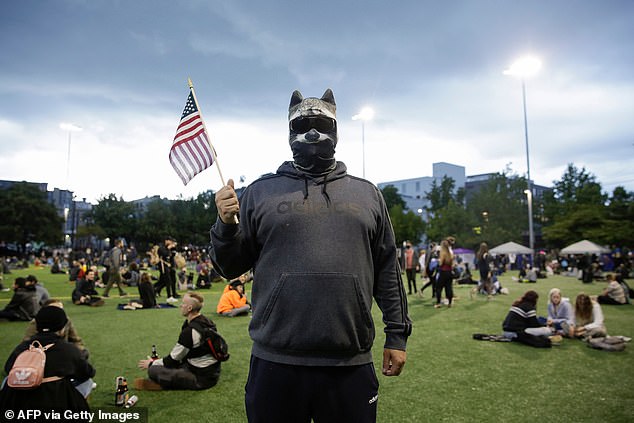 While protesters say it shows how people can manage without police intervention, it’s drawn scorn from President Donald Trump, who has repeatedly threatened to ‘go in’ to stop the ‘anarchists’ he says have taken over the liberal city after officers withdrew to ease tensions.

CHAZ stretches for several blocks in the densely packed Capitol Hill neighborhood just east of downtown Seattle and sprung up after police removed barricades near a police station Monday and largely left the building.

It came after officers used tear gas, pepper spray and flash-bang devices last weekend to disperse demonstrators they said were assaulting them with projectiles.

Signs along the sidewalks proclaim ‘You are entering free Capitol Hill’ and ‘No cop co-op.’

Throughout the day, speakers use microphones to discuss their demands.

Artists have painted a blocklong ‘Black Lives Matter’ mural on the street. Many businesses are still open. 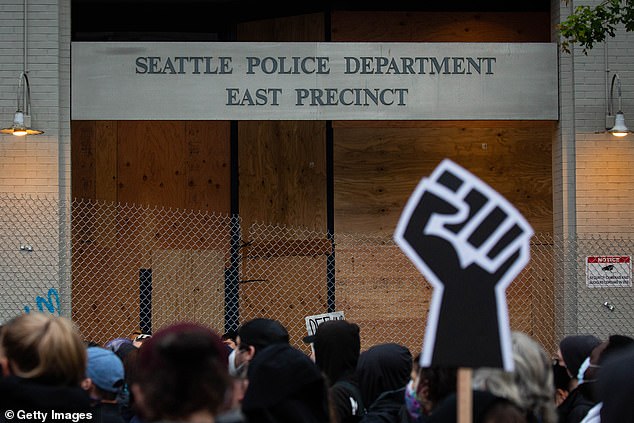 While there are makeshift barricades that block the area to vehicles, people walk in and out freely.

And some officers have been back during the week to check on the police station.

The occupiers of CHAZ come from a variety of groups and interests, ranging from Black Lives Matter organizers to labor and neighborhood groups.

Most want the police precinct to be turned into a community center and much of the department’s funding to be redirected to health and social services.

‘What you see out here is people coming together and loving each other,’ said Mark Henry Jr. of Black Lives Matter.

‘I see people coming from different walks of life … learning from each other.’

In a series of tweets, Trump has taunted Governor Jay Inslee and Durkan and said Seattle had been taken over by ‘anarchists.’

‘These Liberal Dems don’t have a clue. The terrorists burn and pillage our cities, and they think it is just wonderful, even the death. Must end this Seattle takeover now!’ Trump tweeted Friday.

His comments come as he’s pushed for a stronger response to protesters nationwide. Following last weekend’s unrest, the protests in Seattle have been largely peaceful. 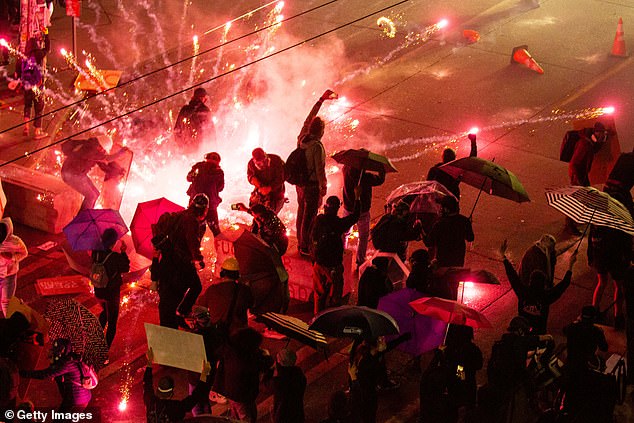 In a Thursday interview with the Fox News Channel, the president said, ‘If we have to go in, we’re going to go in. These people are not going to occupy a major portion of a great city.’

In response, Durkan said it would be ‘unconstitutional and illegal to send military to Seattle.’

Best said the decision to leave the Capitol Hill precinct wasn’t hers and she was angry about it. In a video message to officers this week, she also reiterated that police had been harassed and assaulted during protests.

‘Ultimately, the city had other plans for the building and relented to severe public pressure,’ Best said.

Durkan said in a statement that she decided to remove the barriers around the station in an effort to deescalate tensions.

Best said in an interview Friday on Good Morning America that officials had to remove some personnel for a short period, then it became unsafe for officers to go back.

Police initially said protesters in the ‘autonomous zone’ had harassed and intimidated residents and businesses but later eased off those statements and said they had no concrete evidence of that.

While Best said she supports free speech, ‘this is not that.’

The police chief said Friday that officials were working to get officers back into the precinct, stressing the ‘need to have officers responding to calls in a timely fashion. And with the occupation that’s taking place, we’re not able to do so in a timely way.’

She says police want to ensure they’re responding to community concerns, keeping people safe and making their response ‘proportionate to what we’re addressing.’

On the first weekend of protests in late May, there was widespread destruction downtown as people smashed storefront windows and stole merchandise. 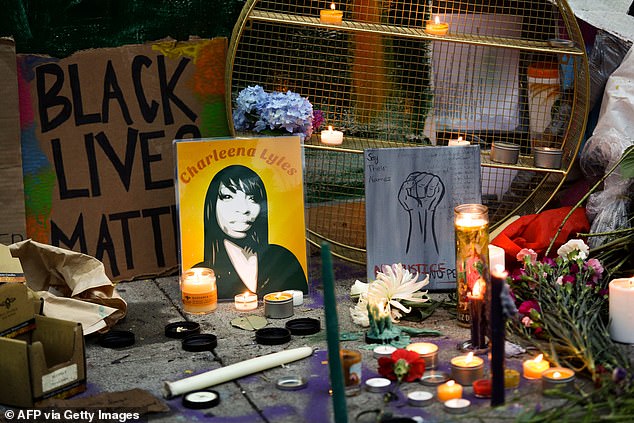 A shrine and a photo of Charleena Lyles are pictured in part of the CHAZ on Friday. Lyles was a 30-year-old black woman and pregnant mother of four who was fatally shot by Seattle police in 2017. The white officers who shot her say she lunged at them with a knife

Last weekend, police used tear gas to disperse crowds on Capitol Hill that they said had become unruly, soon after pledging to temporarily stop using a type of tear gas.

Some City Council members and other elected officials say authorities overreacted, and both Durkan and Best have faced calls to resign.

The new court ruling added to the criticism, saying a Black Lives Matter group that sued this week made a strong case that the indiscriminate use of force during largely peaceful protests is unconstitutional.

The federal judge said weapons like tear gas and pepper spray fail to target ‘any single agitator or criminal’ and are especially problematic during the coronavirus pandemic.

The mayor said she doesn’t want a repeat of last weekend’s violence and tweeted that she visited the Capital Hill area Friday to speak with organizers about moving forward.