THIS map shows the countries where the new mutant strain of the coronavirus has so far been detected.

The new strain, named VUI 2020/01 has spread to almost all corners of the UK and has now been detected as far away as Australia. 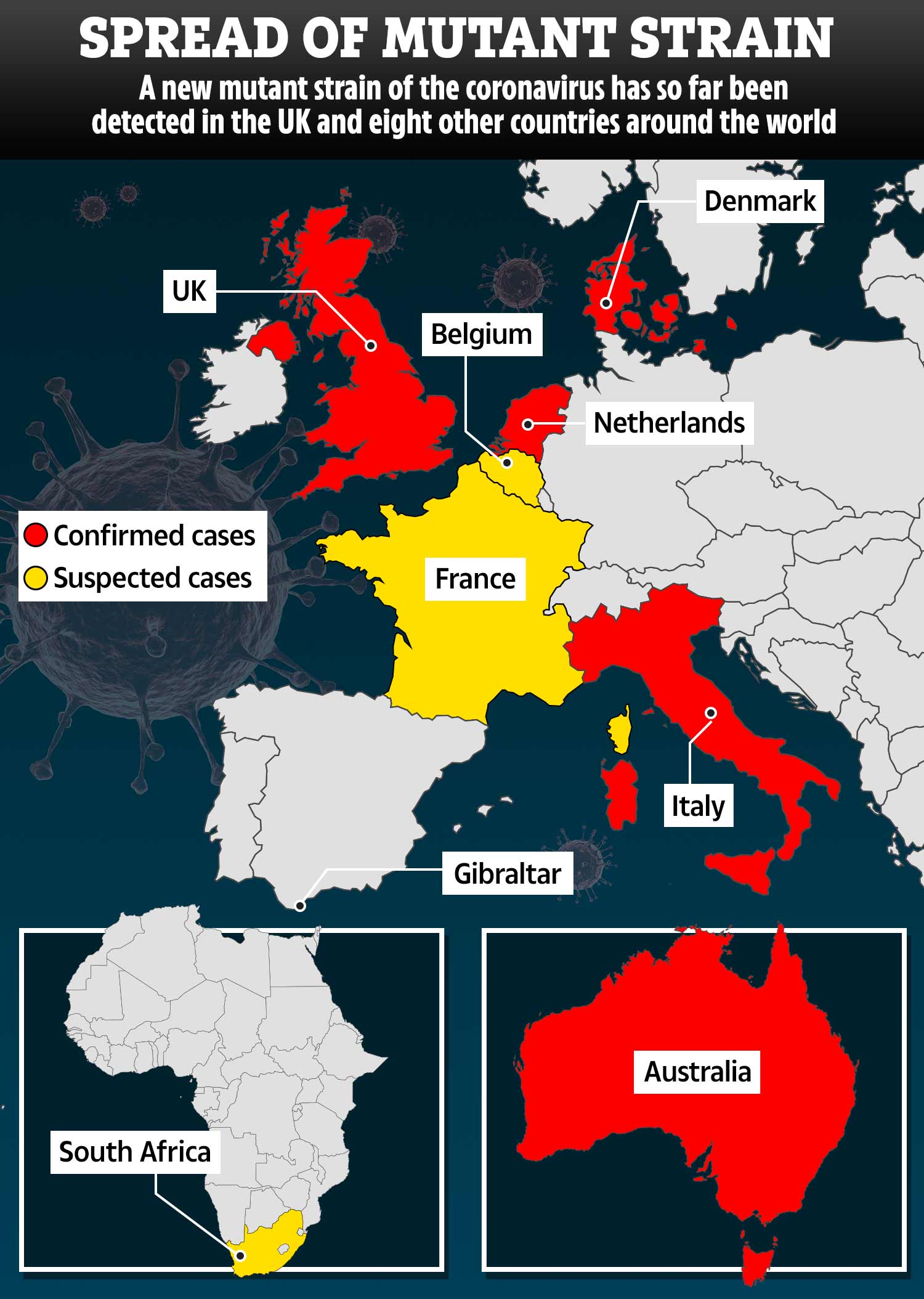 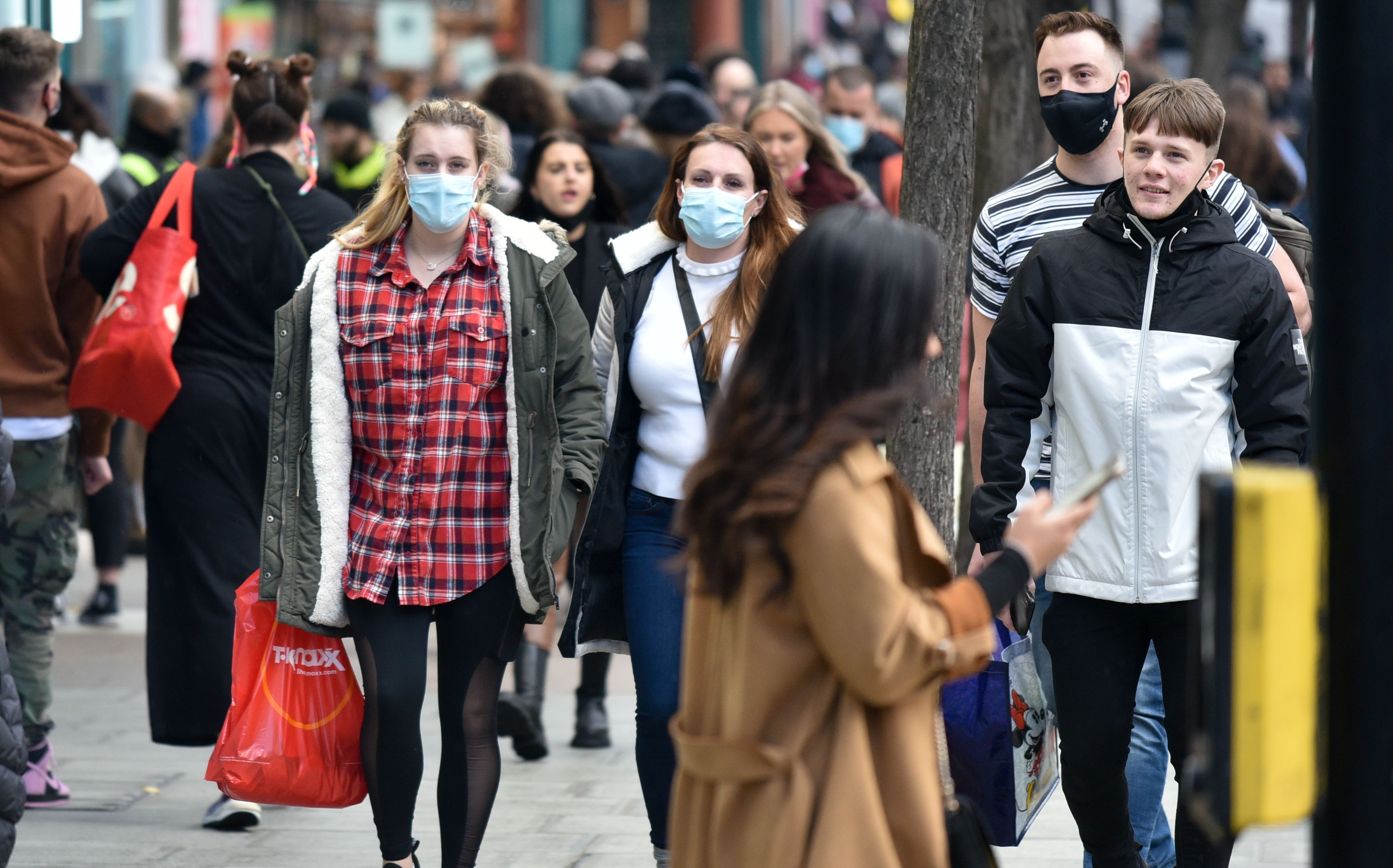 The new strain, thought to be up to 70 per cent more infectious than the original, was first detected in London earlier this month and has now been identified around the world.

France and South Africa now believe that they have cases of the new strain, but this has not yet been confirmed.

French health minister Olivier Veran said it's "entirely possible" that it could be circulating in France.

The virus is present in all parts of the UK except Northern Ireland and it has now started to rip through the rest of Europe.

She said other cases had been confirmed in Australia and the Netherlands on Sunday night.

The health ministry in Italy yesterday confirmed that a couple who had landed in Rome had tested positive for the new strain and were currently in quarantine.

Experts in the Netherlands have also taken samples from patients and found that the new strain was present in their system.

Two cases in New South Wales, in Australia were also detected from a couple that had flown in from the UK.

Experts in South Africa have claimed to have found a strain similar to the one detected in the UK – but it has not yet been confirmed whether or not it is the same strain.

What is the new Covid strain?

The public were first alerted to the new strain of the virus on December 14, when the Health Secretary Matt Hancock said it may be fuelling the surge in cases in the South.

The new strain has been named VUI – 202012/01 – the first variant under investigation in December.

It was first identified in September, according to scientists at COVID-19 Genomics UK Consortium (COG-UK), who have been working with Public Health England (PHE).

The first case was found in Kent on September 20, followed by London the next day, according to a report on behalf of COG-UK.

The South East is currently fighting an uphill battle with the disease, and has some the highest Covid cases in the UK, forcing ministers to put it under Tier 4 restrictions.

Speaking at a No10 briefing on December 19, the Prime Minister said the new strain is up to "70 per cent more transmissible" than the original version of the disease".

He stressed it is early data but told the public "it's the best we have at the moment", adding it could see the R rate increase by 0.4.

The R rate is how many people an infected person passes the disease on to, and is currently 1.1 to 1.2. It must be kept below 1 in order for the outbreak to shrink.

Government scientists at PHE's Porton Down lab are analysing the strain to assess how dangerous it is, but so far there is no sign it can cause more severe disease.

Read more about the strain on The Sun's explainer.

The mutant strain's origins are still being probed by Public Health England laboratories at Porton Down, Wiltshire.

With no concrete evidence so far explaining how and where it comes from, it can only be assumed to have emerged in England — because that was where most of the known cases were originally reported.

Scientists believe it mutated within a Covid patient's body.

The new variant appears to be prominent in and around the south of England.

At least a third of cases in England have been blamed on the new strain – more than double the figure a month ago.

What proportion of cases are caused by the new strain?

In the week to December 9, the percentage of cases caused by the new strain are as follows:

East of England: 59 per cent

Yorkshire and the Humber: 5 per cent

By country in the UK:

Wales is close behind, with 28 per cent of cases blamed on this strain which was only revealed to the public last week.

Some 14 per cent and 12 per cent have been attributed to the strain in Scotland and Northern Ireland, respectively.

Looking closer at England, more than 60 per cent of cases in London were caused by the new strain in the week to December 9, experts say.

The East of England comes in at a close second, with 59 per cent, followed by the South East with 43 per cent.

Swathes of these regions have been plunged into Tier 4 to try and stop people from taking the new strain into other parts of the UK.

But it may be too late, data shows, amid concern another national lockdown will be necessary.

Although in smaller numbers, the new strain has been detected everywhere.

For that reason, scientists are questioning why more of the UK is not under Tier 4.

After the Downing Street briefing on Saturday, Prof Jonathan Stoye, Retrovirus-Host Interactions Laboratory, The Francis Crick Institute, said: “I’m not certain that I understand the rationale of a partial imposition of Tier 4 rules.

"If enhanced restrictions are required to control the spread of the variant, why aren’t they being imposed across the whole country?"

WHAT ABOUT THE VACCINE?

Government experts have said the results from testing will take a couple of weeks, as scientists at Porton Down in Wiltshire scramble to analyse the variant.

They are growing samples of the strain and, once these are ready, will add serum taken from patients who have received the vaccine to test the response.

Experts yesterday said that the scientists on the New and Emerging Respiratory Virus Threats Advisory Group (NERVTAG) team are “being careful” with their analysis.

He added: “If there was a rave of several thousand people where this variant was introduced and infected many people mostly in that rave, this may seem very high compared to a lower background of non-variant virus, e.g. in an otherwise prevailing national lockdown.

“The NERVTAG team appears to be being very careful about such comparisons – and possible ‘founder effects’ that might be misleading – which is good.”

Concerns have been raised due to the variants in spike protein – which is the part of the virus which latches on to human cells.

The Pfizer/BioNTech jab, which is already being rolled out across the UK, works by targeting this particular protein.

Experts are also concerned that people who caught the old strain of the virus could be susceptible to it again.

The Telegraph reported that the Ministry of Defence is researching the strain at Biosafety Level Three – which is one below the highest tier which is reserved for weapons-grade threats.

Chief Medical Officer for England, Professor Chris Whitty said it was vital that the public continue to follow the rules as scientists try to understand the new strain.