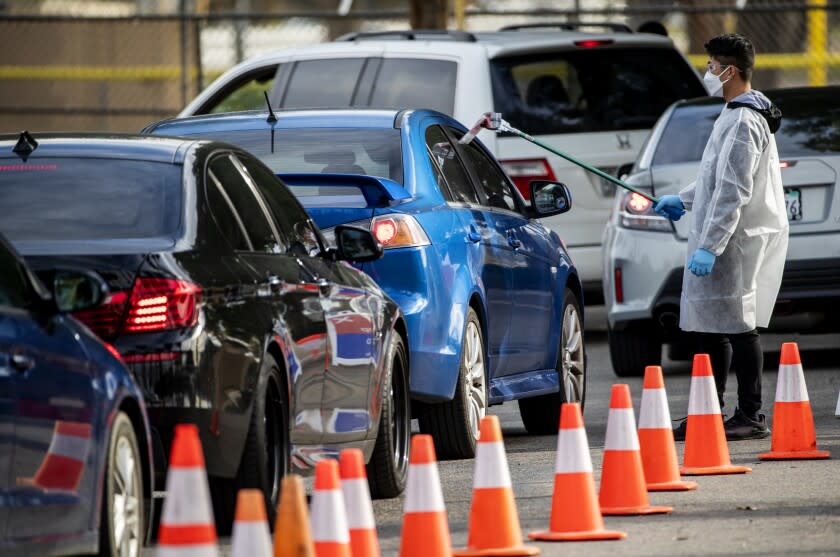 The Omicron variant arrived in the United States right around Thanksgiving. Less than a month later, it's the country's dominant coronavirus strain, accounting for 73% of new infections last week, according to the Centers for Disease Control and Prevention.

How did that happen? Infectious disease experts say there are two key factors that determine how quickly a virus will spread: how easily it is transmitted and how well it eludes the body's defenses.

Early research suggests Omicron has advantages in both areas. But the data also suggest the variant's higher rate of transmission hasn't led to more hospitalizations or deaths.

Preliminary results from a Dec. 14 study led by Alejandro B. Balazs of the Ragon Institute in Cambridge, Mass., found that Omicron was twice as infectious as the Delta variant and four times more infectious than the original virus. That study, which has yet to be peer-reviewed, relied on a relatively small sample of 239 patients in and around Boston, so the results may not be representative of Omicron's behavior in general.

Nevertheless, said Dr. David Pride, an infectious disease specialist at UC San Diego, "just looking at [the current situation] epidemiologically, we know something is way different this time around."

With so many unvaccinated people out there, he added, "it was just a matter of time before we'd see a mutated version of the virus that is just better at infecting vaccinated people."

It's practically an evolutionary imperative, said Jasmine Plummer, a research scientist at Cedars-Sinai Medical Center in Los Angeles who was part of the team that discovered the Epsilon variant of the virus last winter.

"Variants arise because of viruses trying to survive," Plummer said. "All viruses evolve to evade their host. So we knew an Omicron was coming."

And here we are.

One secret of Omicron's success appears to be its ability to replicate rapidly. Researchers from the University of Hong Kong reported that compared with Delta, Omicron "infects and multiplies 70 times faster" in the bronchus, the main airways into the lungs. Its advantage over the original virus is even greater, they added. The difference was apparent a mere 24 hours after infection.

If that's indeed the case, it means that people infected by the Omicron variant have a lot more virus in their throats waiting to be expelled into the air when they exhale — and especially when they cough or sneeze. It also suggests that they may be infectious sooner, which also would speed the spread of the disease.

One potentially helpful sign from the Hong Kong research: Omicron moved more slowly from the throat into the lungs. In their experiments, the scientists found the new strain replicated in the lungs at less than one-tenth the rate of the original virus. That "may suggest lower severity of disease," according to the university.

Pride said Omicron is spreading more easily within households, suggesting the virus gets spewed into the air more easily. Another possibility is that a smaller amount of Omicron is required to cause an infection, he said.

There's a lot we still don't know about how the Omicron variant is transmitted, but the CDC expects that "anyone with Omicron infection can spread the virus to others, even if they are vaccinated or don’t have symptoms."

Pride put it another way: "We know this disease spreads via people, thus the only way to be pretty sure you’re not going to get it is to not be around people."

The coronavirus that causes COVID-19 employs a spike-shaped protein on its surface to penetrate healthy cells and use them to churn out copies of itself. The vaccines available in the United States prompt the creation of antibodies that recognize that spike protein and target it for destruction by the body's immune system.

Omicron has an unprecedented number of mutations that affect the spike. About three dozen were tallied by Balazs and his team, and their location suggests they make it more difficult for antibodies to recognize an Omicron virus particle. That's true regardless of whether the antibodies were generated by a vaccine or a previous infection, they wrote.

Researchers at the University of British Columbia in Canada examined the Omicron proteins affected by those mutations on a molecular level. They found that, on balance, the changes enabled the spike protein to bond more strongly to human cells than the original coronavirus could. They posted their findings on BioRXiv, a site where scientists seek feedback on preliminary work.

Sriram Subramaniam, the senior author of the study, said in an interview with the university that even small changes in the spike protein "have potentially big implications for how the virus is transmitted, how our body fights it off, and the effectiveness of treatments."

He added: "Our experiments confirm what we’re seeing in the real world — that the Omicron spike protein is far better than other variants at … evading the immunity produced by both vaccines and natural infection."

Subramaniam said it was notable that the immunity generated by vaccines was more effective against Omicron than the immunity from a previous infection in unvaccinated patients. It's another sign "that vaccination remains our best defense against the Omicron variant," he said.

But that defense may not be very effective without a booster.

Balazs' study found that the protection afforded by vaccines or a previous coronavirus infection was "dramatically decreased" against Omicron. The one exception was in people who'd recently received a booster dose of the vaccine; they "exhibited potent neutralization of Omicron," according to the study.

That may help to explain why "breakthrough" cases and reinfections appear to be rising rapidly. A South African research team reported on Dec. 2 more than 35,000 COVID-19 reinfections among the 2.8 million people who'd tested positive over the previous three months.