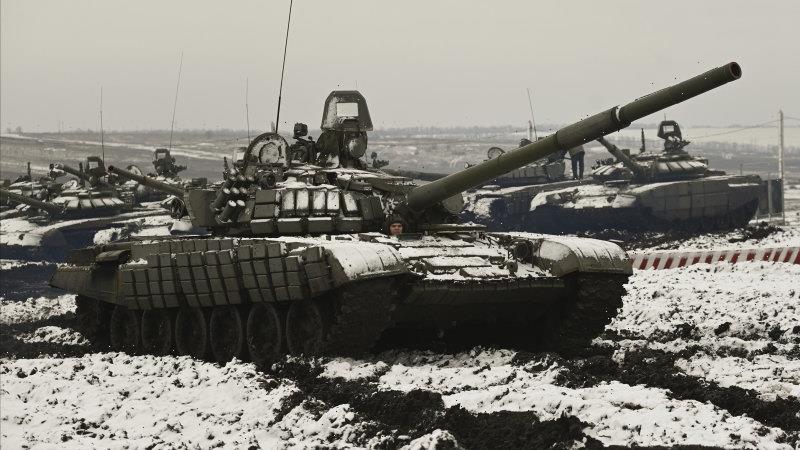 London: Britain became Europe’s most generous donor to Ukraine after Boris Johnson last week pledged an additional £300 million ($526 million) in military aid. It added to a flood of Western arms helping Kyiv’s soldiers repel the advances of Putin’s army, which many feared would sweep the battlefield with little trouble.

As the “arsenal of democracy” backs Ukraine, however, researchers have warned a sinister parallel is also playing out: our technology has also been aiding Russia. 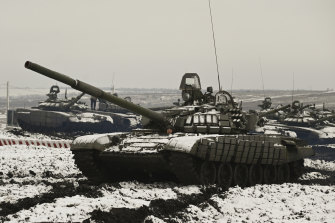 They examined equipment abandoned by Kremlin forces during the conflict, including the feared T-72B3 battle tank, mobile jamming systems, some cruise missiles, drones and radios.

“There is a consistent pattern across all major Russian weapons systems recovered from the battlefield,” says the RUSI report, authored by Dr Jack Watling and Nick Reynolds.

“Almost all of Russia’s modern military hardware is dependent upon complex electronics imported from the US, the UK, Germany, the Netherlands, Japan, Israel, China and further afield.”

Russia has been forced to import foreign components because their own manufacturing industry – a shadow of its Cold War self – lacks the capability to make them domestically.

How the Western components got there is concerning and complicated, experts say. In theory, export restrictions have banned companies from supplying parts with military applications to Russia’s armed forces since the 2014 invasion of Crimea.

But most are classed as “dual use”, with both civilian and military applications. This means they are ubiquitous and generally easier to slip past customs authorities.

In one example identified by RUSI, a Borisoglebsk-2 mobile jamming system was found to contain electronics made in the UK, US, Germany, South Korea, Taiwan and the Netherlands, including British-made transistors.

Reynolds won’t reveal the identities of the manufacturers and points out they may not even know their products ended up in Russia. This is now being investigated by the British government. 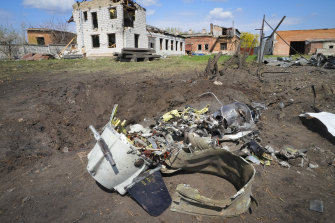 Fragments of a Russian missile lie on the ground in Fastov, south of Kyiv.Credit:AP

Experts say the findings lay bare how dependent the Kremlin has become on complex Western electronics since the fall of the Soviet Union.

While the highly militarised Soviet economy was almost totally self-reliant when it came to arms production during the Cold War, Russia’s industrial base shrunk through the 1990s and much of the 2000s. That left it relying on other countries for the parts needed for weapons such as the 9M729 cruise missile, which uses an onboard computer to manoeuvre at low altitudes before striking with great precision.

This weakness may already be playing out in Ukraine, where RUSI says the Russians are cutting back on using the most sophisticated weapons – possibly because fresh sanctions make them more difficult to produce and supplies need to be conserved.

While efforts by the West to choke off component supplies could be a potent way to weaken Putin’s forces, this could prove tricky because of the smuggling network built up by Russia over the years. According to Reynolds, the Kremlin’s agents make use of front companies, middlemen and even blackmail to achieve their goals. “I would not want to point the finger at all the companies involved, because some are unwitting,” he says. “But some are controlled by Russia and some are collaborating.” 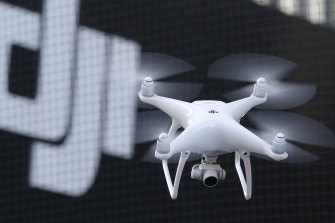 A Phantom 4, developed by major Chinese consumer-drone maker DJI, which has temporarily suspended business activities in Russia and Ukraine to prevent use of its drones in combat, in a rare case of a Chinese company pulling out of Russia. Credit:AP

Though the origins of the components described in the RUSI report have not yet been explained publicly, a previous piece of work provides a useful example.

Five years ago, Ukrainian forces battling Russian-backed separatists in the country’s east shot down a drone conducting surveillance. When investigators disassembled the two-metre long aircraft, they discovered it was full of Western parts.

Attempting to piece together how they got there, London-based Conflict Armament Research (CAR) found the drone’s single-cylinder engine was made by a German supplier for model aeroplanes, 3W-Modellmotoren, which had sold it to World Logistic Group, a Russian-owned firm based in the Czech Republic, in 2013.

World Logistic Group was dissolved in 2018. One of its directors was a Russian with “links to political and security agencies of the Russian government”, according to CAR, although it said there was no proof the company acted for the Kremlin. There is also no suggestion of wrongdoing by 3W-Modellmotoren.

Other parts included a radio chip sold by a US-based company and an internet chip made in South Korea.

Alongside these was a movement sensor chip – known as an accelerometer – made by UK-based Silicon Sensing Systems. It had been sold to a Russian electronics company called Radiant Group in 2013.

Silicon said it had been told by Radiant that the end customer was a company serving “various educational institutions around Russia”. No export licence was required for the sensor, which was sold before restrictions were imposed on Russia, and Silicon continued to supply products to Radiant from 2014 to 2021.

However, according to CAR, Radiant’s end customer was “PO KSI”, a major Russian military supplier that was sanctioned by the US in 2016.

The researchers came across several other drones with Western parts, many of which had their identifying marks “obliterated”, which concealed their true origins. CAR’s report noted the components had been obtained by Russia “despite the EU arms embargo”.

It warned this was partly due to a “general lack of clarity regarding the end use or end user of components, as well as opaque licensing requirements for dual-use components”.

The findings also highlight how the parts are often traded through third countries, where businesses and officials may turn a blind eye.

Meanwhile, in many cases, the “off the shelf” nature makes the buying of parts harder to control, says Dr Richard Connolly.

The Russia defence industry expert, who runs Eastern Advisory Group and is a RUSI associate fellow, says civilian components such as cameras that can be bought online are often just as cutting-edge as the kit deployed by modern militaries – sometimes even more so.

A growing embargo on business with Russia imposed by the US, UK and EU is making it harder for it to obtain vital microchips from countries such as Taiwan, where the foundries rely on equipment licensed from the West.

That could end up pushing Russia further into the arms of China or force it to collaborate with a third country such as India to build new military platforms, he adds.

RUSI has suggested the UK and its allies may have to impose export restrictions on some of these third countries to keep up the pressure.

Connolly says it is far-fetched to expect these measures can “bring the Russian military machine to a halt”.

“But equally, it will cause them problems,” he says. “It will cause disruption, it will make it more expensive for them to wage this war – and, hopefully, any other future wars.”