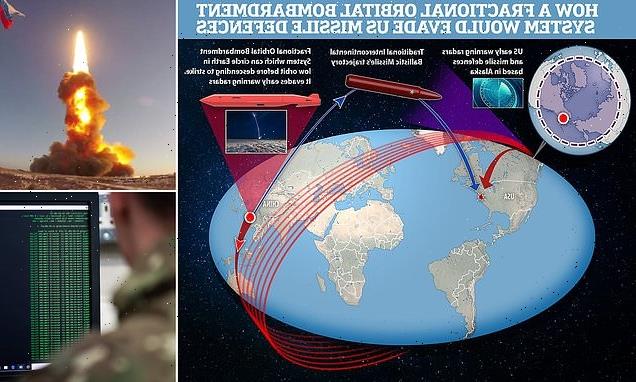 Missiles flying at 27 times the speed of sound, shooting down satellites and cutting Internet cables at the bottom of the sea: West race with Russia and China to get ready for war of the future

The future of warfare will see the use of hypersonic missiles and the internet cut off in seconds, experts warned today.

Technology is now the battleground where conflicts will be fought with Russia and China said to be investing huge amounts in the field.

Money spent on traditional weaponry and hardware has gone down with British defence and security investing more in digital, AI and cyber tech.

In fact there have even been ‘training exercises’ from Russia and China just months ago.

On November 16 Russia destroyed one of its own satellites in space by firing a missile at it.

And in October China tested a top secret weapon that can circle the globe at 21,000mph and descend from space to strike anywhere on Earth in minutes. 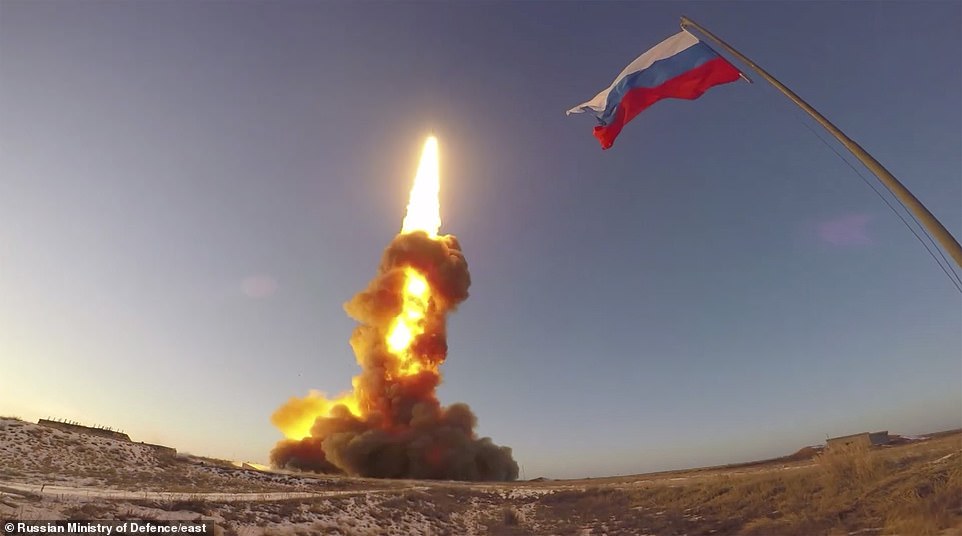 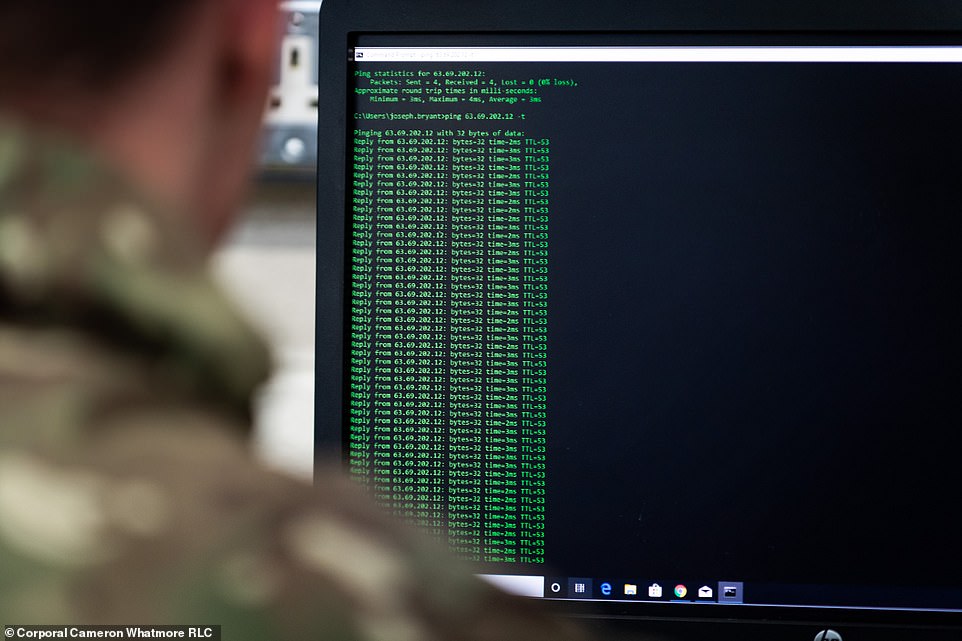 Cyber warfare is already a battlefront countries attack each other on, but this will increase as technology gets more advanced 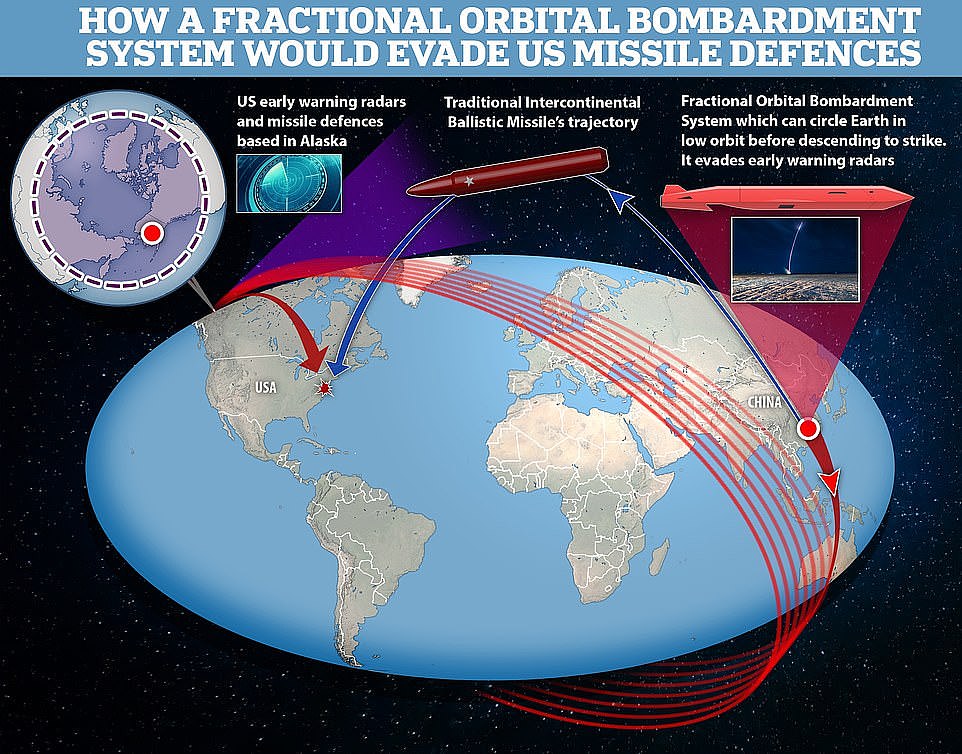 It is designed to travel in low orbit to dodge missile detection and defence systems, allowing China to strike virtually anywhere on the planet with little or no warning.

Michele Flournoy, former Pentagon policy chief for US strategy under both Presidents Clinton and Obama, warned: “We are really at a strategic inflection point where we – the US, the UK and our allies – are coming out of 20 years of focusing on counter terrorism and counter insurgency, the wars in Iraq and Afghanistan, and lifting our gaze to realise we are now in a very serious great-power competition.

“While we were focused on the broader Middle East, these countries went to school on the Western way of war. And they started investing massively in a whole host of new technologies,” she added to the BBC.

The U.S. and Russia have also spent decades working on their own hypersonic systems and the two countries have conducted tests on the weapons in recent months. 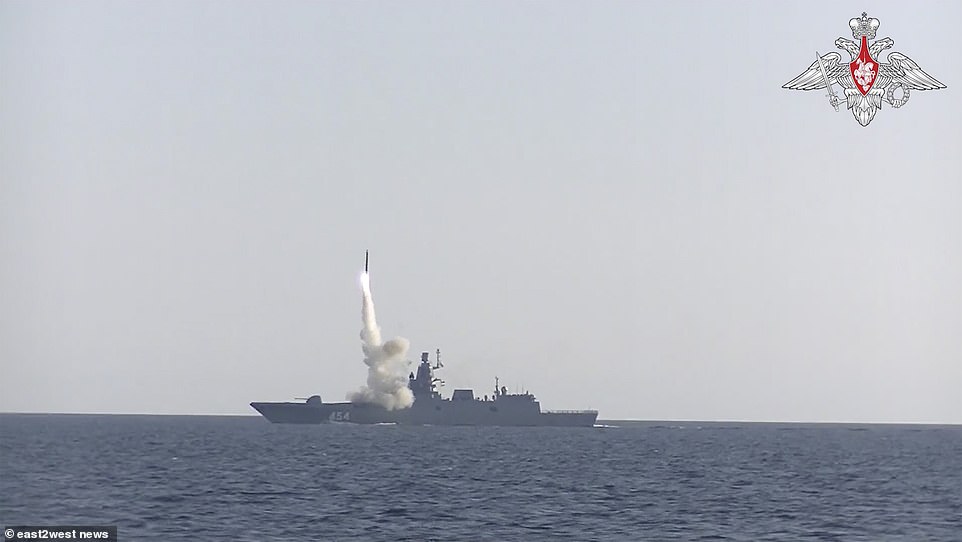 The Zircon is due to go into service next year, and will first be deployed via the Admiral Golovko frigate (pictured) which carries significant stealth-technology 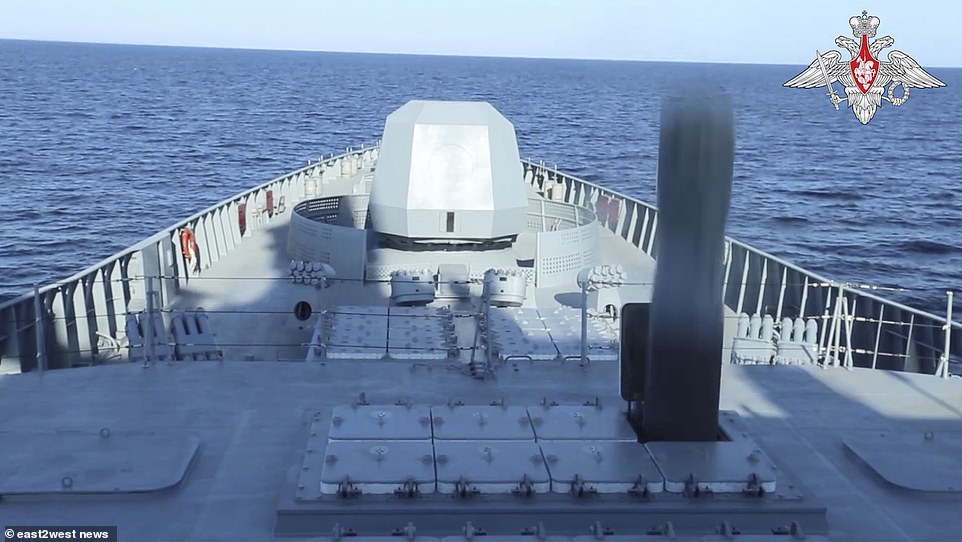 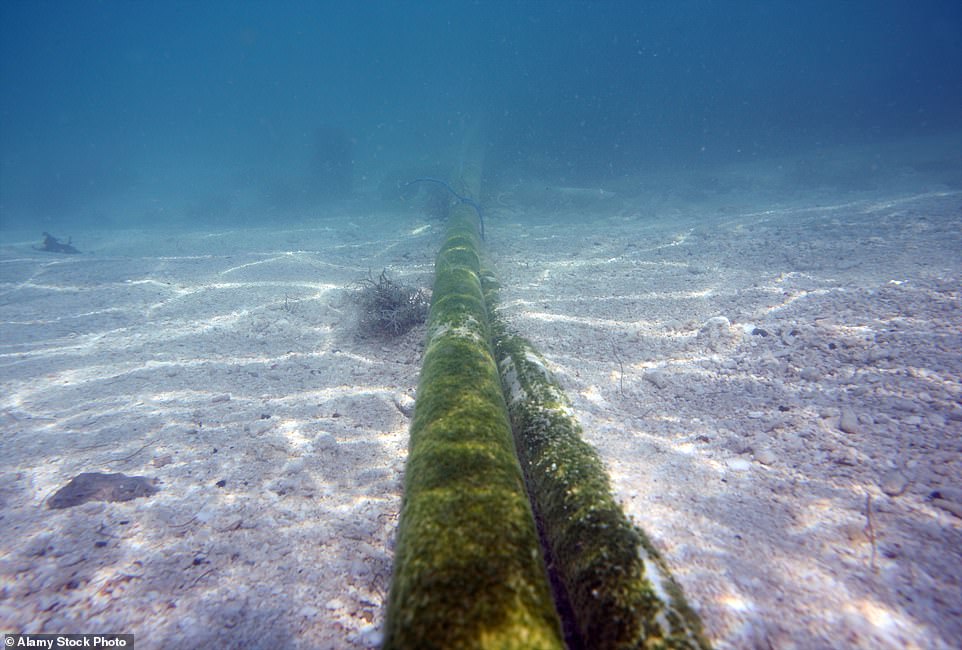 There have also been worrying leaps by some countries in disruptive cyber attacks, such as stealing data and trying to influence elections.

Experts think if full-scale hostilities ever broke out, sides would try to cut off communications for the opponent.

It would include targeting satellites or even as simple as disrupting undersea cables that carry data. 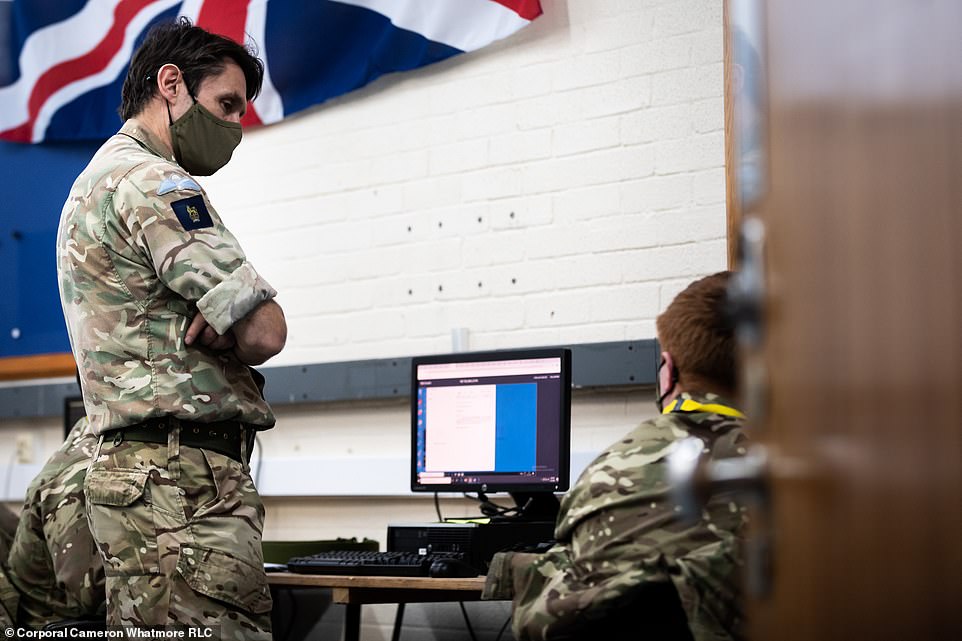 In a year when the UK has seen an increase in cyber threats, teams from across the British Army regular and reserve forces, the Royal Navy, France and Denmark were tested in the exercises earlier this year 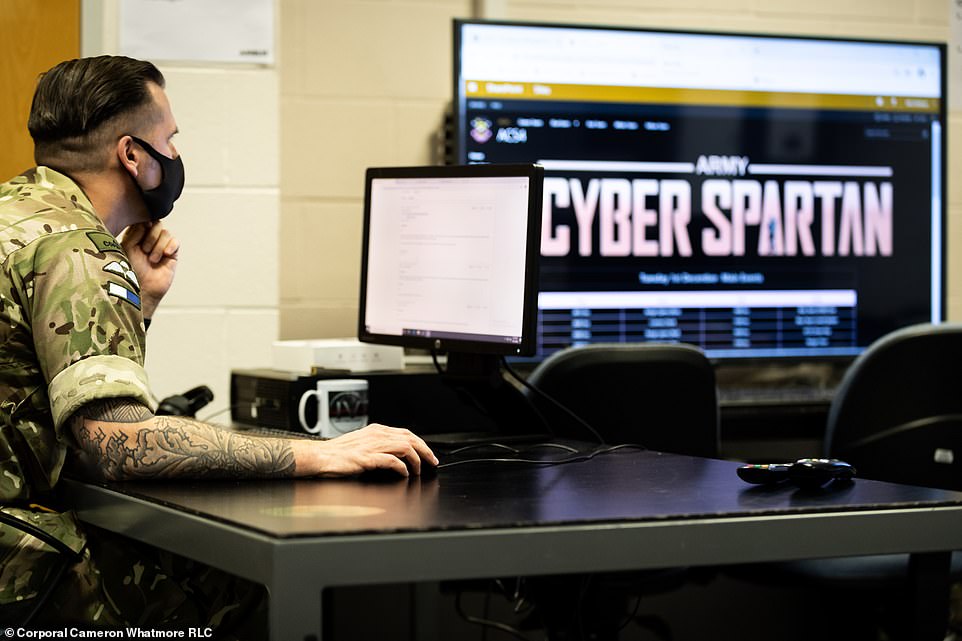 A soldier from the Royal Signals sits at his computer during the Army Cyber Spartan 4 competition. Over 400 UK and international defence cyber specialists and novices took part in the UK’s biggest cyber competition

“I think this would play out in a very fast-paced environment that’s heavily reliant on the information domain,”

Franz-Stefan Gady, a specialist on future warfare at the IISS, told the BBC phones could suddenly stop working and petrol stations run dry.

He added: ‘Great powers are massively investing not only in offensive cyber capabilities but also in electronic warfare capabilities that can jam satellites and bring down communication.

So not just the military but societies overall will be a prime target in future conflict.”

A high time for hypersonic missiles – but who has what? 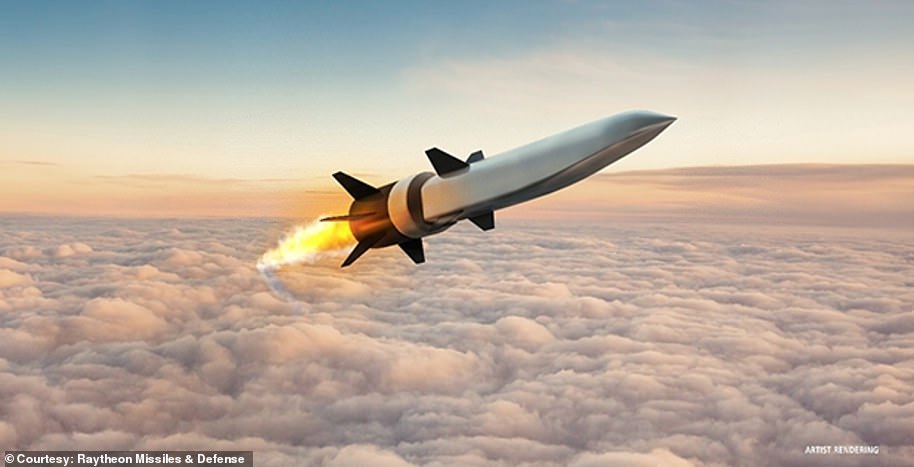 The US military has a number of hypersonic weapons programs across the Navy, Army and Air Force but most are still in development phase and highly top secret.

However the known programs are all more conventional hypersonic weapons that strike from high altitude, rather than orbital bombardment systems that strike from space which the Chinese were revealed to have developed tis week.

The only US hypersonic weapon know to have been successfully tested is the Air Force’s GM-183 ARRW which is designed to be launched from a large bomber aircraft.

It then accelerates to hypersonic speeds using of up to 15,345mph using a supersonic combustion ramjet to strike targets within 1,000 miles. Donald Trump refered to a ‘super duper missile’ while in office and this is believed to be the AGM-183 ARRW.

The Navy’s submarine launched Long Range Hypersonic Weapon is expected to be operational by 2023 and will have a range of 1,725 miles.

Darpa, the US army’s scientific wing, recently announced successful tests of what it called a HAWC missile (Hypersonic Air-breathing Weapon Concept) but kept details such as range, speed and payload secret.

The missile uses oxygen in the atmosphere as part of its fuel – marking the first successful test of that class of weapon since 2013.

The missile, which is built by Raytheon, was released from an aircraft just ‘seconds’ before the scramjet engine from Northrop Grumman kicked on, Defense Advanced Research Projects Agency (DARPA) said.

The engine works by compressing incoming air with hydrocarbon fuel to create a fast airflow mixture, one capable of reaching over 1,700 meters per second, or five times the speed of sound.

Earlier this year, a test of a hypersonic missile from the U.S. Air Force was abandoned after it was unable to complete its launch sequence.

On March 19 last year, the Pentagon flight-tested a hypersonic glide vehicle at its Pacific Missile Range Facility in Kauai, Hawaii. It deemed the test a success and “a major milestone towards the department’s goal of fielding hypersonic warfighting capabilities in the early- to mid-2020s.”

Unlike Russia, the United States says it is not developing hypersonic weapons for use with a nuclear warhead. As a result, a U.S. hypersonic weapon will need to be more accurate, posing additional technical challenges.

In 2019, DailyMail.com reported that the Raytheon and Northrop Grumman-developed missile would use an engine made by a 3D printer.

Last year, DARPA said it was working with Aerojet Rocketdyne on a nearly $20 million project to develop a hypersonic rocket that could intercept enemy missiles mid-air. 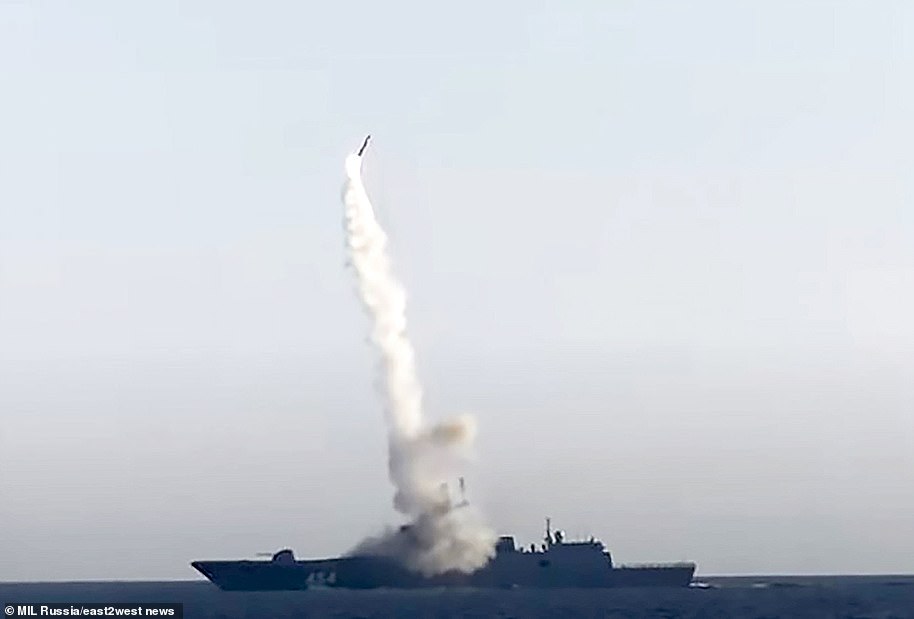 Russia recently launched a hypersonic missile, the Zircon, from a submarine and has the hypersonic nuclear-capable Avangard missiles

Russia recently launched a hypersonic missile, the Zircon, from a submarine, and since late 2019 has had the hypersonic nuclear-capable Avangard missiles in service. The Avangard can travel at up to Mach 27, changing course and altitude.

The range of Russia’s hypersonic missile, the Zircon, is 621 miles with a speed of 9,800mph.

But the missile flies below the atmosphere and uses fuel to power itself to hypersonic speeds rather than the Earth’s orbit.

Earlier this month, Russia  announced it has successfully test-fired the Zircon from a nuclear submarine for the first time.

The 6,670mph weapon hit a target in the Barents Sea according to the Moscow defence ministry, who claims the missile is capable of Mach-9 speeds and able to evade all Western defences.

Russia said it had completed flight tests of the new-age missile from a frigate – the Admiral Gorshkov – and a coastal mount, but it had not previously been launched from a submarine.

The Zircon has been identified by Moscow’s state-controlled TV as Vladimir Putin’s weapon of choice to wipe out coastal American cities in the event of an atomic conflict.

He has declared the missile as ‘truly unparalleled anywhere in the world’, and the Russians have boasted it is ‘unstoppable’ by Western defences.

Putin first announced the development of an array of new hypersonic weapons in 2018, insisting that they would be able to hit almost any point in the world and evade a US-built missile shield.

The Zircon is due to go into service next year, and will first be deployed via the Admiral Golovko frigate which carries significant stealth-technology.

A key use of the missile is taking out enemy ships and reports suggested its maximum range is between 188 and 620 miles.

But there have been unconfirmed reports its true range is some 1,200 miles.

The missile system’s design and development have been conducted in deep secrecy, and Putin has warned that foreign spies have tried to steal its secrets.

It is one of a number of hypersonic missiles Russia is deploying including the 188-tonne Sarmat – known in the West as Satan-2 – which will be the biggest beast in Russia’s nuclear arsenal, due for tests in the autumn with deployment slated for next year.

In May, Russia said it tested three ‘invincible’ hypersonic ‘Satan 2’ missiles that some have said could wipe out areas the size of England and Wales. 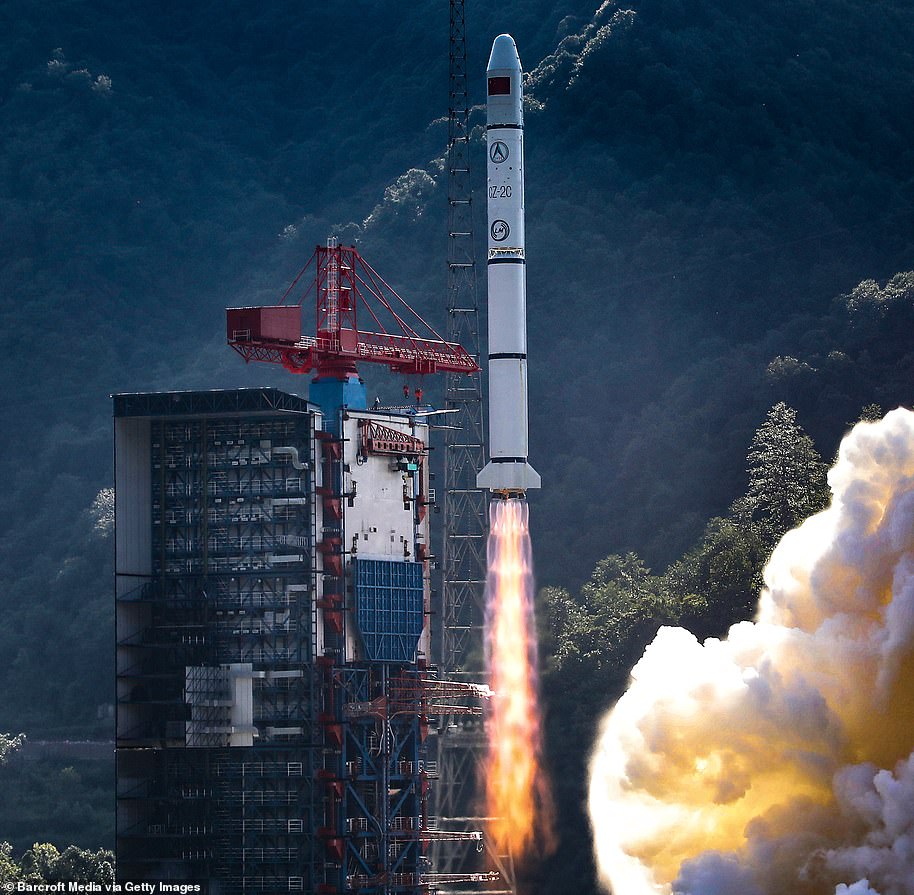 The hypersonic orbital bombardment system that China tested in August reportedly reaches a top speed of 21,000 mph and strikes from space.

The core concept of China’s ‘new’ weapon – deliver a warhead into orbit and have it circle the globe before hitting a target – was first developed by the Soviets in the 1960s.

Called a Fractional Orbital Bombardment System, or FOBS, it was developed to evade powerful US radar arrays and missile defence systems.

Those systems work by detecting launches of ICBMs – very long-range missiles that can be tipped with nukes – and tracking them into space, then firing at the warheads as they come down in the hope of blowing them up before they hit their targets.

This is possible because ICBMs and their warheads follow a predictable trajectory that rises high into space – making them relatively easy to spot and allowing defence crews to calculate where they are aimed so they can be shot out of the sky.

FOBS aim to negate these defences by firing their warheads along a much-flatter trajectory – assisted by Earth’s gravity.

This means they pass under the scope of many radar detection arrays and are harder to track. It also makes the warheads much harder to shoot down because their trajectory is harder to calculate.

The use of orbit makes a warhead’s range potentially unlimited, meaning it can be fired at its target from any direction. This helps to avoid radar systems which generally point at a fixed spot in the sky – in America’s case, over the North Pole.

Meanwhile, China  has also unveiled a hypersonic medium-range missile, the DF-17, in 2019, which can travel around 2,000 kilometres and can carry nuclear warheads.

In October, China deployed the DF 17 missile to coastal areas in preparation for a possible invasion of Taiwan.

It has been billed as ‘a death sentence’ to aircraft carriers within its range.

Hypersonic missiles travel at more than five times the speed of sound in the upper atmosphere – or about 6,200 km per hour (3,850 mph). This is slower than an intercontinental ballistic missile, but the shape of a hypersonic glide vehicle allows it to manoeuvre toward a target or away from defences.

Combining a glide vehicle with a missile that can launch it partially into orbit – a so-called fractional orbital bombardment system (FOBS) – could strip adversaries of reaction time and traditional defences mechanisms.

China on Monday insisted that the test in August was a routine one for a spacecraft rather than a missile.