A Perth teenager’s life support has been switched off following a horror crash in the city’s northern suburbs early Sunday morning.

Dominic Burns, 18, was in the front passenger seat of his friend’s Hyundai Accent as he and three friends made their way home from a night out around 4am.

A WA Police spokesman said the driver of the car appeared to lose control on Marmion Avenue in Mindarie when it left the wet road, hit several trees and then flipped.

The group had just dropped a friend home shortly before the crash.

Three of the four 18-year-olds were able to crawl out from the wreckage, however, Burns was trapped and unresponsive. All were transported to Royal Perth Hospital.

On Monday, the young electrician’s family made the devastating decision to turn off his life support.

In a statement, his sister Charlotte described their heartbreak.

“Dominic was so generous, he had the kindest heart. Never did we think something like this would happen to our little family.

“From a family of four, to three … we will never be complete without you.

“Dominic was so young and was taken from us, I promise we will continue to celebrate you. 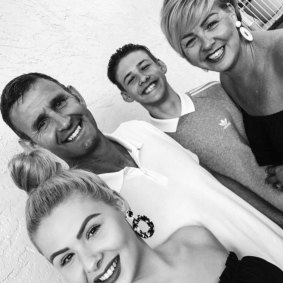 “You were such a special part of our lives and WILL continue to be. Rest In Peace Dominic James Burns – you are still are loved by so many. We love you more than you’ll ever know.”

Friends of the teens visited the scene on Sunday where tributes and flowers were laid.

Another friend said the four teens injured in the crash were “so close” and would be struggling to come to terms with what had happened.

They remained in a stable condition in hospital.

Anyone with information regarding this crash, or who saw the Hyundai Accent being driven prior to the crash, is asked to call Crime Stoppers on 1800 333 000 or report the information online at
www.crimestopperswa.com.au.