The construction watchdog has launched legal action against one of Australia's most influential unions over allegations it stopped critical work on the $6.7 billion West Gate Tunnel project.

The Australian Building and Construction Commission alleges the Construction Forestry Maritime Mining and Energy Union and two of its officials committed 46 breaches of workplace laws when they disrupted night work on the Andrews government's flagship project, which has been spruiked as a congestion-busting alternative to the West Gate Bridge. 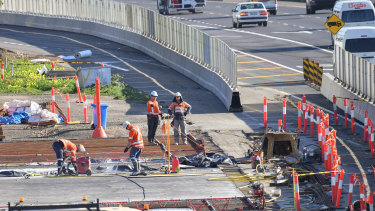 West Gate Tunnel works: over budget and behind scheduleCredit:Joe Armao

In documents filed in the Federal Court, the watchdog claims CFMMEU officials Paul Tzimas and Ron Buckley entered the worksite, climbed onto a scaffold deck in an exclusion zone and refused to leave, despite repeated requests from the project's management, a WorkSafe Inspector and police.

The incident took place over a six-hour period on the evening of December 3 as workers were set to install five, 16 tonne bridge beams using a temporary scaffolding deck. The West Gate Bridge had been closed to traffic to allow the work to take place.

"Employees identified that there were some quite serious issues with the scaffolding," she said.

"There were massive gaps. It wasn't safe, people could have fallen through."

But the ABCC said it was the union officials' presence that made the workplace unsafe for builders John Holland.

"By reason of their presence in the scaffold area, particularly on the scaffold deck … it was unsafe for John Holland to proceed with any beam lift and the scheduled works immediately ceased," the watchdog said in a statement.

It claims Mr Tzimas told the site superintendent that he was "going to stop the job" and he'd tell members there was "no f—ing chance of landing beams".

The legal stoush is among several that the ABCC has recently launched against the CFMMEU, with the watchdog also pursuing the union over claims an official stopped work on the Metro Tunnel because he thought a first aid bed was too high.

The West Gate Tunnel has been plagued with issues, including the disposal of 3 million tonnes of contaminated soil which has prompted legal action between Transurban and the project's builders.

Earlier this week, The Age revealed that the project was facing a $3 billion cost blowout, with one-third of the additional costs linked to problems moving underground pipes.

Internal documents reveal that the ambitious project has been delayed by 10 months.