When a child is hit by an airstrike or a landmine in a war zone, their bones bend more than those of an adult, so they are more likely to suffer long-term, incurable deformities.

They are thrown further and harder away from the site of the blast. They have less blood to lose so their injuries are more catastrophic. And if they make it to a hospital, their special needs as victims are less likely to find a surgeon capable of treating them in the stretched medical facilities in war-torn countries. 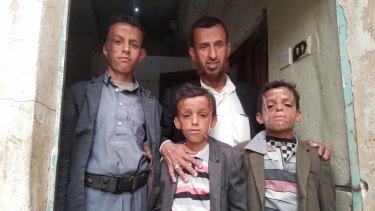 From left, Omar, 12, with his father Mohammed and brothers Ahmed, 10, and Abdul, 9, bear the scars of war. Credit:Save the Children

According to Save the Children, these factors lead to the "devastating toll" on children of war zones that last, in some cases, many years after the "hot" war has ended.

In conflicts in Yemen, Afghanistan, Iraq, Palestine and Nigeria, three in four child casualties are caused by explosive weapons, with children at heightened physical and emotional risk.

Naveed*, now 16, was eight years old when he stepped on a land mine while walking his family sheep in Afghanistan.

"The mines were from the Taliban times, we did not know about them," he says in a new Save the Children report, Blast Injuries.

"From that moment, I just remember that the mine killed my sheep, and that I lost my leg. I just remember those moments. Around 60 days I was in hospital under treatment, after that
I recovered a little." He received physiotherapy and a prosthetic leg. 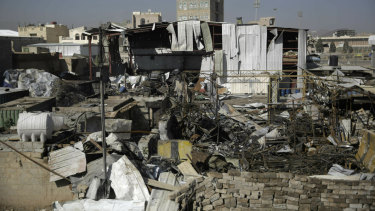 Other testimonies include Omar, a 12-year-old Yemeni boy, whose face became severely deformed after a bomb exploded outside his home.

"I was with my brothers in the kitchen. We were refuelling the Kerosene lamp at 8am then the blast hit," he said.

"During the war time, I wasn’t able to continue my education. My face was deformed and our house was destroyed. At the time of explosion, we only heard the sound of the bombing and we heard the screams of my brothers and sisters.

"Then the neighbours came and rescued us. The sound that I couldn’t forget is the sound of the bombs."

Omar's father says he and his two brothers have since been socially aggressive and withdrawn from the family's local circles.

The report cites research that says more than 2000 children have been killed or injured in the war in Yemen. It began in 2015 between a coalition of Saudi Arabia and other Arab states against the local Houthi rebels who had captured the capital Sanaa.

It builds on findings in a UN report released last year that stated more than 12,000 children were killed or maimed in armed conflicts worldwide in 2017.

That report blamed the US-backed Saudi coalition for at least half of the 1316 child deaths and 764 injuries recorded in Yemen, the poorest Arab nation. Children as young as 11 are fighting in the conflict. 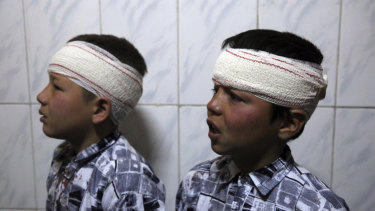 Two brothers wounded by an explosion are wrapped in gauze at a hospital in Kabul, Afghanistan, in March.Credit:AP

Save the Children Australia CEO Paul Ronalds said he believed cases such as Omar's and Naveed's would surprise many Australians.

"What we’re arguing here is every war is a war on children. The work we’ve been doing shows about one in five children are currently living in conflict zones around the world, and more children are being killed by war than actual soldiers," he said.

"Lots of Australians’ perceptions of war comes from a traditional view of war where it’s two armies facing off against one another, but most conflicts now are between state and non-state actors, in heavily populated urban areas, and we’re seeing much greater civilian casualties than ever before."

Ronalds called on the Australian and US governments to halt their ammunition supply to the United Arab Emirates and Saudi Arabia. A Saudi-backed air strike on a Yemen school bus last year killed 40 children, most younger than 10. The bomb used is believed to have supplied by the US.

Ronalds said the charity was also preparing a field handbook to help doctors and surgeons working with children injured by explosive weapons.

Michael von Bertele, former director general of the British Army Medical Services and one of the doctors who contributed to the report, said such accounts were necessary as children exposed to explosives faced unique complications.

"We know children's bodies are different. They aren't just small adults … when children suffer severe injuries to their legs and arms, it takes highly specialised knowledge to know where to amputate so that you can factor in future growth.

"Without that, children are left with even worse disabilities, and often intractable pain for life."