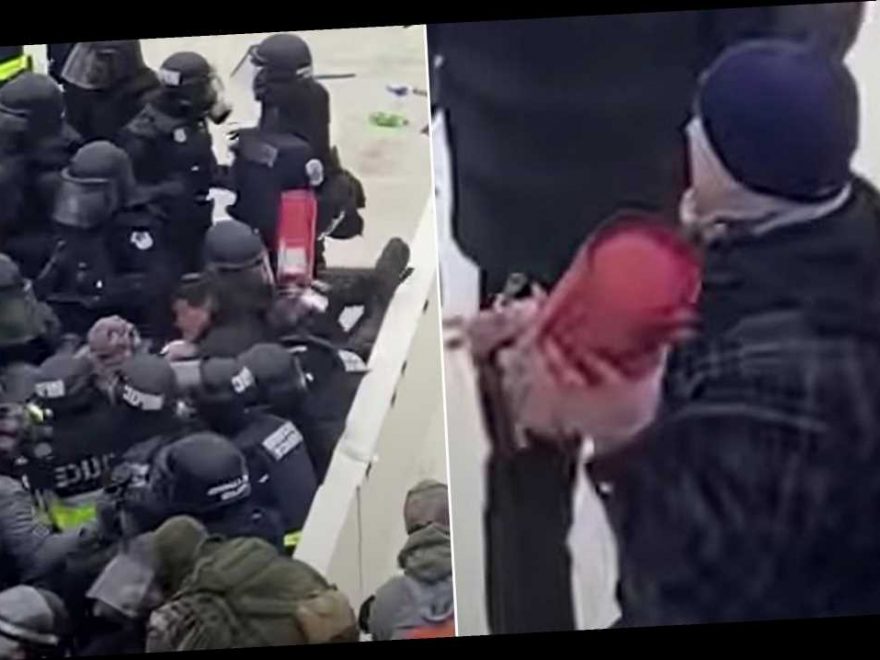 Zip-tie carrying vet arrested for Capitol riots was turned in by ex-wife: Feds

Dramatic new video shows the moment a US Capitol rioter hit an officer in the head with a fire extinguisher during Wednesday’s chaotic siege.

The footage obtained by Storyful from Wednesday’s siege shows droves of violent demonstrators storming past a barricade as US Capitol Police desperately tried to keep them corralled on the west side of the building at about 2:30 p.m.

“They broke through, it’s on!” one man is heard yelling as the chaotic clip begins.

Moments later, a rioter tossed the fire extinguisher toward a group of officers below, striking one on the helmet. It’s unclear if the cop who was plunked was Capitol Police Officer Brian Sicknick, 42. He died at a hospital Thursday after being hit in the head with a fire extinguisher during the melee, two law enforcement sources told the Associated Press.

An investigation into Sicknick’s death is ongoing, the sources said.

Four other people died during the dramatic siege, including a California woman shot by Capitol Police and three others who suffered medical emergencies.

The rioter who tossed the fire extinguisher appeared to walk away after heaving it at the helmeted officers from above — making an audible thud as it crashed to the ground.

At least one cop appeared to turn around to check out what happened, the footage shows.

Seconds later, someone heaved a bullhorn at the officers as the chants of “USA” continued.

“There’s a guy, like, dying over there,” another witness says on the clip. “They’re trying to hold him up.”

The startling footage also shows the rioters — including some carrying signs supporting President Trump and the Confederate flag – making their way up the Capitol steps and scaling its walls before later breaching the building.

At least 90 people as of early Monday had been arrested in Wednesday’s Capitol siege on charges ranging from misdemeanor curfew violations to felony assaults on police officers and making death threats against House Speaker Nancy Pelosi.