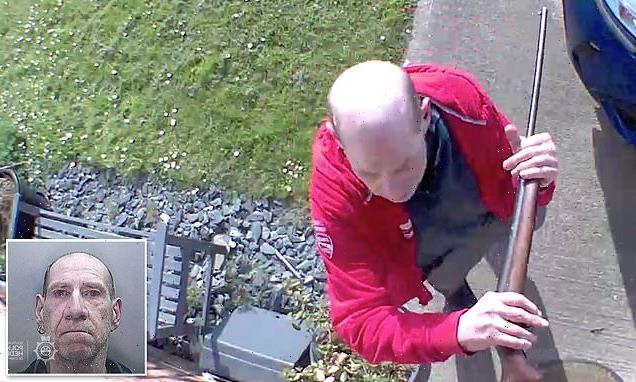 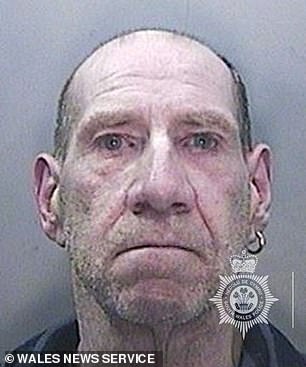 A gun-wielding man tried to force his way into his neighbour’s house after becoming ‘obsessed’ with the woman living there.

Terrifying footage shows Mark Townsend, 59, banging the butt of an air rifle against the door of the Cardiff home while shouting: ‘I’m coming in’.

Townsend, of Rumney, could be heard screaming: ‘Where have you gone, are you ok now? Don’t f****** come to the front door, I am coming through.’

His petrified victim, a grandmother, had endured weeks of harassment before Townsend armed himself with an air rifle in April and used it to bang on the door loudly.

He has pleaded guilty to possession of an imitation firearm and harassment with a view to causing serious harm and distress.

He was jailed for 13 months and handed a restraining order preventing him from going within 100 metres of the victim, for five years.

The pair had lived next door to each other for eight years before Townsend developed an ‘obsession’ with the grandmother, a court heard.

Prosecutor Roger Griffiths said that in one instance the woman woke to find Townsend knocking on her door in the early hours.

When she asked him what he was doing he replied in a creepy voice: ‘You know what I want’.

Another time Townsend knocked on her door at 5am and when she told him to go away as she had to go to work he replied: ‘I know what time you have to go to work.’

Cardiff Crown Court heard that following this incident – and weeks of Townsend’s harassment – she installed a camera above the door which could be accessed on her phone.

A month later she was again in bed when Townsend began banging loudly on her door and she called police.

But despite the warning, on April 29 Townsend armed himself with an air rifle and used it to bang on the door loudly.

Mr Griffith said the woman ‘thought if he got into her house she would be shot.’

He said: ‘She said she was absolutely terrified. It’s clear it caused serious distress to the victim in this case.’ 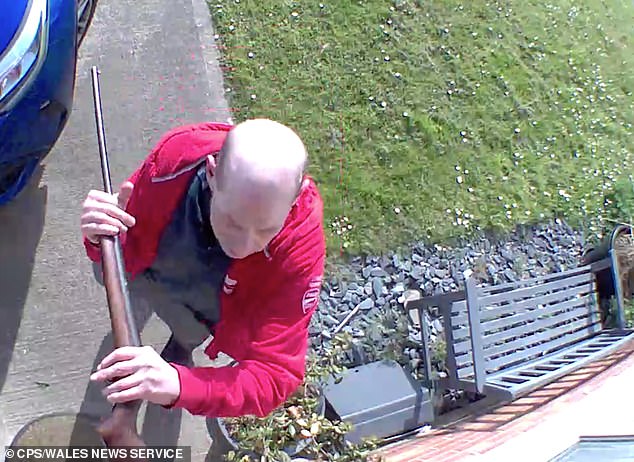 The footage shows how Mark Townsend, 59, banged the butt of the air rifle against the door of the Cardiff home while shouting: ‘I’m coming in’ 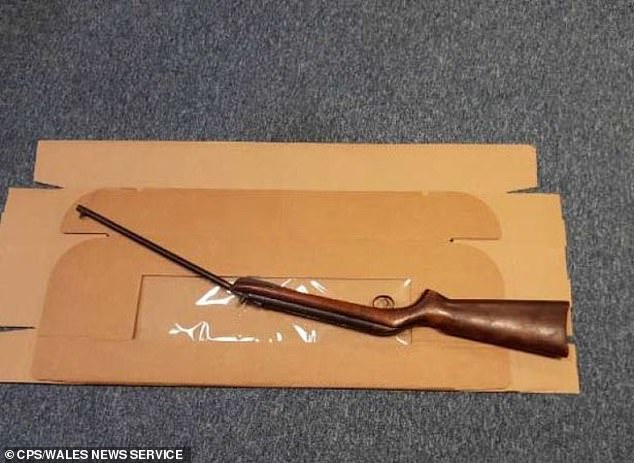 On April 29 Townsend armed himself with an air rifle and used it to bang on the door loudly. The weapon is pictured above 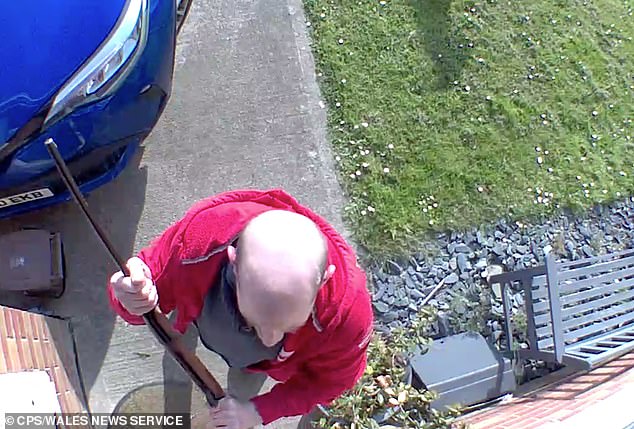 Townsend, of Rumney, could be heard shouting: ‘Where have you gone, are you ok now? Don’t f****** come to the front door, I am coming through’

Police were called and arrested Townsend with officers saying he was suffering a ‘mental episode’ at his home.

In a statement to the court, the woman said: ‘I need this man removed from the house next door on a permanent basis.

‘He is making my life hell and has some kind of weird obsession with me.

‘So many incidents have happened over the last few years, I cannot take it any more.

‘It’s having a detrimental effect on my mental health and was I tearful when the police turned up.

‘I am petrified about this man being released from custody and about what he will do to me. I cannot cope anymore and need help with this matter.’

Judge Catherine Richards said: ‘Taking the gun to the scene could only have been to intend and maximise fear and distress.’