Vice Presidential debates don’t usually generate too much excitement, but the health of Trump and Biden have put the added spotlight on their two potential successors.

While Trump appears to be recovering fairly well from COVID-19, the nature of the virus means he’s not out of the woods yet, and the tendency of the White House to cover things up makes it hard to know just how sick he really is. 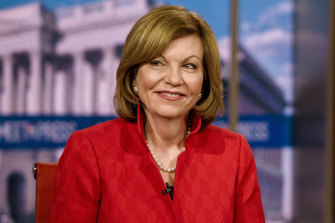 Moderator of the VP debate: Susan Page.Credit:William B. Plowman / NBC via LA Times

Page, 69, knows her stuff. As Stephen Battaglio from the Los Angeles Times writes:

"(Page) has covered six administrations and 11 national campaigns. She is the first print reporter to handle a televised presidential or vice presidential debate since 1976, when James Hoge, then-editor of the Chicago Sun-Times, moderated the matchup of VP contenders Walter Mondale and Robert Dole."

You can read the rest of his report here.

Debating in the time of corona

As I wrote earlier this week, the candidates at this week's US vice-presidential debate will be separated by a plastic barrier and be required to be 12 feet (3.6 metres) apart as safety measures are strengthened in the wake of President Donald Trump's coronavirus diagnosis.

Both Pence and Harris have tested negative to COVID-19, but fears about the spread of the virus – particularly among Trump's inner circle – have prompted a call by Democrats for extra precautions to mitigate against further outbreaks. 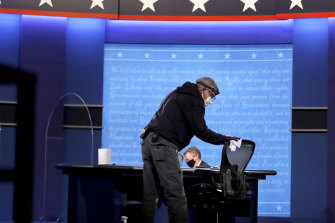 A staff member wipes down desks with disinfectant wipes on the debate stage.Credit:Bloomberg

The debate will take place in a mostly empty hall at the University of Utah. As with the presidential debates, there will be no traditional handshakes at the start or beginning of the event or the side-by-side photo opp.

Family and friends will also be forced to wear masks at all times – unlike the Trump family at last week’s presidential debate, who took off their masks once they were seated and refused staff requests to put them back on.

Welcome to the VP debate

Hi folks – welcome to the US vice presidential debate, which I'll be live-blogging over the next few hours.

It’s hard to believe that it’s only been eight days since Donald Trump and Joe Biden went head-to-head in what was probably the most unedifying political debate most of us have seen in quite some time.

Since then, the White House has become a COVID-19 cluster, Trump has contracted the virus, he’s been in and out of the hospital, his inner circle has been infected, COVID stimulus negotiations have been scrapped, and the stock market has tanked as a result.

Is anyone else exhausted yet?

The good news is, tonight’s debate between Vice President Mike Pence and Democratic VP nominee Kamala Harris is almost guaranteed to be far less chaotic than the Trump/Biden showdown of last week.

Nonetheless, it will be pretty interesting in the context of the past few days – we’re glad you can join us.