The head of the Victorian police union says officers are being called to incidents involving mental health every 10 minutes when they should be the "last people called to support the community in these situations".

Following several incidents in the past week involving police and individuals with mental illness, Wayne Gatt, secretary of the Police Association, said on Wednesday that the state was grappling with a "mental health crisis". 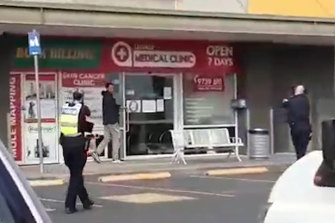 Police surround a man armed with a knife in Lilydale on Tuesday.

"We have a problem and Victoria Police sadly are the first line of responder we call. They should be the last people we call to support the community in these situations," he told Nine's Today Show.

"We would have police cars lined up at emergency departments sometimes five or six cars deep, taking mental health patients to hospital for assessment.

"They have to wait there for hours. It takes police off the road, it slows the system down. What it means is that almost around the clock our members are responding to mental health crisis, it shows the system is broken."

The state's misconduct watchdog has launched a criminal investigation into the violent arrest of a man in Epping after footage surfaced of him being rammed by a police car before an officer stomped on his head. 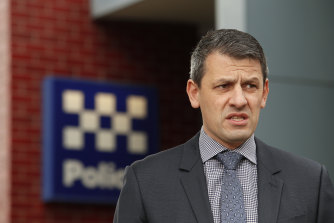 “If I had a scrapbook for every time police try to explain away bad behaviour with training, it’s a smokescreen and they know it.”

“There have been numerous coronial inquests into fatal shootings of people with mental illness. These lessons have been discussed and explored many times before,” he said.

“Police constantly turn to training or new modules they have brought out, but the facts are there have been no significant improvements. No amount of training will change this. It’s a systemic, cultural problem."

Tim Marsh, chief counsel at Victorian Legal Aid, said on Tuesday that the prevalence of emergency service workers being first responders at health emergencies was of "great concern".

He predicted the state's mental health royal commission would make findings to address the matter, and said more mental health specialists were required to respond to acute incidents.

"When patients are admitted to psych wards, the two most common acronyms are BIBA (brought in by ambulance) and BIBP (brought in by police)," he said, adding he was not casting judgment on the actions of police in any specific incident.

"It’s a really difficult situation for everybody involved."

The incidents at Epping and Lilydale are the latest in a rising number of violent interactions between police and the state's mentally ill.

In May, a 53-year-old Narre Warren father was gunned down on the Monash Freeway at Dandenong North after lunging at officers with a knife.

In July, Gabriel Messo was shot dead by police after attacking his mother in a Gladstone Park reserve.

Both men had a history of mental health concerns.