Lamborghini driver revving his engine at terrified pedestrians gets his £200,000 supercar seized by police when they learn he is not insured

A young motorist who harassed pedestrians by continually revving a £200,000 Lamborghini at them was left red-faced when it was seized by police.

Members of the public were forced to jump out of the way when the Huracan Evo supercar backfired as it drove through Bournemouth town centre in Dorset.

The driver also put the V10 motor into neutral and revved the 5.2l engine at passers by as they crossed the road. 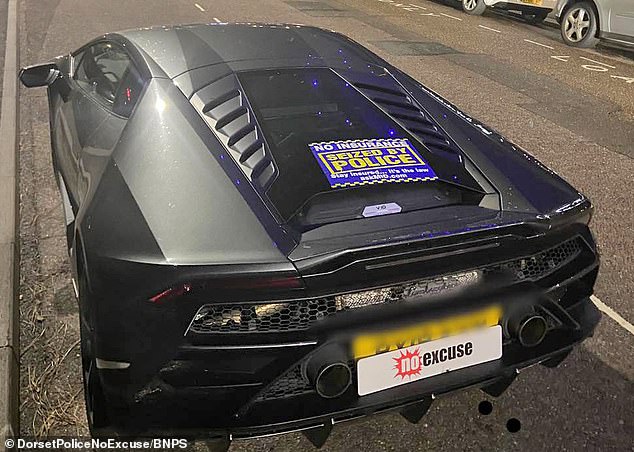 A young motorist who harassed pedestrians by continually revving a £200,000 Lamborghini at them was left red-faced when it was seized by police

The incident was enough to attract the attention of nearby police officers who pulled him over a short distance away.

He told traffic officers that he was moving the car on behalf of a friend and it soon emerged he was uninsured to be behind the wheel.

Police then issued him with a ticket for driving without consideration of others and having no insurance.

The 200mph Italian car was then taken away on the back of a truck.

A spokesman for Dorset Police’s No Excuse Team said: ‘It was drawn to our attention as the driver was at a pedestrian crossing revving the engine unnecessarily, very loudly as pedestrians crossed.

‘We caught up with the vehicle where it continued to rev its engine at pedestrians, drawing attention, at one point pedestrians jumped out the way due to the vehicle back firing. 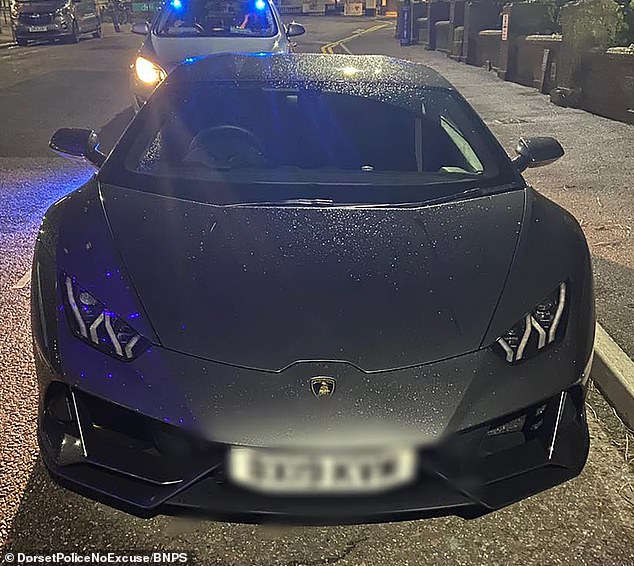 ‘We turned into Hinton Road where we were just putting in a stop when it accelerated excessively, finally coming to a stop.

‘The apologetic driver claimed he was moving the vehicle for a friend but it turned out he didn’t have any insurance to drive it.

‘We issued a ticket to court for driving without consideration of others, no insurance along with a section 59 notice.’

The Lamborghini produces 640bhp and can do 0-60mph in under three seconds.