UK records another 165 coronavirus deaths in hospitals taking total to 64,190

The UK has recorded a further 165 deaths in hospital settings with 159 in England, two in Scotland and four in Northern Ireland.

NHS Wales is not releasing figures today because of a ‘planned maintenance’, a statement on its website said.

Patients were aged between 47 and 97. All except five, aged between 55 and 89, had known underlying health conditions.

The deaths occurred between November 8 and December 12. Three other deaths were reported with no positive Covid-19 test result.

Later today, the Department of Health will release the number of deaths in all settings. 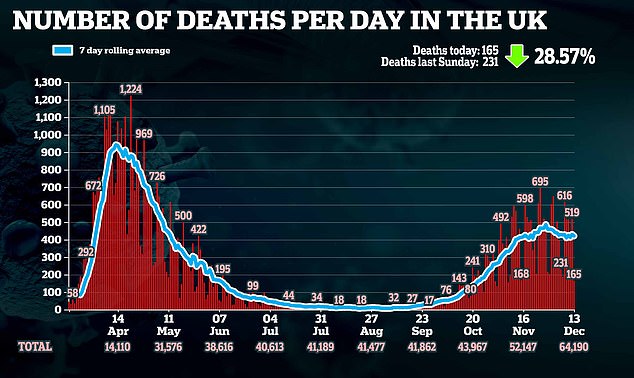 It comes as Boris Johnson urged families to ‘think hard’ about seeing loved ones at Christmas after NHS bosses warned that relaxing restrictions over the festive period could lead to cases spiraling out of control yet again.

Under the Government’s plans for a more normal Christmas, families will be allowed to form a ‘bubble’ with two other households between December 23 and 27 with no limits on the number of people.

Foreign Secretary Dominic Raab pledged this morning that the Christmas bubbles would go-ahead, adding that Britons deserved a five-day break after a ‘tough year’.

However, despite his assurances, the Prime Minister admitted in a virtual fund-raising event for Conservative party members that people needed to be cautious over the festive period.

In messages revealed today, he said: ‘My message to everybody is we do have this period of relaxation of measures at Christmas, but I really urge people to think hard about how you choose to enjoy that relaxation. I really would urge people to err on the side of caution rather than, I’m afraid, have a big blow-out with multiple households.

‘I know the rules say three households, but there is ample scope alas for further increases in this disease during tough winter months.’

It comes after scientists urged Britons to ‘rethink’ Christmas gatherings that are ‘not worth the risk’.

High streets were packed with eager Christmas shoppers yesterday as Covid-weary spenders gave Britain’s hard-hit businesses a £1.7billion boost ahead of the festive period. But top scientists have said families should avoid gatherings that could ‘risk infecting the vulnerable and elderly people we love’.

Sarah Gilbert, lead researcher on the Oxford Vaccine Development Programme, emphasised that behaviour over the festive period will have a ‘big impact’ on how long it will take to get back to normal.

She told the BBC’s Andrew Marr Show: ‘What we’ve seen in the US is that after Thanksgiving, when people were travelling and mixing, there’s now been a big surge in infections and they’re seeing 3,000 deaths a day now – the highest rate there’s ever been in any country.

‘If we have that kind of thing happening over the Christmas holidays in this country, with very high transmission rates then possible in January, it’s going to take so much longer to get things back to normal.

‘Because partly all the vaccination clinics will be disrupted. It’s not possible to run vaccination clinics when staff are off sick, and there’s a very high transmission rate affecting people’s ability to come to be vaccinated. So I think what we do over the next few weeks is really going to have a big impact on how long it’s going to take to get back to the normal.’