The UK has announced 697 more coronavirus deaths today, taking the total number of victims to 11,309 across all four countries.

It comes after Britain yesterday passed the grim milestone of 10,000 deaths, which has only happened in four other countries – the US, Spain, Italy and France.

NHS England said the victims in its hospitals were aged between 17 and 101 and 40 of them had no other health problems, the youngest 37 years old.

The death toll today is a drop on yesterday and the lowest figure since Monday last week, but a pattern has emerged of fatalities falling on Sundays and Mondays and then surging later in the week, so it should not be interpreted as a trend.

Scottish First Minister Nicola Sturgeon said there are ‘optimistic signs’ the coronavirus lockdown is working but restrictions will continue.

There are 211 people in intensive care with coronavirus or coronavirus symptoms, a decrease of 10 on Sunday, and 1,797 people are in hospital with confirmed or suspected Covid-19. 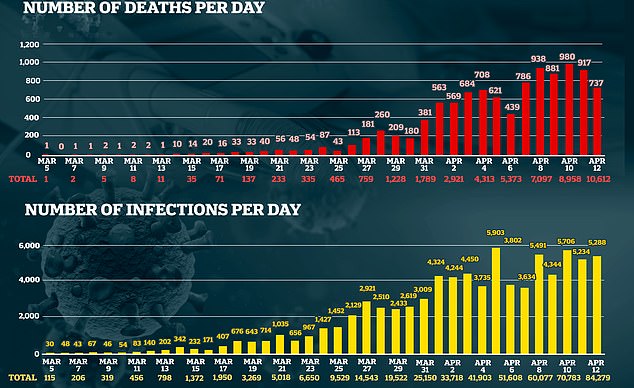 The First Minister said labs in the Tayside and Ayrshire and Arran health board areas have not reported testing figures from the last 24 hours and death figures are often lower after the weekend.

‘There are early optimistic signs that the steps we are taking are working but until we know more, until we have solid evidence, we must stick with it,’ she said.

A review of lockdown measures will take place this week but Ms Sturgeon said this is unlikely to lead to a lift in restrictions.

Amid concern over deaths in care homes, Ms Sturgeon said the Government is working with the Care Inspectorate to take action.

‘I want to give a very strong assurance firstly, that we’re working hard with the Care Inspectorate to provide appropriate support to care homes, their staff and their residents,’ she said.

‘Secondly, we’re working hard to ensure that we can publish full and robust information about numbers of cases in care homes, which we hope to do later this week.’

The First Minister also announced £17 million of a £50 million fund has been earmarked for charities supporting people through the crisis.

Some £10 million has been allocated for ‘immediate priorities’ and the other £7 million will be handed out in small grants to around 2,000 charities.

The remaining £33 million is open to bids from charities.

A helpline will also be launched on Tuesday to support people who are vulnerable but not in one of the shielded groups.

Interim chief medical officer Dr Gregor Smith urged families of those who have died during the outbreak not to delay funerals, in a bid to stop a backlog.

Dr Gregor Smith said: ‘The sector can cope, if everyone understands and appreciates the circumstances that we find ourselves in and continues to arrange a funeral for loved ones as normal, and I do stress, without delay.’

He added: ‘At this time, it’s very important that people do not delay funerals of their loved ones.

‘It’s important that people are able to grieve the passing of a loved one, but delaying the funeral in anticipation of social distancing measures being lifted could increase strain on funeral and mortuary services responding to coronavirus.’

Health Secretary Jeane Freeman said the NHS in Scotland has enough capacity to deal with the outbreak having trebled capacity to treat intensive care patients.

She said work is still being undertaken to increase capacity, with a target of quadrupling the initial capacity.