Two men have been seriously injured after a broad daylight attack at a shopping centre on the Mornington Peninsula.

Police said officers were called to Rosebud Plaza just after 10.15am on Saturday after they received reports of a man armed with a weapon.

Witnesses have told Nine News that the weapon was either an axe or a machete and that the man smashed car windows before going inside the shopping centre. 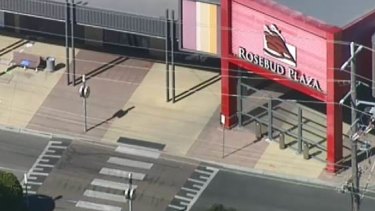 The scene at Rosebud Plaza after an attack on Saturday morning.Credit:Nine News

A man has been taken into custody. Police said there was no ongoing threat to public safety.

"It is believed two people have sustained serious injuries," a spokesperson said.

"The exact circumstances are unknown and the investigation is ongoing."

Ambulance Victoria said a man believed to be in his 40s was taken to The Alfred hospital in a serious condition after suffering upper body injuries.

Another man, believed to be in his 60s, was flown to The Alfred in a stable condition, also with an upper body injury.

In a separate incident, a teenager has died in hospital after he was stabbed in Corio last Sunday night.

The 18-year-old Bell Post Hill man was taken to hospital after an altercation between two groups of youths on Goulburn Avenue just after 6.30pm on August 23, police said.

A 16-year-old boy and an 18-year-old man were arrested nearby and charged with several offences, including intentionally cause serious injury, affray and commit indictable offence while on bail.

A third man, aged 19, was arrested on August 23 and has been charged with violent disorder, affray and commit indictable offence whilst on bail.

The matter is now being investigated by the homicide squad. The charges will be reviewed following the teenager's death.

The most important news, analysis and insights delivered to your inbox at the start and end of each day. Sign up to The Sydney Morning Herald’s newsletter here and The Age’s newsletter here.