Flashpoint Armenia: Turkey is accused of deploying F-16 fighter jets and 4,000 fighters to fight with Azerbaijan forces in growing war against Armenian separatists that has left 39 dead

A new proxy war is brewing in the Middle East today as Turkey flexed its muscles by backing Azerbaijan in a bitter dispute with Armenia amid heavy fighting which has left at least 39 people dead.

Armenian separatists claim they were attacked by Turkish mercenaries and F-16 fighter jets in the disputed Nagorno-Karabakh region, which belongs to Azerbaijan but is mainly inhabited by ethnic Armenians.

Separatist leader Arayik Harutyunyan accused Turkey of an ‘aggressive and expansionist policy’ in the region while Ankara vowed complete support for ‘our Azerbaijani brothers’ following some of the worst clashes in years.

While Azerbaijan and Turkey are close allies, sharing cultural and linguistic ties, relations between Turkey and Armenia are still scarred by the early 20th-century genocide in which which as many as 1.5million Armenians were deported and killed.

The proxy conflict could also draw in Russia, an ally of mainly Christian Armenia which has a military base in the country, and bring chaos to global oil and gas supplies which pass through pipelines in the South Caucasus region. 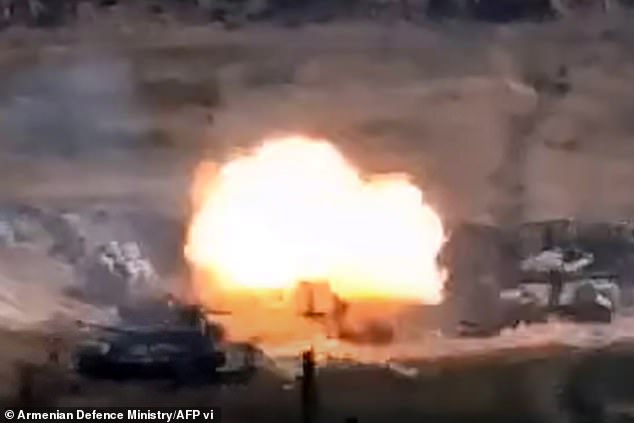 An image grab taken from a video made available on the official web site of the Armenian Defence Ministry on September 27, allegedly shows destroying of Azeri military vehicles during clashes between Armenian separatists and Azerbaijan in the breakaway region of Nagorno-Karabakh 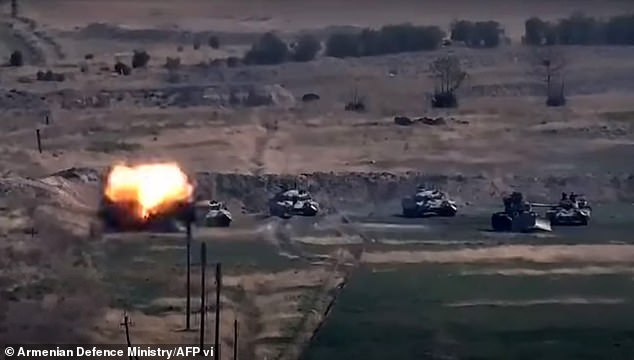 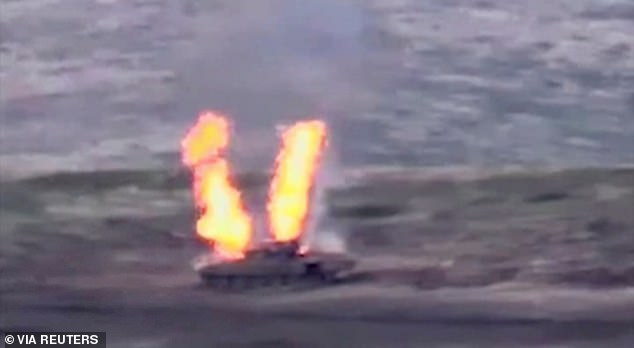 Armenia also claimed that two Azerbaijani helicopters were shot down and three Azerbaijani tanks were hit by artillery, but Azerbaijan’s defence ministry has rejected that claim 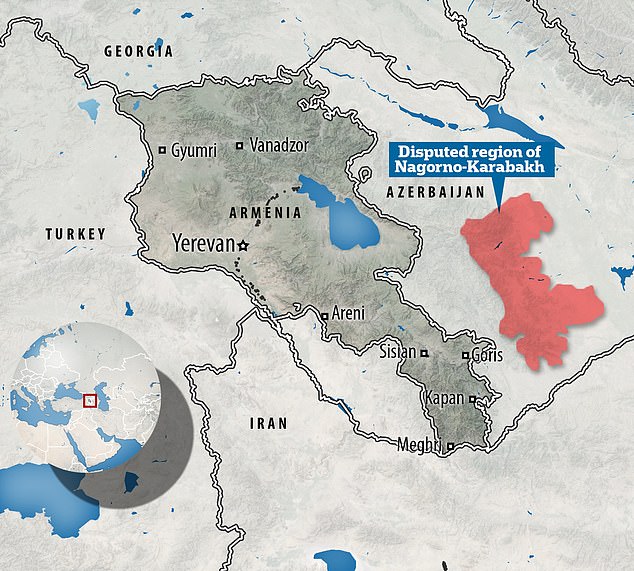 The disputed region is within the borders of Azerbaijan, but mainly inhabited by ethnic Armenians, and the crisis has been at a stalemate since the 1990s

As many as 1.5million Armenians were rounded up, deported and massacred by their Turkish rulers in the early-20th century massacre which still poisons relations between the two countries today.

The mainly Christian Armenians had clashed with the Muslim Turks as the Ottoman Empire slowly fell apart in the late 19th century, and matters came to a head during World War I.

The Ottoman Empire entered the war on the side of Germany and Austria-Hungary in 1914, and many Armenians were suspected of supporting the Russian enemy.

On April 24, 1915, thousands of Armenians suspected of harbouring nationalist views and being hostile to Ottoman rule were rounded up.

On May 26, a special law authorised deportations ‘for reasons of internal security’.

The Armenian population of Anatolia and Cilicia, labelled ‘the enemy within’, was forced into exile in the Mesopotamian desert.

A large number were killed on the way or in the detention camps.

Many were burned alive, drowned, poisoned or fell victim to disease, according to foreign diplomats and intelligence services at the time.

Others starved to death, or were shot or bayoneted by Ottoman Turkish soldiers.

Today, the countries have no formal diplomatic relations and Armenia calls the massacre the ‘first horrific genocide of the 20th century’.

Turkey fiercely rejects the term ‘genocide’, questioning the numbers involved and saying there were fatalities on both sides.

In 2014, Turkish leader Recep Tayyip Erdogan spoke of ‘shared pain’ over the killings, but last year he slammed France for officially commemorating the ‘genocide’.

Erdogan called on ‘the entire world to stand with Azerbaijan in their battle against invasion and cruelty.’

‘We defend our territory, our cause is right!’ Azerbaijan’s president, Ilham Aliyev, said in an address to the nation.

Armenia’s ambassador to Russia said that Turkey had sent around 4,000 fighters from northern Syria to Azerbaijan and that they were taking part in the fighting.

However, an aide to Aliyev called the allegation ‘another provocation by the Armenian side and complete nonsense’.

Armenia’s hostility to Turkey is rooted in the massacre of as many as 1.5million Armenians the Ottoman Empire during World War I.

More than 30 countries have recognised the killings as genocide, although Ankara fiercely disputes the term.

Ethnic Armenian separatists seized the Nagorny-Karabakh region from Baku in a 1990s war that claimed 30,000 lives, but the region’s independence is not officially recognised by any country – not even Armenia.

President Donald Trump said on Sunday that the United States would seek to end the violence.

‘We’re looking at it very strongly,’ he told a news briefing. ‘We have a lot of good relationships in that area. We’ll see if we can stop it.’

Democratic nominee Joe Biden urged the White House to push for more observers along the ceasefire line and accused Russia of ‘cynically providing arms to both sides.’

Russian president Vladimir Putin spoke by phone to Armenian prime minister Nikol Pashinyan, but no details of the conversation were available.

Russia has a military base in Armenia and considers it to be a strategic partner in the South Caucasus region, supplying the ex-Soviet country with weapons.

The Kremlin has cast itself as a mediator but Azerbaijan claimed last month that Moscow was ‘intensively arming Armenia’ after the earlier clashes in July.

‘Construction materials are usually not supplied in aeroplanes, there are other tools for that,’ an Azerbaijan official said after Russia said Il-76 strategic airlifters were merely carrying building materials.

The EU, the Organization for Security and Cooperation in Europe (OSCE) and Pope Francis have all called for both countries to stop their military actions.

Albanian prime minister Edi Rama, chairman of the OSCE, called on both sides to stop fighting.

The long-running and unsuccessful negotiations for resolving the territory’s status have been conducted under the auspices of the OSCE. 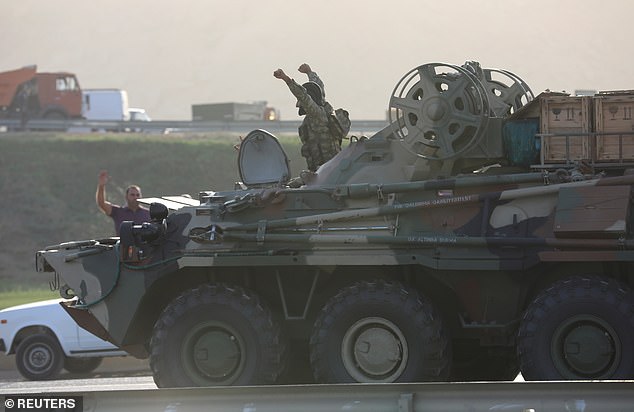 An Azerbaijani service member drives an armoured carrier and greets people, who gather on the roadside in Baku on Sunday 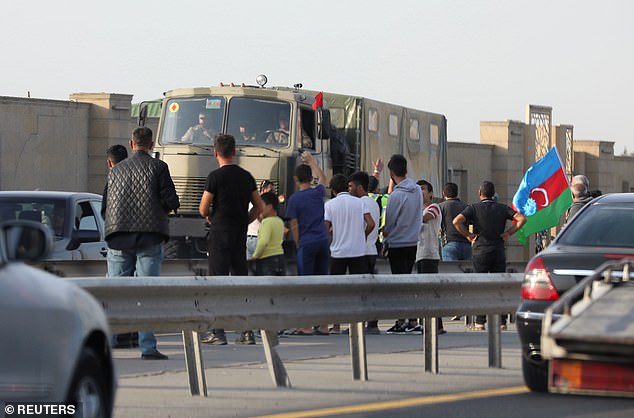 People line up along the roadside to greet Azerbaijani service members, who drive a truck in Baku 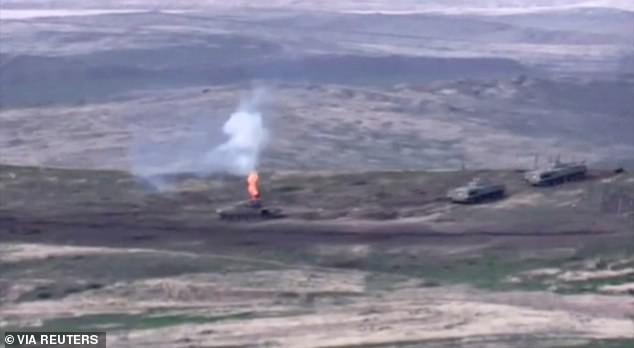 A still image from a video released by the Armenian Defence Ministry shows what is said to be Azerbaijani armoured vehicles, one of which is destroyed by Armenian armed forces 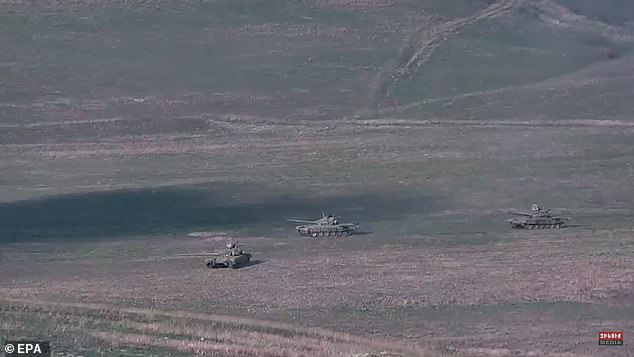 A frame grab from handout video provided by the Armenian Ministry of Defence allegedly shows Azerbaijani tanks at the frontline of the self-proclaimed Republic of Nagorno-Karabakh, between Armenia and Azerbaijan, above and below

How disputed region has caused decades of conflict

Tensions in the Nagorno-Karabakh region have caused one war, threatened to bring about others and killed thousands of people over more than 30 years.

Until 1991, the territory was in the Soviet Union and most decisions were made in Moscow.

But as the USSR fell apart, it became clear that Nagorno-Karabakh would come under Azerbaijani rule – which was unacceptable to the Armenian majority.

Sectarian conflict erupted, escalating into war in 1991 between Azerbaijan’s troops and Armenian forces. Thousands of people were killed and hundreds of thousands were displaced.

Nagorno-Karabakh declared independence that year but it was not widely recognised, leaving the ethnic Armenian administration in a state of legal limbo and under blockade from Azerbaijan’s government.

By 1994, when a ceasefire was agreed, ethnic Armenians controlled almost all of Nagorno-Karabakh, plus some surrounding Azeri districts that gave them a buffer zone and land bridge connecting their region to Armenia.

Azerbaijan vowed to take back control over the territory, using military force if necessary. The country is backed by its ethnic ally Turkey.

Deadly fighting broke out in 2016 and again earlier this year, raising fears of a new war and a proxy conflict drawing in Russia and other powers.

International efforts over the years to find a lasting peace settlement, involving France, the United States and Russia as mediators, have failed to clinch a deal.

Both ex-Soviet countries declared martial law after shelling which Azerbaijan claimed had killed as many as 550 separatist troops, although Armenia denied this.

The separatists said on Monday that 15 more of their fighters had been killed, bringing the total reported death toll from both sides to 39.

It was not immediately clear what sparked the fighting, the heaviest since clashes in July killed 16 people from both sides.

Seven civilian fatalities were reported earlier, including an Azerbaijani family of five and a woman and child on the Armenian side.

Azerbaijan has yet to announce military casualties but defence ministry spokeswoman Shushan Stepanyan claimed that ‘dozens of corpses of Azerbaijani soldiers’ lay on territory won back overnight.

She said heavy fighting continued on Monday morning and claimed Armenian forces had won back positions taken on Sunday by Azerbaijan.

But Baku claimed further advances, with the defence ministry asserting that ‘the enemy is retreating’.

Azerbaijani forces ‘are striking enemy positions using rocket artillery and aviation… and have taken several strategic positions around the village of Talysh’.

Sixteen people have been killed and more than 100 wounded after fighting erupted anew between Armenian and Azerbaijani forces on Sunday, according to officials.

Armenia also claimed that two Azerbaijani helicopters were shot down and three Azerbaijani tanks were hit by artillery, but Azerbaijan’s defence ministry denies this.

Hostilities this year have been the worst since 2016, when intense fighting killed dozens and threatened to escalate into all-out war.

Nagorno-Karabakh broke away from Azerbaijan in a conflict that broke out as the Soviet Union collapsed in 1991.

Although a ceasefire was agreed in 1994, after thousands of people were killed and many more displaced, Azerbaijan and Armenia frequently accuse each other of attacks around Nagorno-Karabakh and along the separate Azeri-Armenian frontier.

During the worst recent Karabakh clashes in April 2016, around 110 people were killed.

In July 2020, heavy clashes along the two countries’ shared border – hundreds of miles from Karabakh – claimed the lives of at least 17 soldiers from both sides.

France, Russia and the United States have mediated peace efforts as the ‘Minsk Group’ but the last big push for a peace deal collapsed in 2010. 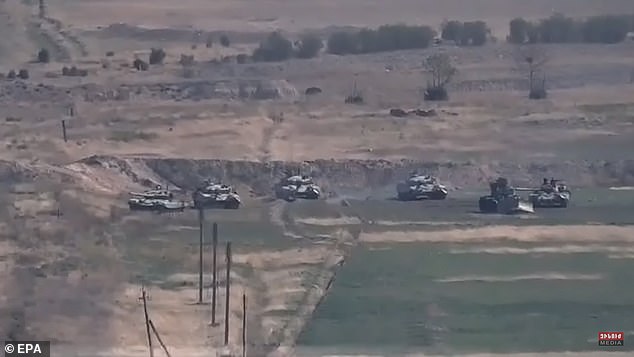 Artur Sarkisian, deputy head of the Nagorno-Karabakh army, said that 16 people were killed and more than 100 wounded 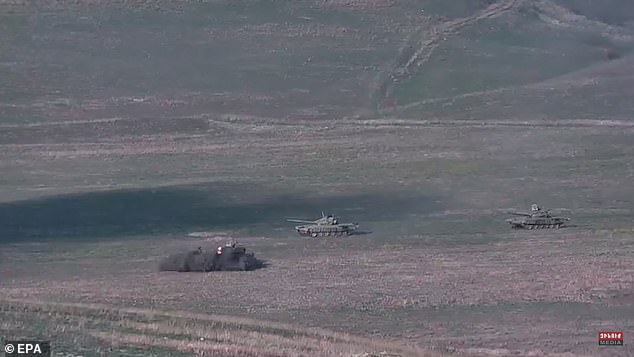 Earlier, the Armenian human rights ombudsman said a woman and child had been killed in the shelling 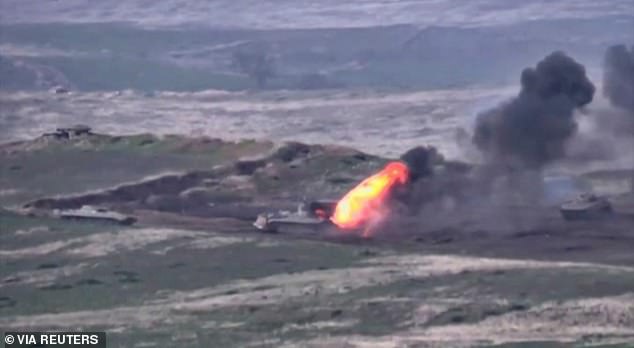 A still image from a video released by the Armenian Defence Ministry shows what is said to be Azerbaijani armoured vehicles, one of which is destroyed by Armenian armed forces in the breakaway region of Nagorno-Karabakh, in this still image from footage released September 27 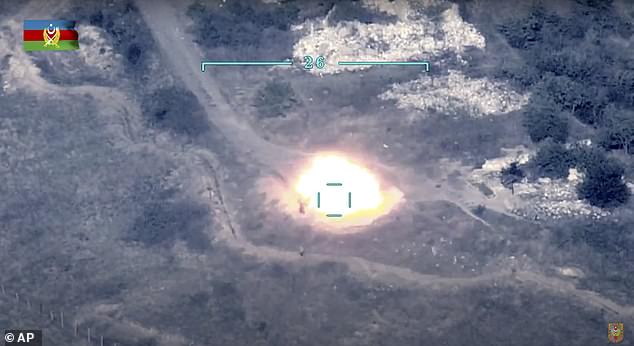 In this handout photo taken from a footage released by Azerbaijan’s Defense Ministry on Sunday, Azerbaijan’s forces destroy Armenian anti-aircraft system at the contact line of the self-proclaimed Republic of Nagorno-Karabakh 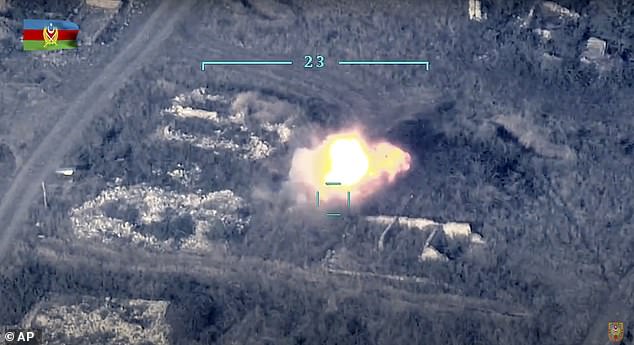