Washington: Donald Trump jnr's political allies launched an all-out war against the Republican-led Senate Intelligence Committee, turning several Republican senators on Thursday against the panel's chairman amid news that he had subpoenaed testimony from the president's son. 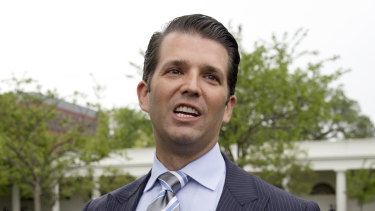 The broadsides included tweets targeting the Republican chairman, Senator Richard Burr of North Carolina, calls from people close to the president to at least one vulnerable Republican senator, and a Breitbart story aimed at senators including the majority leader, Senator Mitch McConnell of Kentucky, according to multiple people involved in the effort.

Even President Donald Trump got involved, telling reporters he was "pretty surprised" his son —"a very good person"— would be subpoenaed after Burr had said publicly he had found no evidence of collusion between the Trump campaign and Russia.

The main target of the pressure campaign appeared to be Senator Thom Tillis, a Republican, a close ally of Burr's who is facing a conservative primary challenger next year. Some of Trump's allies said they anticipated that the president would tweet support for Tillis' primary opponent if the senator did not speak out.

The pressure campaign is forcing the party's senators to choose between the Intelligence Committee and the president's family as it attempts to quash any remaining investigations of the president after the completion of the investigation by special counsel Robert Mueller.

Even as the chairman privately defended his approach, the attack appeared to be paying at least some dividends for the president's eldest son.

Tillis, who is not on the Intelligence Committee, wrote on Twitter that it was time for the committee to move on and that Trump had been "cleared." Later, in an interview, he echoed the president's statements.

Senator Rand Paul, called the subpoena "overkill," adding, "It is sort of malicious to bring the president's family in here and subject them to more interviews."

Trump jnr has faced persistent questions about his role in a Trump Tower meeting with the promise of Russian "dirt" on Hillary Clinton and in negotiations over a Trump Tower Moscow. But the subpoena appears to have been essentially routine. The committee is calling back key witnesses who spoke to staff members so senators can question them directly.