Donald Trump likened the Irish border with Northern Ireland to the United States’ troubled southern frontier with Mexico as he discussed Brexit at a meeting with Leo Varakar tonight.

The US president referred to the 310-mile boundary across the top of the island of Ireland as ‘your wall’ as they posed for cameras in Shannon after his three-day visit to Britain.

He promptly corrected himself and said that the dispute between the EU – including Ireland – and the UK over the Irish border was ‘going to work out very well’.

The so-called ‘backstop’ provision outlining customs arrangements for the border in the event of Brexit has proved to be the main sticking points and led to Theresa May’s failure to get the deal past MPs – causing her subsequent resignation.

Mr Trump told the Taoiseach: ‘Probably you’ll ask me about Brexit because I just left some very good people who are very involved with Brexit, as you know.

‘And I think it will all work out very well, and also for you with your wall, your border. I mean, we have a border situation in the United States, and you have one over here. But I hear it’s going to work out very well here.’ 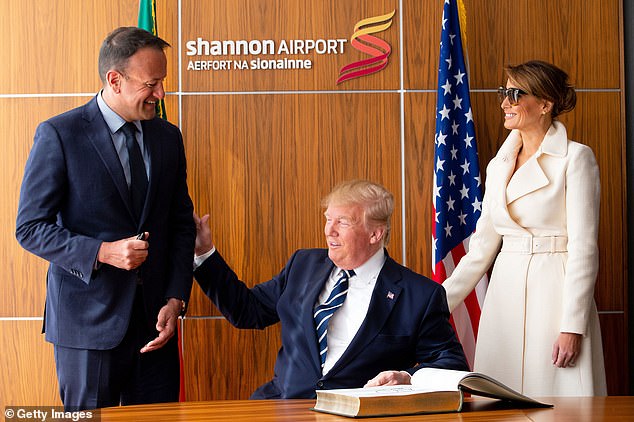 Prime Minister Leo Varadkar planned to use a meeting with Trump, who has been a vocal supporter of Brexit, to underline Ireland’s concerns over Brexit

Varadkar replied: ‘I think one thing we want to avoid, of course, is a wall or border between us.’

‘The way it works now is good, you want to try and to keep it that way.

I know that’s a big point of contention with respect to Brexit. I’m sure it’s going to work out very well. I know they’re focused very heavily on it.’

In answer to a question about whether Brexit would be bad for Ireland, Trump said, ‘I think it should be good. The big thing is going to be your border, and hopefully that’s going to work out, and I think it will work out.’

Prime Minister Leo Varadkar planned to use a meeting with Trump, who has been a vocal supporter of Brexit, to underline Ireland’s concerns over the departure, his deputy said.

How to keep EU-member Ireland’s border with Northern Ireland open after Brexit and ensure it does not jeopardise two decades of peace is proving the most intractable issue in Britain’s tortuous efforts to leave the EU.

Ireland’s deputy prime minister Simon Coveney told national broadcaster RTE : ‘I think the focus of the discussion between the taoiseach (prime minister) and President Trump today will be on the impact of Brexit on Ireland. This U.S. administration and previous ones have consistently been supportive of the Irish peace process.’

‘It’s a big deal when a U.S. president comes to Ireland. The relationship between Ireland and the U.S. remains strong, even though we disagree on many policy areas with the current administration,’ Coveney added, including Trump’s ‘blunt’ views in favour of Brexit among those areas.

Trump said in his remarks that the two countries had a great relationship, ‘as good as it’s been’.

Varadkar had opposed extending an invitation to Trump as a cabinet minister before changing his mind when he took over as prime minister in 2017.