Former Australians of the Year Grace Tame and Rosie Batty have opened up about the mental toll of being thrust into the national spotlight as advocates for abuse survivors, while cautioning feminists against tearing other women down and the over-use of inaccessible, jargon-heavy language.

In a joint event at the Sydney Opera House, Ms Tame, who has previously spoken publicly about her mental health struggles, revealed she had recently visited a hospital emergency room after feeling suicidal. 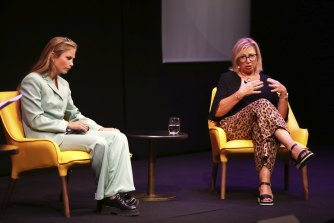 Grace Tame and Rosie Batty on stage in Sydney.Credit:James Alcock

“I was actually in the ER the other day because I actually lost control and I was really scared,” Tame told the All About Women festival on Sunday.

“I called up the clinic and I said, ‘I can’t, I can’t, I’ve stepped too deep into the shame spiral and I’m thinking about killing myself.’ That’s real and that’s the toll it takes. That’s the price of shame.”

Ms Tame said was “quite different” to Ms Batty, who earlier this year said Ms Tame’s strident criticism of Prime Minister Scott Morrison had sometimes made her feel uncomfortable.

“I think I’m a little bit rougher around the edges,” Ms Tame said, comparing herself to the 2015 Australian of the Year. “I’ve got a bit of a wicked sense of humour that gets me into trouble sometimes.”

Ms Tame, who was sexually abused by a teacher as a school child in Tasmania, told the crowd she was “eternally grateful” for being named Australian of the Year but added: “I didn’t ask for this.”

“Rewind the clock to last year, the 25th of January: I was living in a housing commission area, I was an unemployed person when I was named Australian of the Year,” she said.

Ms Tame said she had received some “justified criticism” over the past year, including during the past week for fronting a campaign with other prominent women that called for gender equality to be a central issue in the federal election campaign.

Some critics said the campaign was exclusionary because so many of the featured women were white.

“We have to make space and try to platform those people who are underrepresented and unheard,” Ms Tame said, adding: “If we’re focussing too much on the negative I don’t think we’re going to get very far and I do worry about that divide and conquer.

“There are certain people who are looking back, watching people tear each other down and go round in circles and they’re just benefiting from it and those are the perpetrators.”

Ms Tame said that “because there’s all this inaccessible language in this sector we have to ask ourselves about what really is inclusive”.

“I didn’t go to university, I didn’t do gender studies,” she said.

Ms Batty recalled almost being killed when getting out of a taxi in Sydney and a passing bus taking the car’s door off its hinges.

“I sat there and thought, Am I relieved I’m alive or am I disappointed I’m still here?” she said. “I sat there and I realised, ‘I want to live, I have to live’. That bastard who took Luke cannot ruin my life.”

Ms Batty said that she threw herself into her work as Australian of the Year in part to distract herself from the dealing with the grief of her son’s death.

“I was manic, I was not an easy person to be around,” she said. “Trauma is a beast.”