London: Britain is facing its longest recession on record, the Bank of England warned on Thursday, as it delivered its biggest interest rate rise in more than three decades to fight a surge in inflation from soaring energy prices.

The central bank board voted to lift interest rates by 0.75 percentage points to 3 per cent, in its most forceful act to tame the now double-digit inflation since 1989. Higher borrowing costs will likely hurt an already weak economy as consumers brace for a difficult winter of falling real incomes and rising household costs. 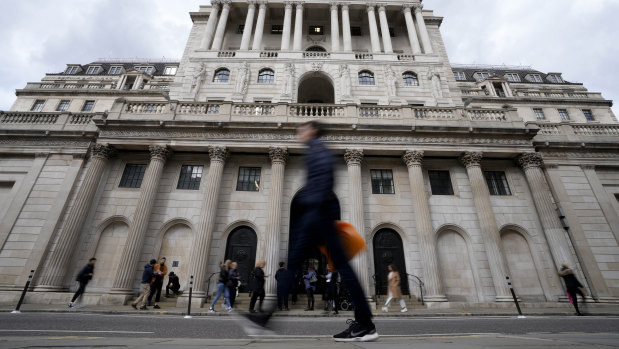 The Bank of England has raised interest rates to 3 per cent, in its most forceful act to tame inflation for 30 years.Credit:AP

The world’s leading economies continue to face steep challenges, with countries that account for about one-third of global gross domestic product poised to contract this year or next, shaped by the Russian invasion of Ukraine and a cost-of-living crisis caused by persistent and broadening inflation pressures, and the slowdown in China.

Bank of England governor Andrew Bailey said the UK economy likely entered a recession in the three months through September, when output fell an estimated 0.5 per cent. He warned it would last until mid-2024 with inflation, as measured by the consumer prices index, expected to peak at 11 per cent this winter before falling next year.

Unemployment would rise steadily to 6.4 per cent by late 2025, nearly doubling from a current 3.5 per cent, its lowest rate since the mid-1970s, the bank warned.

Bailey said the Bank had no other option to implement an eighth consecutive hike in the base rate because inflation is too high.

“It is a tough road ahead,” he told reporters. “The sharp rise in energy prices has made us poorer as a nation… If we do not act forcefully now it will be worse later on.”

The pound fell sharply and was down about 2 per cent against the US dollar, touching its lowest since mid-October when Britain was in a political crisis triggered by former prime minister Liz Truss’ tax-cutting plans.

Officials forecast it will be the longest recession since the World War I but not be as deep as the downturn that followed the financial crisis of 2008. The recession is expected to knock 2.9 per cent off the size of the economy, which is less than half of the 6.3 per cent decline in output that followed the GFC.

While Bailey said the outlook was “very challenging” he said interest rates would not need to rise much further to bring inflation back to its 2 per cent target.

“We can make no promises about future interest rates,” he said. “But based on where we stand today, we think [rates] will have to go up by less than currently priced into financial markets. That is important because, for instance, it means that the rates on new fixed-term mortgages should not need to rise as they have done.”

New data also confirmed the annual consumer inflation in the Organisation for Economic Cooperation and Development (OECD) area rose to 10.5 per cent in September, the highest in more than 34 years.

The figure was up from 10.3 per cent in August, reaching its highest level since May 1988, according to a statement released by the Paris-based organisation.

Half of the OECD countries posted double-digit inflation rates in September, with the highest rates seen in Estonia, Hungary, Latvia, Lithuania and Turkey (all above 20 per cent). Food and energy prices inflation continued to be the main contributors to headline inflation in France, Germany, Italy and Japan.

The annual core inflation – excluding food and energy – also continued rising in the month to hit 7.6 per cent.

The Bank of England’s policy decision follows a period of economic and political turmoil which was triggered by tens of billions of unfunded tax cuts and energy subsidies announced by Truss and former chancellor Kwasi Kwarteng, who lasted just 38 days in the job, in September.

The absence of a plan to reduce government borrowing over the medium term spooked investors, leading to a collapse in government-bond prices and the departure of Truss a month later. The Bank of England bought government bonds to prevent a market meltdown.