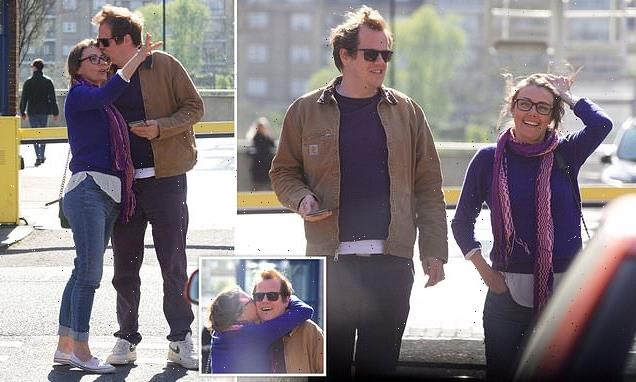 EXCLUSIVE: Tom Parker Bowles learns to smile again: Camilla’s son shares a giggle with a female friend in the Spring sunshine following the tragic death of his girlfriend to cancer

Tom Parker Bowles steps out in the Spring sunshine and shows he’s learning to smile again after the tragic death of his girlfriend from cancer.

The award-winning food writer and author was spotted sharing a meal with a female friend in London and the pair enjoyed the warm weather outside the exclusive River Café in west London.

Tom, 46, and his companion laughed and joked as she gave him a playful bear hug and pecked him on the cheek after leaving the eaterie by the Thames in Hammersmith.

Tom was left devastated earlier this year after his girlfriend of two years, the diarist Alice Procope passed away.

She was the granddaughter of the 2nd Viscount Ingleby and had three young children with her estranged husband, Robert Procope, grandson of baronet Sir Robert Wigram.

A friend told the Daily Mail that Mr Parker Bowles had been ‘blissfully happy’ in his relationship with Ms Procope, after splitting from his wife of 13 years Sarah Buys, an editor at Town & Country magazine. 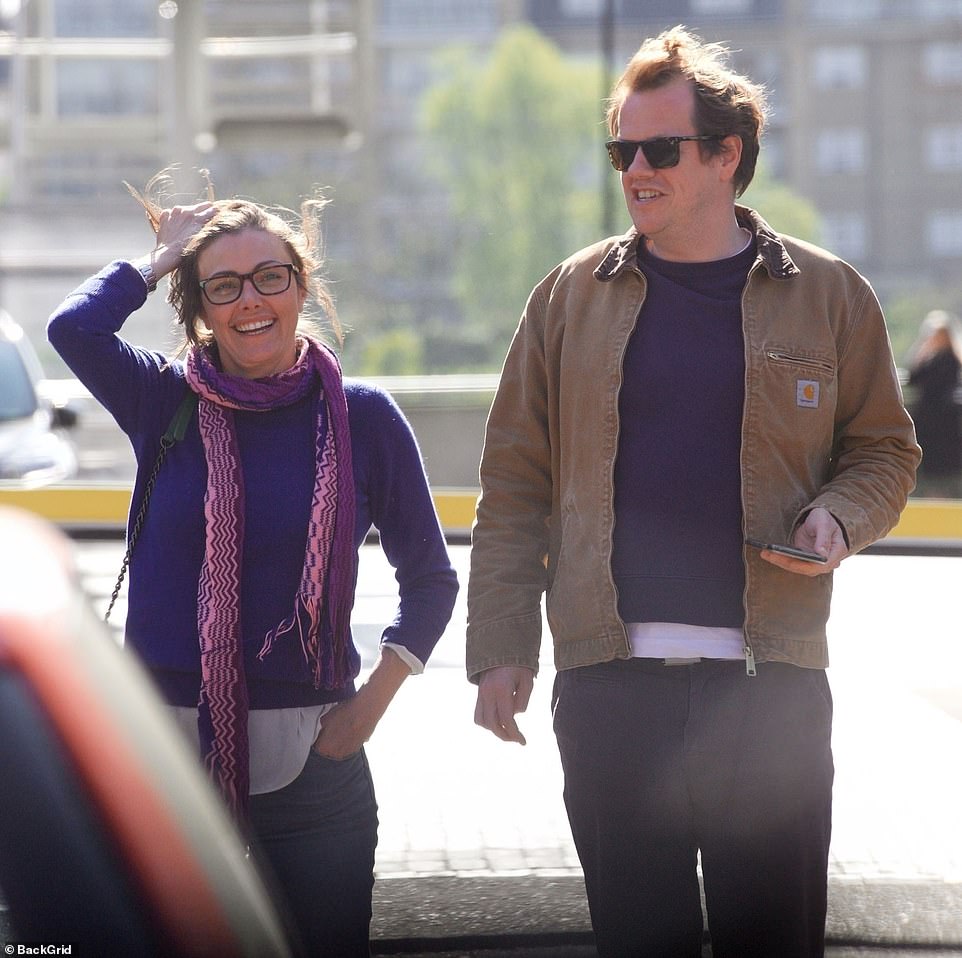 Tom Parker Bowles, 46, sports a pair of sunglasses as he walks alongside his female friend, who is seen brushing back her hair with one hand casually in her pocket, outside the exclusive River Café by the Thames in Hammersmith, west London 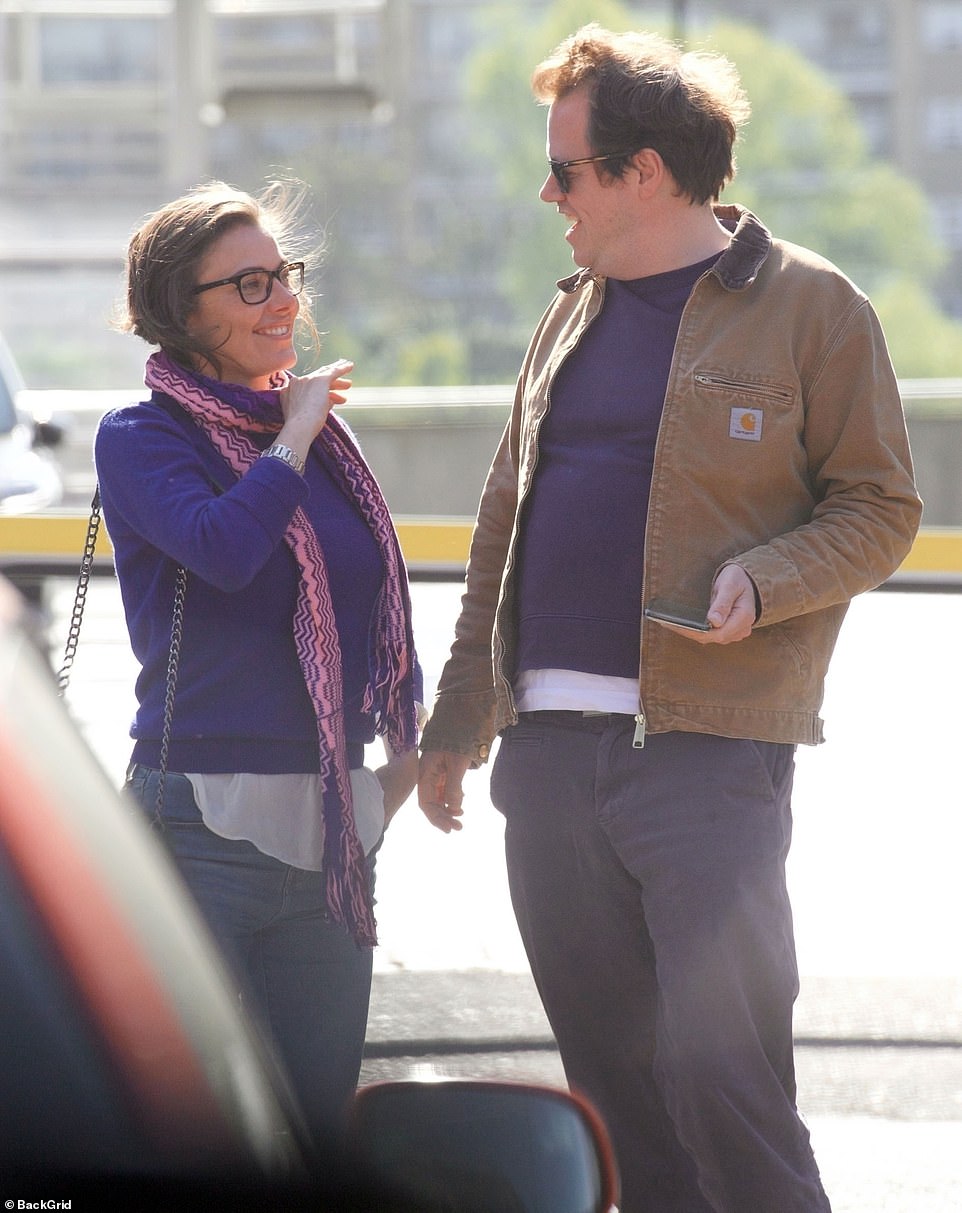 The pair smile as they turn and look towards each other while enjoying the warm weather. Tom is seen dressed in a brown zip-up jacket, navy trousers and a matching jumper while his companion wears a patterned scarf and a purple pullover 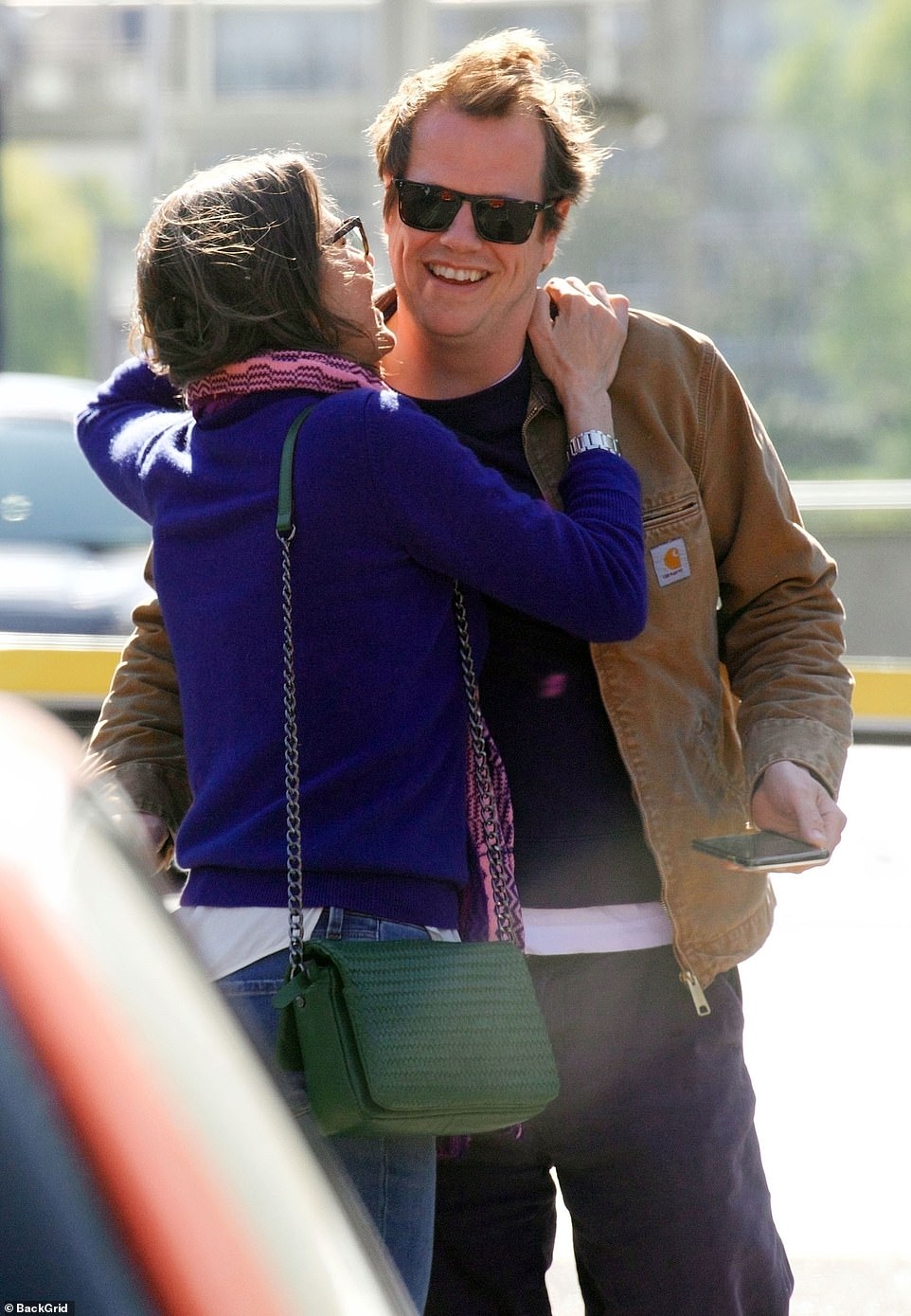 Father-of-two Tom seemed to be putting the sadness of the past few months in which his girlfriend tragically died from cancer, behind him with a day out in the Spring sunshine 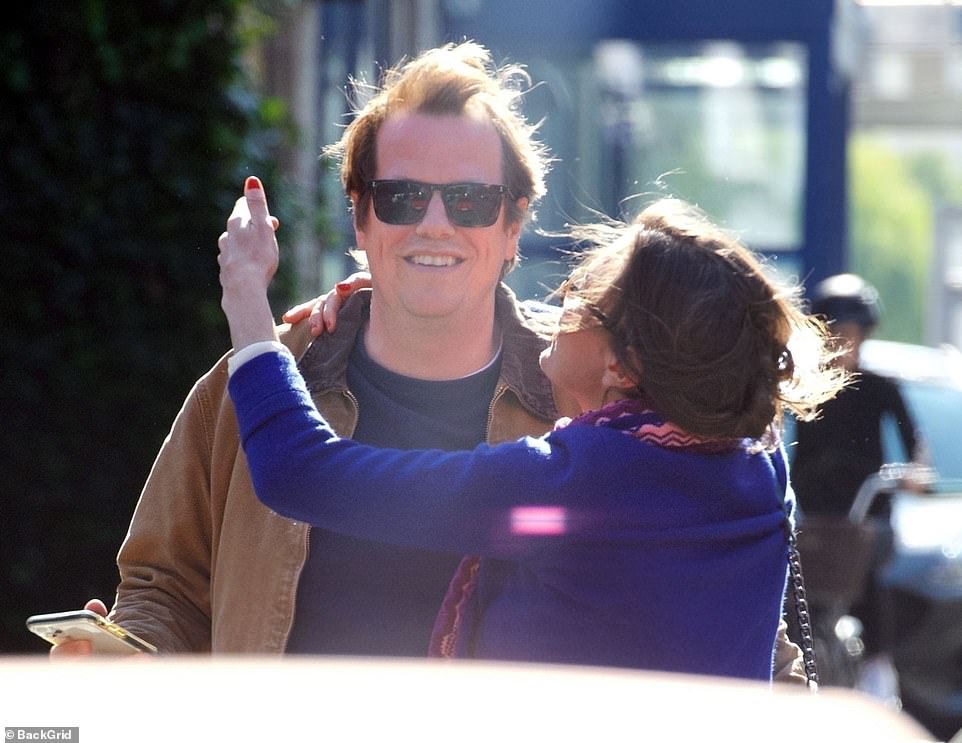 The award-winning food writer and author smiles while looking towards the camera and holding his phone in one hand. His female friend puts on an animated display, waving one hand in the air while placing the other around his shoulder

The stepson of Prince Charles (right) was devastated by the death of girlfriend and former journalist Alice Procope (left), 42, who was known as Alice Horton while working as a diary reporter, last month, after the couple had been together two years

They said he was devastated ‘that life can be so cruel.’

Ms Procope was known as Alice Horton while working as a diary reporter for the Evening Standard.

The friend added: ‘Partly because of Covid, Alice’s cancer diagnosis didn’t come until last August by when it was too late.

‘That’s what’s so really cruel and there will be countless others like her.’

Alice’s death came as thousands of Brits are thought to have missed out on crucial appointments, amid fears of delayed diagnoses around the country.

Clearly trying to put a difficult few months behind him, the Duchess of Cornwall’s son seemed to be enjoying the sunny weather at the weekend as the capital’s lockdown began to ease.

The father-of-two raised a smile as his chuckling companion, full of the joys of spring, larked around.

Both casually dressed in jeans, and sweaters, with Tom in trainers and wearing sunglasses against the afternoon glare, while his friend had white pumps.

Princess Beatrice and her husband Edoardo Mapelli Mozzi were also spotted at the restaurant on the same day, Saturday, enjoying lunch on the terrace with friends, but it is not known whether Tom and his pal were part of the same group. 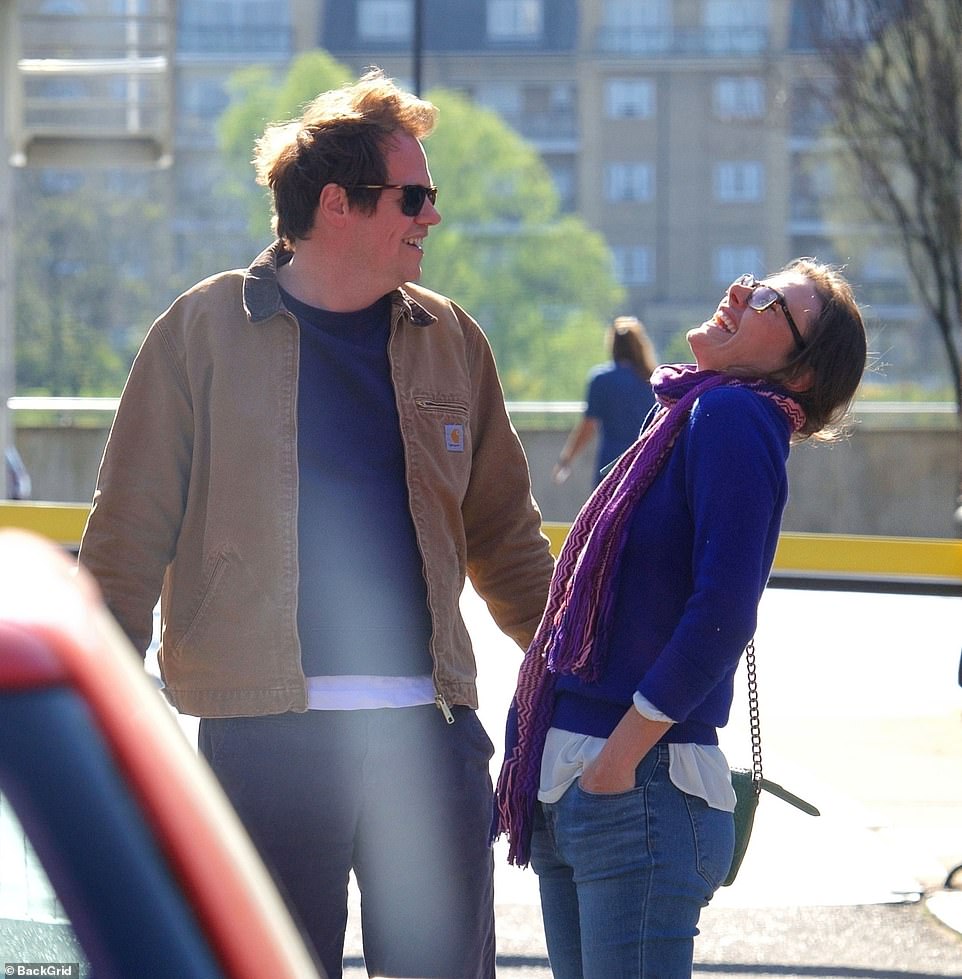 Tom smiles on as he female friend throws back her head in laughter after sharing a meal in west London, following the easing of Covid restrictions across England on April 12 with outdoor dining and drinking now permitted 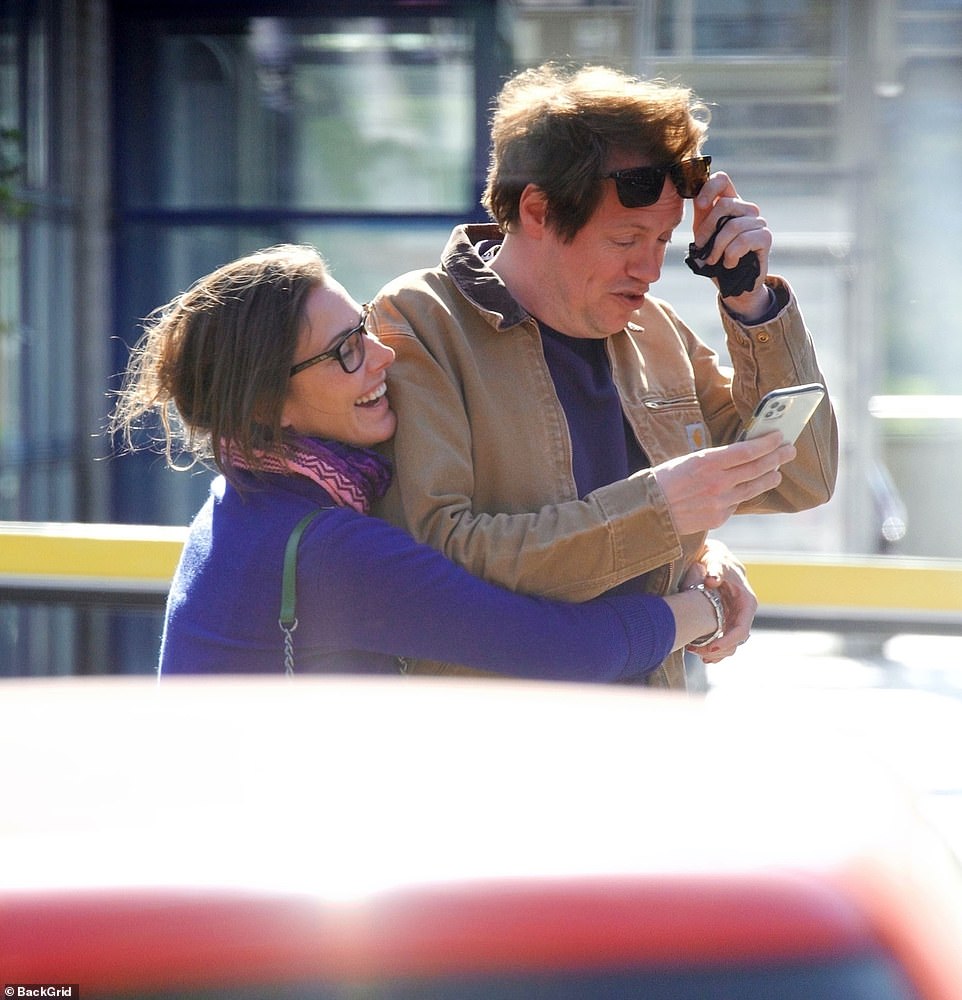 Tom pushes up his sunglasses to check his phone while his companion laughs gives him a bear hug. The father-of-two has written five cookbooks and won an award for his writings on British food in 2010 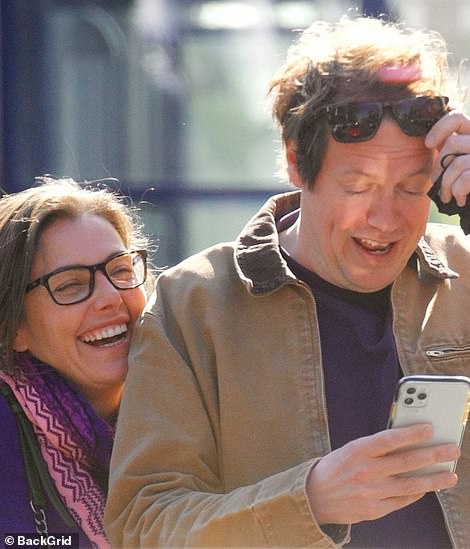 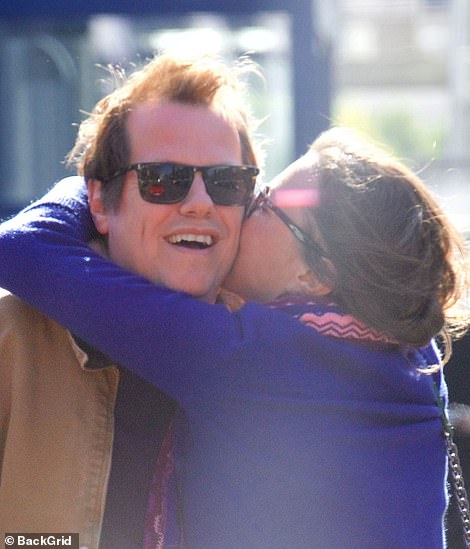 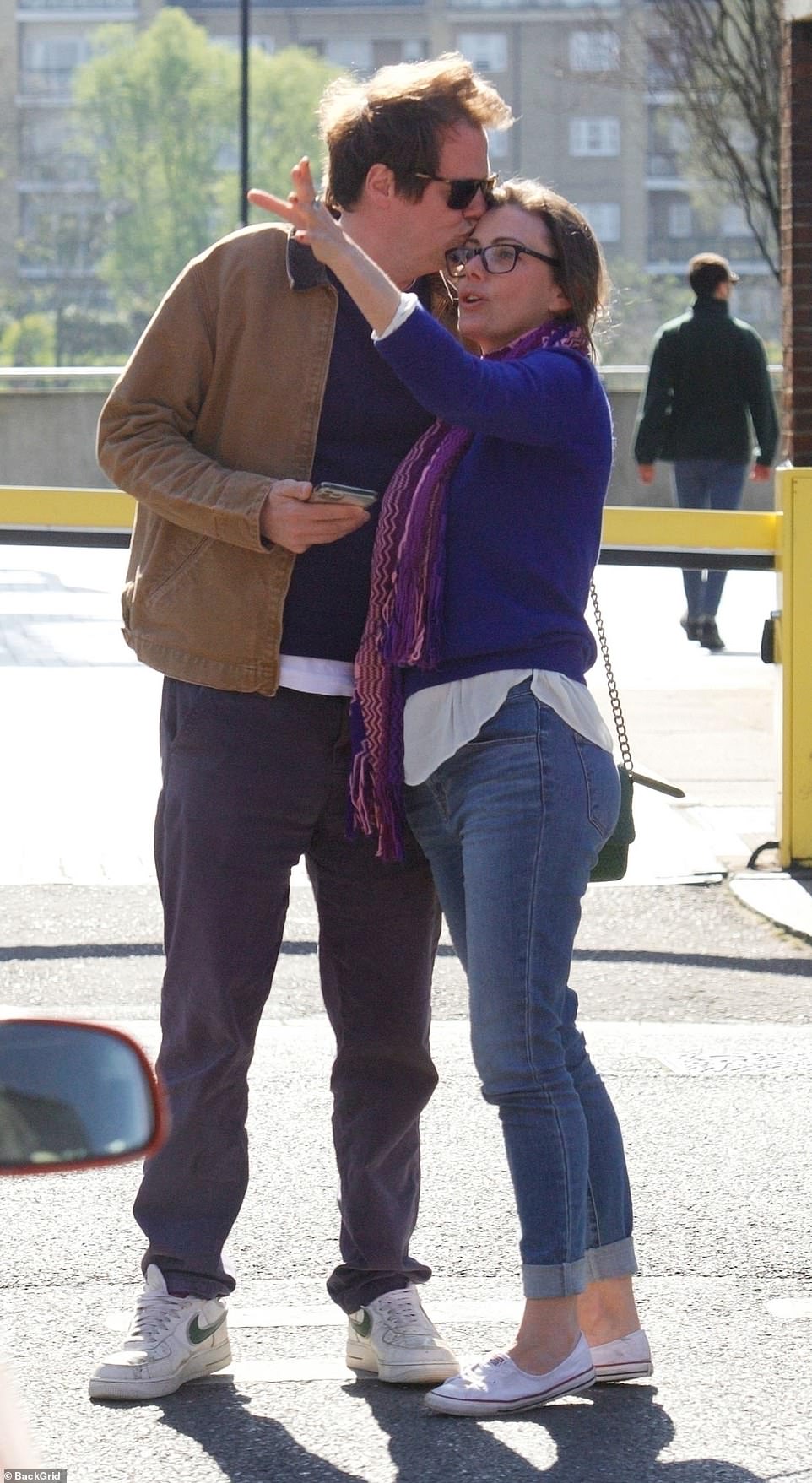 The food critic pecks his companion’s forehead in return and she looks into the distance, apparently speaking to Tom about the architecture of the building she is pointing towards, with a large ring seen on her middle finger

Tom, who separated from Sara in 2018, is close to Prince Charles, with the future King admiring the way his stepson handled his relationship with Camilla.

The acclaimed author has written five cookbooks and won an award for his writings on British food in 2010.

His father is Andrew Parker Bowles and he has a younger sister, Laura Lopes, an art curator.

He has also presented a number of food shows and makes regular appearances on MasterChef as a critic.

Earlier this week, Tom revealed his mother Camilla is a fan of the ITV’s Loose Women as he appeared on the show to promote his new Fortnum & Mason book about tea.

But he claimed that neither he nor her watch Netflix drama The Crown.

Tom said he’d forgotten to warn his mother about his appearance on the daytime talk show, but that he wasn’t too concerned because he ‘knows what she likes’.

Speaking of a chat with one of the show’s producers, he said: ‘She said ‘Have you rang your mum to ask her?’ And I thought, ‘Oh gosh I’ve forgotten’. But I know what she likes.’

Confirming that his mother is a fan of the show, he explained: ‘I can’t remember which one of you she told but she doesn’t lie about that sort of stuff, so she said it, it’s true, she does.

Asked if Camilla is a regular viewer, he said: ‘When she’s working she can’t nip off and watch Loose Women but when she’s not, most definitely.’

Tom was appearing to promote his new book for Fortnum & Mason, Time for Tea, which provides an expert guide to all the different teas in the high-end department store.

When asked what Camilla would typically drink he said: ‘I don’t think she drinks so much tea anymore, but it would be I’d say English Breakfast, but with a slice of lemon and not milk.’

When quizzed on whether his mum watched Netflix royal drama The Crown, the food critic cheerfully answered: ‘I can answer truthfully, no and no!’.

The latest season of the royal drama, which premiered last November, shows Charles meeting and marrying an innocent Diana while maintaining his affair with the then-married Camilla.