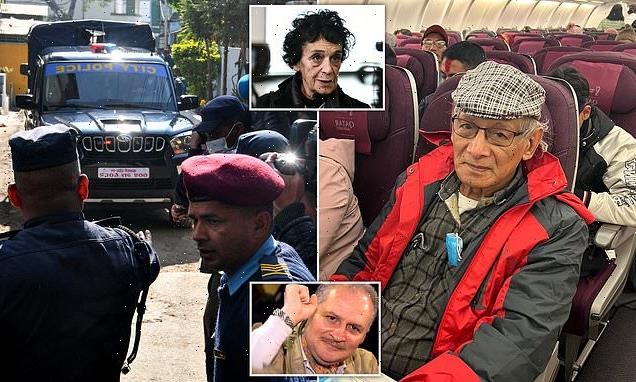 The Serpent meets fiancé of The Jackal: Serial killer met by partner of Venezuelan terrorist ‘Carlos the Jackal’ in Paris as he returns from serving 20 years in Nepalese jail for gruesome backpack murders that inspired BBC drama

A notorious French serial killer dubbed ‘The Serpent’ in a BBC TV drama that made him infamous around the world arrived home in Paris today to be greeted by the lawyer fiancée of ‘Carlos the Jackal’.

Charles Sobhraj, 78, touched down in the capital city’s Charles de Gaulle airport at 7am on Saturday morning after being released from a prison in Nepal where he served 19 years for his murderous crimes.

Meeting him in Paris was barrister Isabelle Coutant-Peyre, the girlfriend of ‘Carlos the Jackal’ – the Venezuelan terrorist Ilich Ramírez Sánchez, who is serving multiple life sentences in a high-security prison in eastern France.

Ms Coutant-Peyre believes that both ‘The Serpent’ and ‘The Jackal’ are innocent of any crime, and has now pledged to clear both their names. 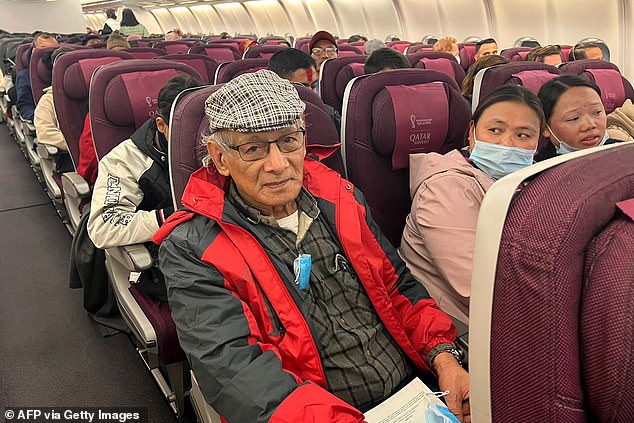 A notorious French serial killer dubbed ‘The Serpent’ in a BBC TV drama that made him infamous around the world arrived home in Paris today. Pictured onboard the flight from Kathmandu to France on December 23 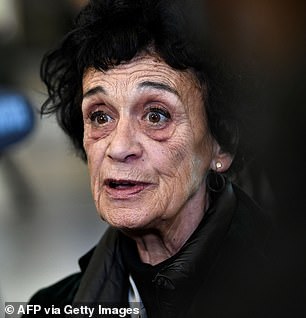 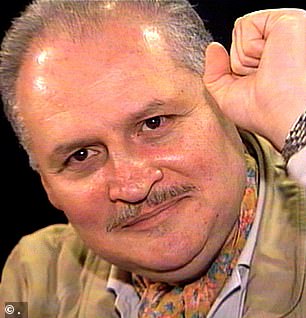 Meeting him in Paris was barrister Isabelle Coutant-Peyre (left, at the airport today), the girlfriend of ‘Carlos the Jackal’ – the Venezuelan terrorist Ilich Ramírez Sánchez (right, file image)

Confirming that she was at Charles de Gaulle to pick Sobhraj up and drive him to a secret address in the greater Paris area on Saturday, Ms Coutant-Peyr said: ‘It’s taken him more than nineteen years to regain his freedom and I am very happy and also very outraged.

‘He was unjustly sentenced on a file fabricated with documents falsified by the Nepalese police.

‘It’s a scandal that he’s been presented as a serial killer – the accusation is completely false.’

An airport source meanwhile confirmed that Sobhraj’s Christmas Eve arrival was ‘carried out under the tightest security possible.’

Sobhraj – who has a record for using forged identity documents – was ushered through passport control ‘and there were no problems with his French passport,’ said the source.

‘Security was very strict – everything was done to ensure a smooth arrival, and he is now a free man.’

After border controls, Sobhraj was allowed to pick up his luggage, before meeting up with his legal team, including Ms Coutant-Peyre. 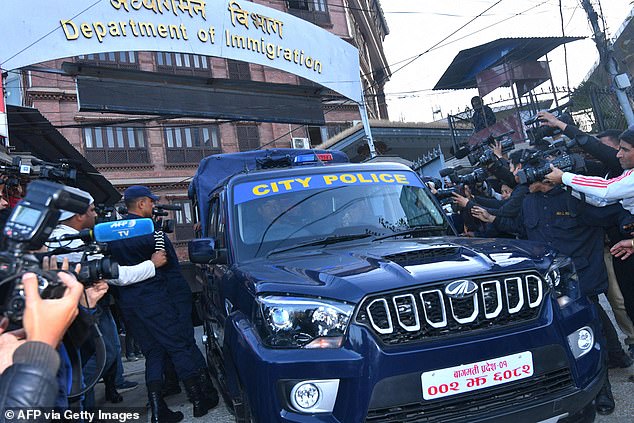 An airport source meanwhile confirmed that Sobhraj’s Christmas Eve arrival was ‘carried out under the tightest security possible’. Pictured is a police vehicle believed to be carrying the serpent to the airport on December 23 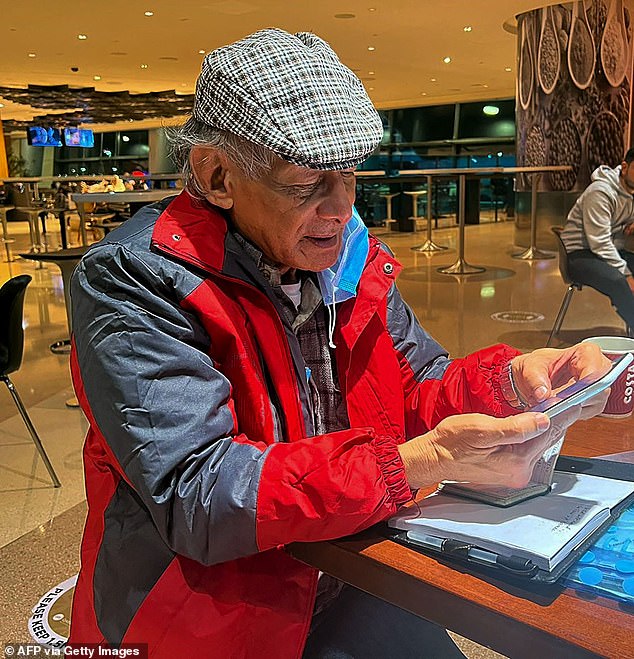 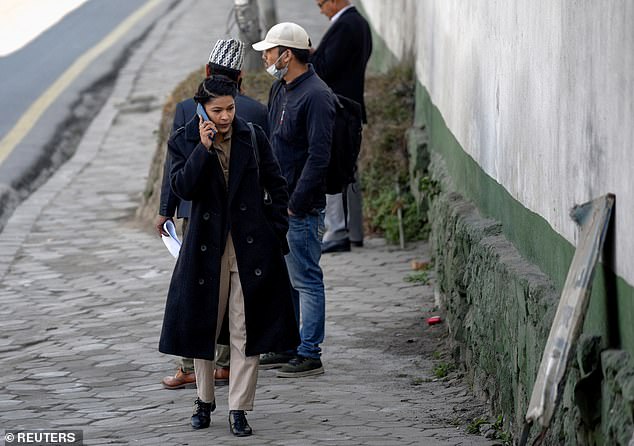 Sobhraj’s wife Nihita Biswas walks outside the department of immigration as Sobhraj is taken inside after his release from jail. While in prison in 2008 Sobhraj married Biswas, who is 44 years his junior and the daughter of his Nepalese lawyer 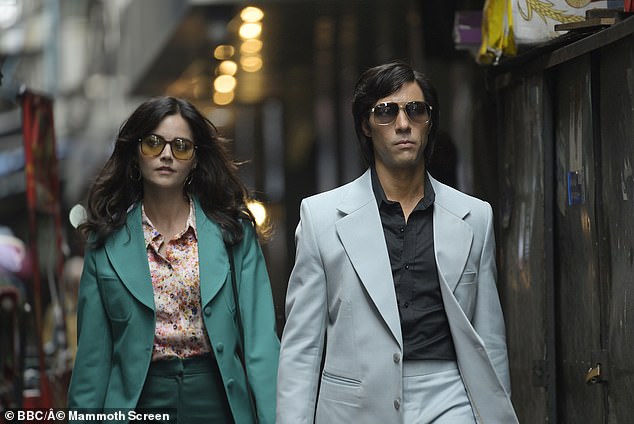 Sobhraj’s murders inspired the 2021 BBC drama ‘The Serpent’ which starred Tahar Rahim as the killer and Jenna Coleman as his lover, Marie-Andrée Leclerc

Sobhraj had flown out of Nepal from Kathmandu to France without his own wife Nihita Biswas, who is 44 years his junior, and there was no clue as to whether she would join him in France later.

Sobhraj was pictured on a Qatar Airways flight to Paris, where he told a reporter: ‘I didn’t do anything. I am innocent in those cases, OK? So, I don’t have to feel bad for that, or good. I am innocent. It was built on fake documents.’

Nepal’s Supreme Court had ordered that Sobhraj, who was serving a life sentence – 20 years in Nepal – be released because he was suffering from a heart condition and had also almost completed his two decades inside.

The killer was taken from his cell to hospital in Kathmandu in 2017 with the help of his wife for a life-saving coronary operation.

He is now expected to undergo medical treatment in France, which might involve open heart surgery.

A source close to Sobhraj in Nepal said: ‘His wife has said he may need further surgery and he will be closely monitored by doctors after he lands.’.

Sobhraj married Nihita Biswas, who is the daughter of his Nepalese lawyer, in prison in 2008.

She was pictured earlier on Friday on the phone walking outside the department of immigration as Sobhraj was taken inside, but her whereabouts as her husband got on the plane were unknown.

Their relationship is similar to that of Isabelle Coutant-Peyre, 70, and The Jackal, 73, who met in prison, and who have wanted to get married since the early 2000s.

Such as a union has been frustrated by legal issues, however, so Ms Coutant-Peyr is now devoted to seeing her fiancé released, so they can finally wed.

Sobhraj was incarcerated in Nepal in 2003 after being convicted of murdering two American tourists.

The master criminal was born in Saigon, then part of French Indochina, in 1944, to an Indian father and Vietnamese mother who later married a French Army officer.

Sobhraj moved to France as a teenager, where he fell into a life of petty crime, and was first imprisoned for burglary in Paris in 1963.

His first wife was Chantal Compagnon, a young Parisienne, and the mother of his daughter, Usha.

The family’s jet-setting lifestyle was largely financed by Sobhraj posing as a jewellery salesman, and then drugging, robbing and then murdering victims, many of them tourists.

Those he killed with the help of his lover and accomplice, Marie-Andrée Leclerc – whom he formed a relationship with after leaving Compagnon -included backpackers.

By 1975, the couple were being assisted in their crimes by Ajay Chowdhury, an Indian friend.

Sobhraj claimed that the murders were often accidental drug overdoses, but detectives proved that he in fact wanted them out of the way so that they would not report him to the authorities.

Sobhraj was eventually linked to more than 20 killings, and police dubbed him ‘The Serpent’ because of the way he used numerous fake identities to evade justice.

He has been in prison in the Himalayan republic since 2003 for murdering two North American tourists.

His life of crime was dramatized in the eight-part BBC miniseries ‘The Serpent’, in which Sohhraj was played by Tahar Rahim, the 41-year-old French-Algerian actor, who also happens to live in Paris.

Sobhraj’s lawyer Gopal Siwakoti Chitan told reporters after the murderer’s release that the request for travel documents must be made by the immigration department to the French embassy in Nepal.

He originally speculated that this could take some time – as offices are closed over the weekend for the Christmas holiday – but this was not the case as Sobhraj was on a plane back to France within a few hours. 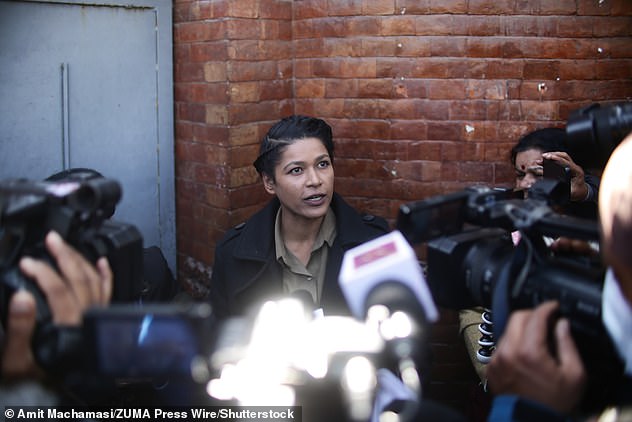 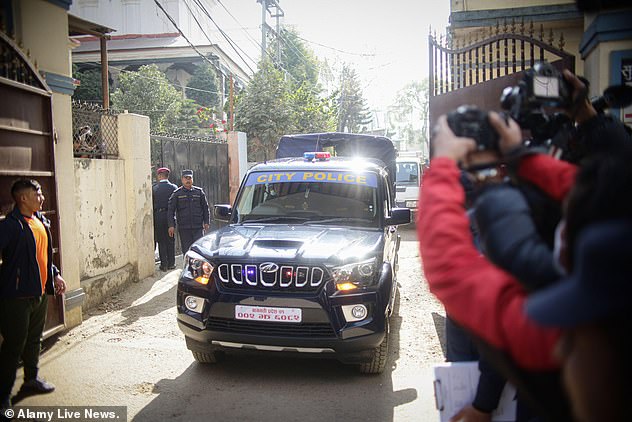 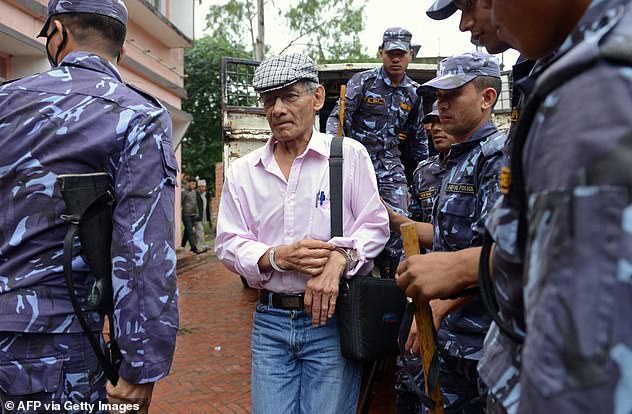 Charles Sobhraj, a French serial killer who was responsible for a string of murders across Asia in the 1970s, was released from prison in Nepal on health grounds. He is pictured being escorted to a Nepal court in May 2014 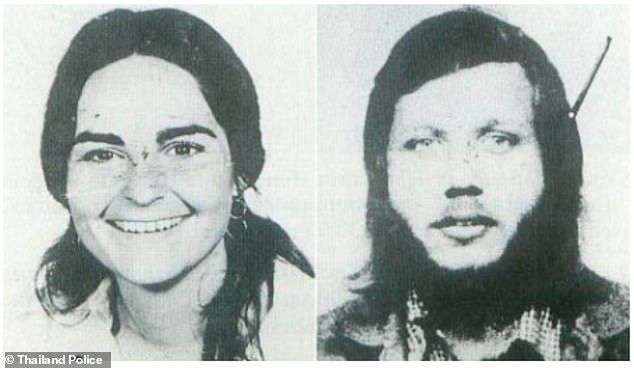 Sobhraj was eventually handed a life sentence in 2004 for killing US tourist Connie Jo Bronzich (left) in 1975. A decade later he was also found guilty of killing Bronzich’s Canadian companion Laurent Carrière, right

The court document said he had served more than 75 per cent of his sentence, making him eligible for release.

The French national was taken to immigration detention where he was escorted inside by police in bulletproof jackets. Sobhraj wore a medical face mask, a brown woolly hat and a blue padded jacket.

He was then taken to Kathmandu airport for his deportation to France where he was expected to arrive early Saturday.

Nepal’s top court ruled on Wednesday that he should be deported within 15 days and his lawyer said that a ticket had been booked for him on Friday.

‘Nepal’s government wants to send him back as soon as possible. Sobhraj also wants that,’ Gopal Shiwakoti Chintan told reporters.

It is believed he committed his first murder in 1975, that of a 21-year-old woman from Seattle called Teresa Knowlton. Her body was found on a beach in Pattaya, Thailand wearing a bikini.

This inspired the killer’s nickname ‘The Bikini Killer’.

His next victim was Vitali Hakim, whose burnt body was found on the road to the Pattaya resort, followed by fiancées Henk Bintanja and Cornelia Hemker, who had been poisoned by Sobhraj and then nursed back to health.

While they were staying with him, a visit from Hakim’s French girlfriend, Charmayne Carrou, threatened to expose him, and so he strangled the pair and burned their bodies.

He murdered at least two others in Thailand before fleeing to Kolkata, India, where he killed student Avoni Jacob simply to obtain his passport. He later murdered Jean-Luc Solomon by poisoning him.

In 1976, Sobhraj attempted to drug a group of 60 French students on holiday in New Delhi in an attempt to rob them of passports and cash by giving them sleeping pills disguised as antibiotics.

But this time it backfired when the poison began working faster than he expected. When the first few students began falling where they stood, the others became alarmed and called the police. He was sentenced to 12 years in prison for murder.

He was eventually linked to more than 20 killings. His victims were strangled, beaten or burned, and he often used the passports of his male victims to travel to his next destination.