Beautiful, talented and with an Olympic gold medal to her name, Alina Kabaeva was once regarded as the most eligible woman in Moscow. Today, though, she has a rather less desirable epithet, as “Russia’s Eva Braun”.

Kabaeva, 38, is the former gymnast turned politician who is widely believed to be the girlfriend, or possibly the wife, of Vladimir Putin. She is even rumoured to have given birth to four children by the Russian president, though reports of any relationship between the two have always been denied by the Kremlin. 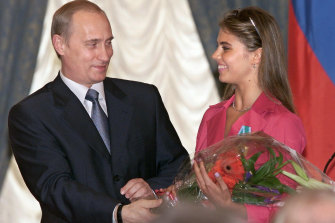 As Putin commits ever greater atrocities in Ukraine, Kabaeva and her children are reportedly holed up in a Swiss chalet, facing growing demands to be extradited back to Russia.

“It’s time you reunite Eva Braun with her Führer,” says a Change.org petition to the Swiss government signed by almost 64,000 people at the time of writing, comparing her to the woman who married Adolf Hitler in his Berlin bunker the day before they took their lives. 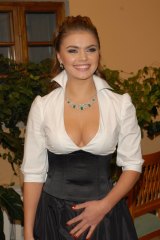 Ex-gymnast and politician Alina Kabaeva, who has been linked to Russian President Vladimir Putin.Credit:CC/Flickr account l3o_

Opponents of Putin believe Kabaeva is in hiding near Lugano, a quiet lakeside city known for its celebrated chocolate museum, though there is no proof she is even in Switzerland. Other reports place her in an underground bunker in Siberia’s Altai Mountains.

Needless to say, facts about Putin’s private life are hard to pin down. One thing we do know is that the 69-year-old dictator is divorced from his first wife, Lyudmila Shkrebneva, which was confirmed in 2014, six years after Kabaeva was first romantically linked with him.

This, though, has done little to quell the rumours, according to which Kabaeva continues to be Russia’s secret first lady, paid a £7.7 million ($13.5 million) salary for her job controlling a pro-Kremlin media group.

Dr Elisabeth Schimpfössl, a senior lecturer at Aston University and author of Rich Russians: From Oligarchs to Bourgeoisie, says she has heard rumours that “Vladimir Putin and Alina live together in the Kremlin”.

Born in Tashkent, Uzbekistan, in 1983, Kabaeva’s father was a professional footballer and her mother played basketball for the national side, but she is said to have left her roots firmly in the past once success came her way.

“She was Tatar [a Russian ethnic minority with Turkic and Islamic connections] but she wasn’t remotely interested in [talking about] that,” says a source who knew her in the mid-2000s. “She didn’t talk about her parents or her background. I did ask, but she wasn’t particularly interested.”

Kabaeva is said to have started rhythmic gymnastics at the age of five, and her parents took her to Moscow where she was taken under the wing of Irina Viner, a former Soviet-era coach.

By the age of 13, she was competing for Russia, and then went on to win 14 world championship medals, 21 European championship medals and Olympic gold at the 2004 Athens Games. A doping conviction in 2001 saw her stripped of the world title she had won that year.

The source who knew her when she was in her early 20s said she lived at the time in a “modest and quite Soviet” flat near the Central Moscow Hippodrome, decorated with small glass ornaments, and described her as “a sweet girl – simple, nice and friendly”. She seemed to want companionship more than anything. 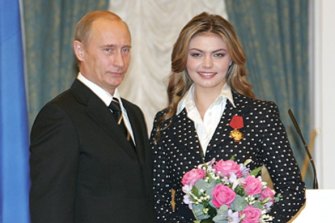 Alina Kabaeva, who has been linked to Vladimir Putin, decorated with the Order of Merit for the Fatherland by the Russian President in 2005.Credit:Internet

At the time, Kabaeva had a boyfriend, a Moscow-based policeman originally from Georgia, who “overnight became a colonel and got promoted wildly up the ranks”, says the source. “She talked to me about him and looked quite proud.”

She remembers Kabaeva as a “quite naive and excited” young woman who “seemed younger than her age” and was not particularly stylish. One day, she says, a bag of clothes arrived at Kabaeva’s apartment. “[They] looked really random, [there were] things like fake Turkish Chanel [items],” says the source, who never found out who had sent them. “She was showing me and asking, ‘Do you like them?’.“

Her confidence clearly grew in line with her success as a gymnast. She became so popular that a Russian pop group recorded a song about her entitled Alina. Nor was she particularly modest about her talents. “Being a star in gymnastics is not just about skill,” she told one interviewer, “it is also about personality. Look at me. I don’t want to be rude, but everyone wants to be like Alina Kabaeva.”

Dr Schimpfössl says it was through sport rather than politics that Kabaeva met Putin. Viner, who married the oligarch Alisher Usmanov, introduced them, she says. In 2001, Putin was pictured beside Kabaeva as he awarded her an Order of Friendship (a state decoration) at the Kremlin. 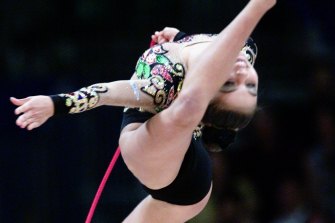 Alina Kabaeva in action as a gymnast.Credit:Trent Parke

Kabaeva’s relationship with the Georgian policeman reportedly ended in 2005. She is on record as saying subsequently she had met a man who “I love very much”, adding: “Sometimes you feel so happy that you even feel scared.”

Described as Russia’s most flexible woman, she retired from gymnastics after 2004, but made a brief comeback in 2007, by which time her sights were firmly set on politics. It was in that year that Kabaeva was elected to the State Duma, representing the pro-Putin United Russia party.

The source next saw her in 2008, by which point Kabaeva’s life appeared to have changed dramatically. The source was attending an awards ceremony in Russia, where Putin himself was present. She was shocked by how much weight Kabaeva had gained, but a fellow guest told her: “Well, she’s pregnant.” He also told her Kabaeva was in a relationship with Putin. The source witnessed no physical interaction between the gymnast and Putin that evening, but she noticed the attention Kabaeva was attracting from others: “There was a circle of people staring at her as she twirled around.“

Her career had branched into modelling and hosting a television chat show called Steps to Success, and in 2014 she announced she was quitting parliament to take control of the pro-Kremlin National Media Group. 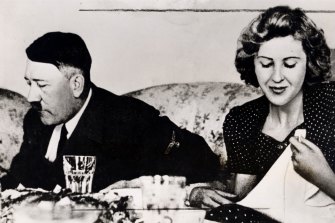 In November last year, The Insider, a Russian investigative journalism website, reported she was paid an annual salary of 785 million roubles ($10.9 million), basing the figure on leaked tax records for 2018. She is reported to have been seen wearing a wedding ring, and there have been claims she and Putin married in the Iversky Monastery in the Valdai hills.

Rumour has it that she gave birth to a son by Putin, named Dima after one of the president’s close friends, followed by a daughter and then twins, all of whom are said to have Swiss passports. In 2015, Switzerland’s Bick tabloid reported Putin had flown to Switzerland to be with Kabaeva as she went into labour at a private clinic, although Putin’s spokesman insisted that “information about the birth of a baby fathered by Vladimir Putin does not correspond to reality”.

The twins are said to have been born in 2018, after which Kabaeva disappeared from public view for almost three years.

If she has indeed decamped to Switzerland lately, it is unclear how long she might remain. “Please decide whether the residence of this individual in your country is warranted,” implores the petition to the Swiss government. “It’s time Switzerland takes action.”