So said Anthony Albanese in February 2012 when he declared he’d be backing Kevin Rudd over Julia Gillard during Labor’s turbulent last stint in government. 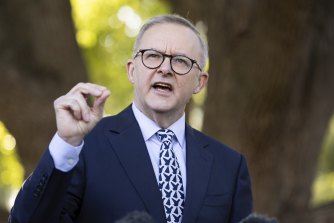 They were simpler times.

A decade on, the slimmed-down, spruced-up Albanese projects less socialist street fighter than do-it-yourself man. Although, we have seen flashes of the old Albo – and the old Labor of “the fair go” – during the past week with his rhetorical push for a minimum wage boost.

As for the Tories, where do they even live these days?

Some weeks back I satirised Tory loyalists in Melbourne’s “blue-ribbon” suburb of Brighton, after state Liberal Wendy Lovell questioned the wisdom of putting social housing in Brighton’s “best street” because, she said, the poor wouldn’t fit in.

Since then, I’ve had to check my smugness. If the polls are accurate, the federal electorate of Goldstein, in which Brighton sits, will evict Tory Tim Wilson for “teal” independent Zoe Daniel.

The prospect of dealignment in Australian politics is discombobulating if, like me, you’re invested in certainties: safe seats, blue and red. Black and white, I am – so rigid I’d say I was on the spectrum except my frame of reference struggles to accommodate the very notion of a spectrum, which maybe proves the point.

I’m stuck in the ideological zeitgeist of the 1950s or ’60s when most people voted along class lines. Before the educated, professional class, what French economist Thomas Piketty calls the “Brahmin left,” drifted to left-of-centre parties. Before the poor and less educated gravitated to populists extolling fireside values of faith, family and country.

As gradually as a glacier thaws, the Liberal Party in its bid for the populist vote has “boganised”. (A term I picked up from the Murdoch press.) Simultaneously, we’ve seen the party’s traditional voters become more socially liberal as the younger generations attend universities where they imbibe Marxist, feminist and post-colonial critiques of fireside values.

Again: class isn’t entirely dead as an electoral force. The socially liberal Liberals might welcome refugees, but wealth redistribution … err … not so much. Thus, the Climate 200 candidate for the NSW seat of Wentworth, Allegra Spender, talks up pro-business tax reforms. Meanwhile, Daniel, in an interview with The Age and the Herald, couldn’t say if she’d welcome more public housing in Brighton.

But the fact remains: the independents are targeting Liberal seats to protest Liberal policies. If they’re not seeking to kick the party from power, they’re at the least aiming to emasculate it. So, while the Liberal voters who intend to defect to independents on Saturday might see themselves as only partly out of the closet, no amount of squinting can obscure the line they’ll be crossing.

The Liberals are also experimenting with political transcendence, if Josh Frydenberg’s campaign launch in Kooyong a few weeks ago is any indication. While the media reports focused on his revenge-of-the-mother-in-law psychodrama with Monique Ryan, far more intriguing, in my view, was the vibe of the thing.

The warm-up acts comprised what we might call “voices from Kooyong,” regular folks rhapsodising their conscientious local member. One was a classic Liberal small-business pitch: a dry-cleaner crediting JobKeeper for sustaining his business during the pandemic.

But we also heard from a widow campaigning for stroke victims and a mother who secured National Disability Insurance Scheme services for her son with Frydenberg’s help. And from campaign volunteer Phil Elwood, a man who does an extraordinary rendition of a kookaburra and sulphur-crested cockatoo, who is a resident in community housing — making him the sort of resident Daniel isn’t sure she wants to welcome to Brighton. He said his relationship with Frydenberg broke a lifetime habit of voting Labor.

This was a parade of battlers and the marginalised up against aloof bureaucracies. Not a whiff of the professional elites whose votes the Treasurer’s vying for. It’s as if the only way the Liberals can retain the support of these newly radical, self-hating elites is by disavowing any affinity with them. Or by daring them to pronounce the likes of Elwood deluded for acting against their own interests in backing the slash-and-burn Liberals.

Regardless, Frydenberg is associating himself with the underdog – which is no doubt how he sees himself this election – while Ryan, former director of neurology at Melbourne’s Royal Children’s Hospital, hammers status and authority by constantly referring to herself as “doctor”.

The latter can also be said of Michelle Ananda-Rajah, Labor’s candidate for the wealthy Victorian electorate of Higgins: an infectious diseases expert, her campaign photograph features a stethoscope around her neck, as if she’s angling for a job in a hospital rather than in parliament.

All that said, if this new dealignment in Australian politics ends the policy constipation on climate change, the shattering of my political certainties is a small price to pay. Still: pity my confused soul.

For if Tories are no longer Tories, then I’m no longer sure who Albo’s fighting, assuming he still has some fight leftover.