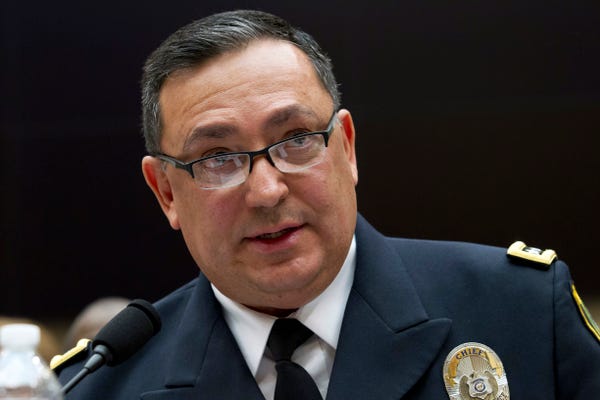 Houston Police Chief Art Acevedo called it "inexplicable" that four of his officers fired 21 shots at Nicolas Chavez who was already incapacitated during an April call to a mental health crisis.

Three earlier shots fired at Chavez, including one by a different Houston officer who was not terminated, were found to be objectively reasonable, the chief said. Chavez was also struck with five taser cartridges and bean bags.

"You don't get to shoot somebody 21 times because, at that time when we discharged those 21 rounds, Mr. Chavez was at his greatest level of incapacitation," Acevedo said.

Police received five 911 calls on April 21 reporting that Chavez was having a mental health crisis, acting erratically near cars and attempting to harm himself.

On Thursday, Acevedo released the recorded calls and graphic body cam footage from the incident.
Explaining the evidence, Acevedo told reporters that when officers arrived on scene, they attempted to put their deescalation training into use.

When Chavez "moved quickly" toward officers while carrying what they believed to be a knife, though, a fifth officer on scene fired three shots. He and command staff found the three shots to be "objectively reasonable" considering the circumstances.

After that, though — while Chavez was on the ground — officers continued to fire. Leblanc discharged two shots; Tapia, six shots; Alvarado, seven shots; and Rubio, six shots.

The gunshots left 29 entry and exit wounds in Chavez, many of them from fragments of bullets that struck the pavement before entering him, Acevedo said. Ballistic reports were still being completed.

The Houston Police Officers' Union said during a press conference on Thursday that their firings were "unjust" because the officers had acted according to policy and acted responsibly.

"They did everything that everyone across this country is asking the armed forces to do: They deescalated and retreated for 15 minutes," Joe Gamaldi, the president of the union, said. "They used every nonlethal option available."

Acevedo, too, said that the officers initially used proper deescalation training, but then explained where he said their actions went south.

There were 28 police officers on scene who could have provided cover and many nonlethal options that still could have been used before the last 21 shots were fired he said.

He also condemned the union for jumping to defend the officers "without even seeing the video."

All four officers have since appealed their firings.

Terminating problem officers can be a challenge, if arbitrators find a history of similar incidents for which officers hadn't been reprimanded, experts previously told Insider.

"Quite frankly, it's inexplicable to me, when they had plenty of opportunities to back up and continue to do what they were doing, for them to stay the line and shoot a man 21 times. I cannot defend that," Acevedo said. "And for anyone that wants to defend it, don't come to this department."

Some police chiefs genuinely want to fire their bad apples. Their department's history can make that almost impossible.