THAI riot cops turned water cannons on protesters as they defied an order banning them from the streets amid mounting tensions over the monarchy.

They pushed forward in formation with riot shields and batons raised to try and disperse thousands of chanting pro-democracy activists in central Bangkok. 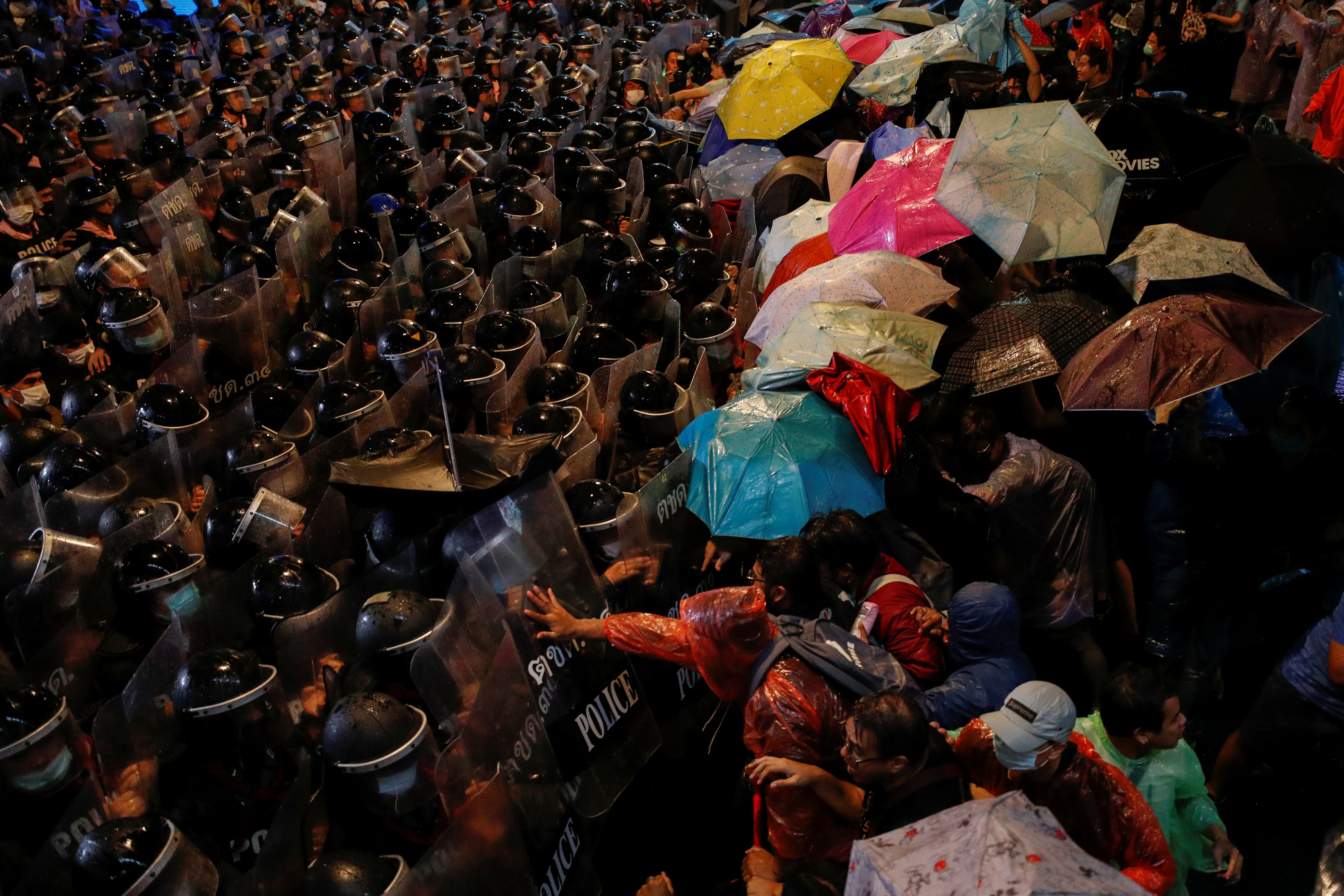 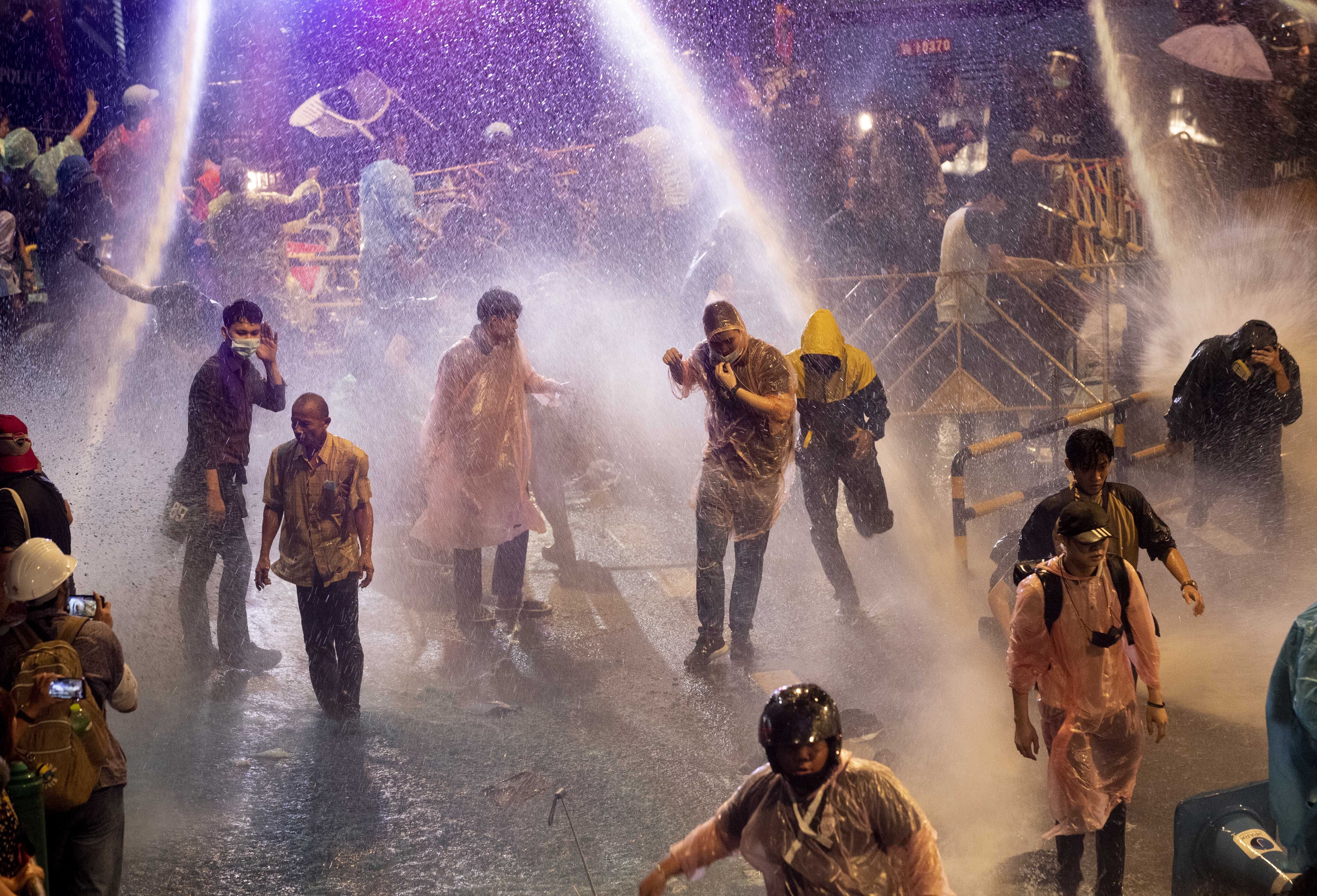 The crowds tried to shove back – some using umbrellas- while others hurled plastic bottles at hundreds of officers dressed head-to-toe in riot gear.

At one point a lone protester stood in front a huge water cannon truck – an image being likened to the Tiananmen Square Massacre 'Tank Man.'

The protesters gathered in monsoon rains to demand PM Prayuth Chan-ocha quits, the constitution be amended and the once-loved royal family undergo reform.

Images showed them being showered with chemical-laced water during mulitple clashes across the capital city.

Other dramatic photos showed the crowds joining forces to push back against police lines. 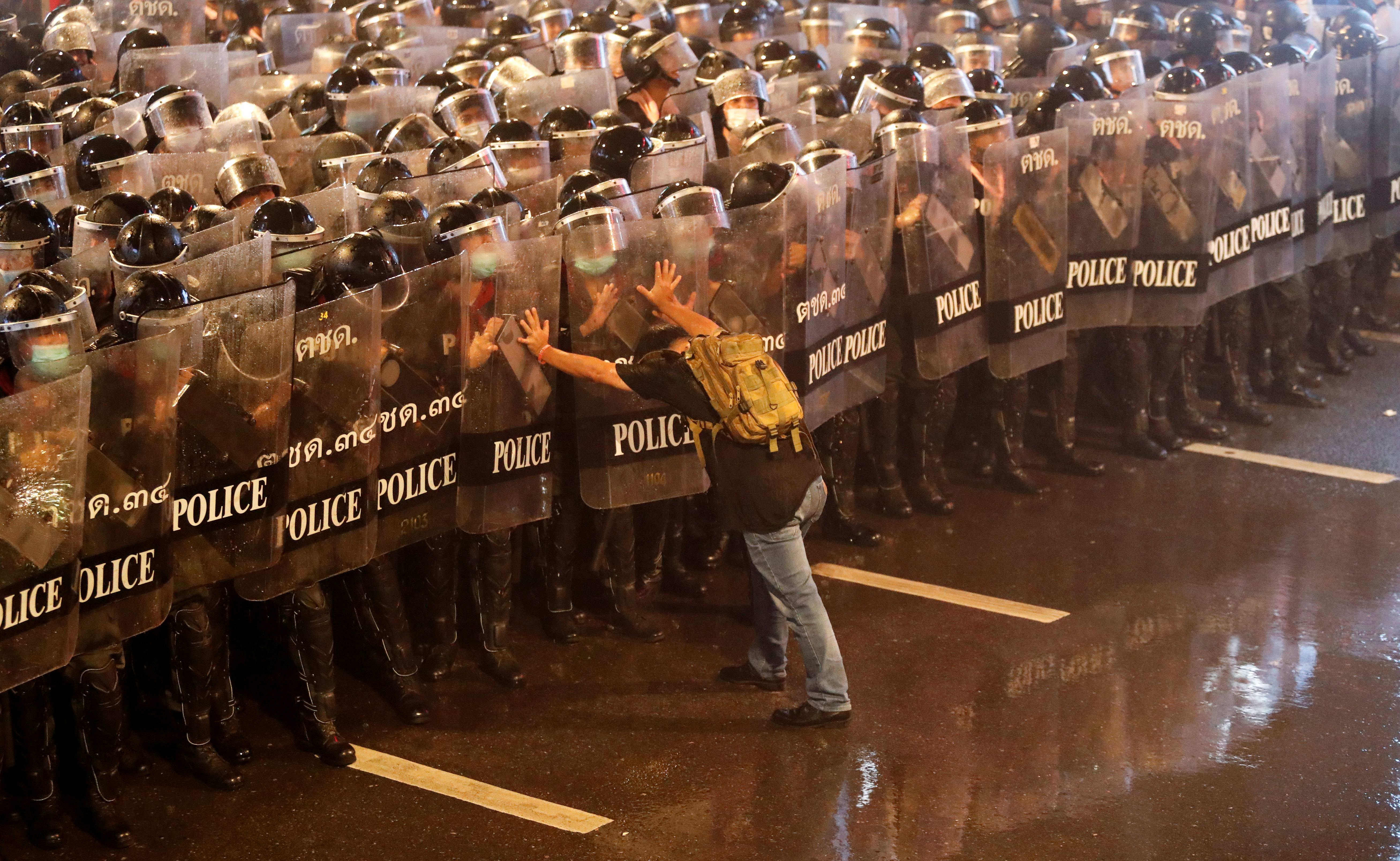 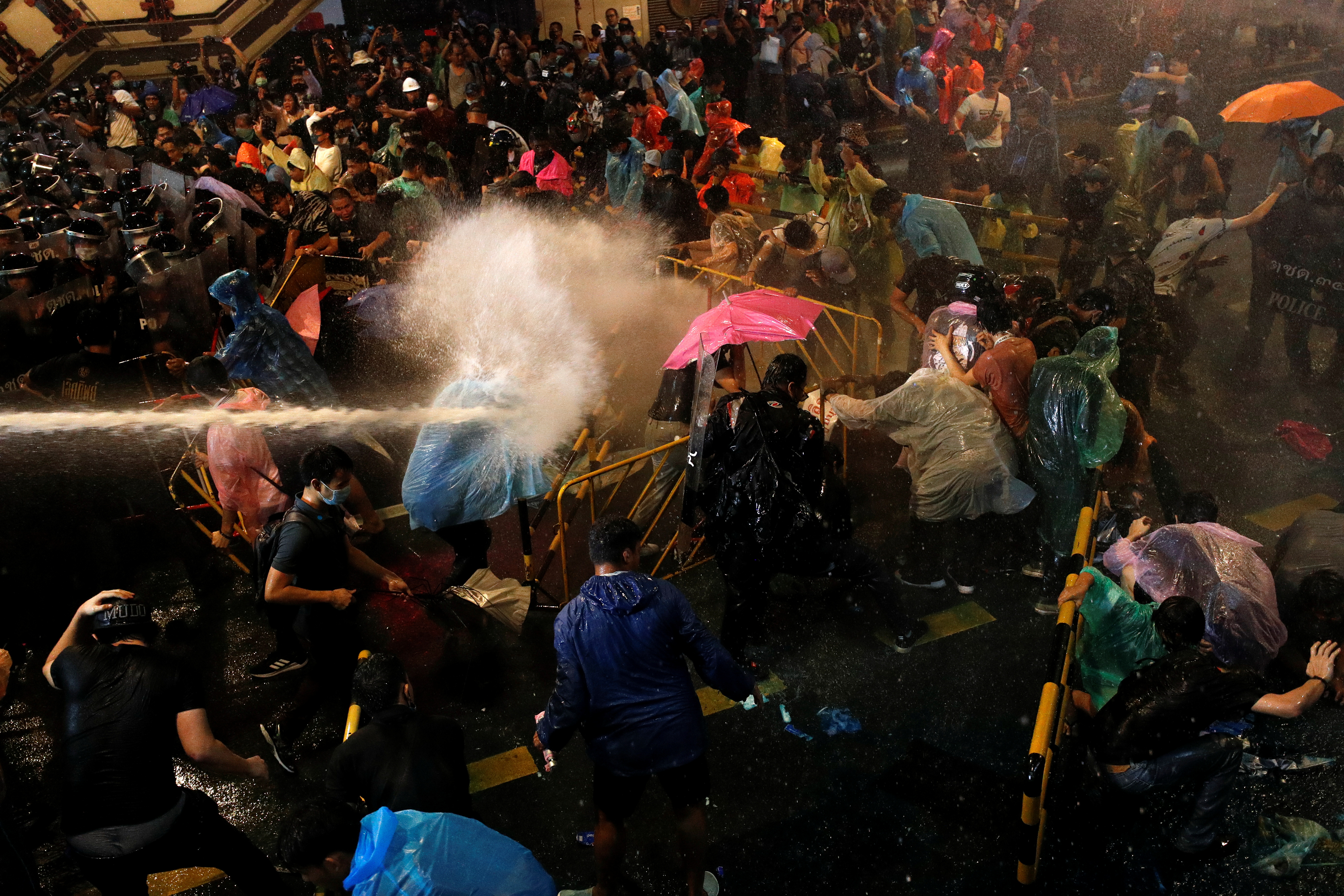 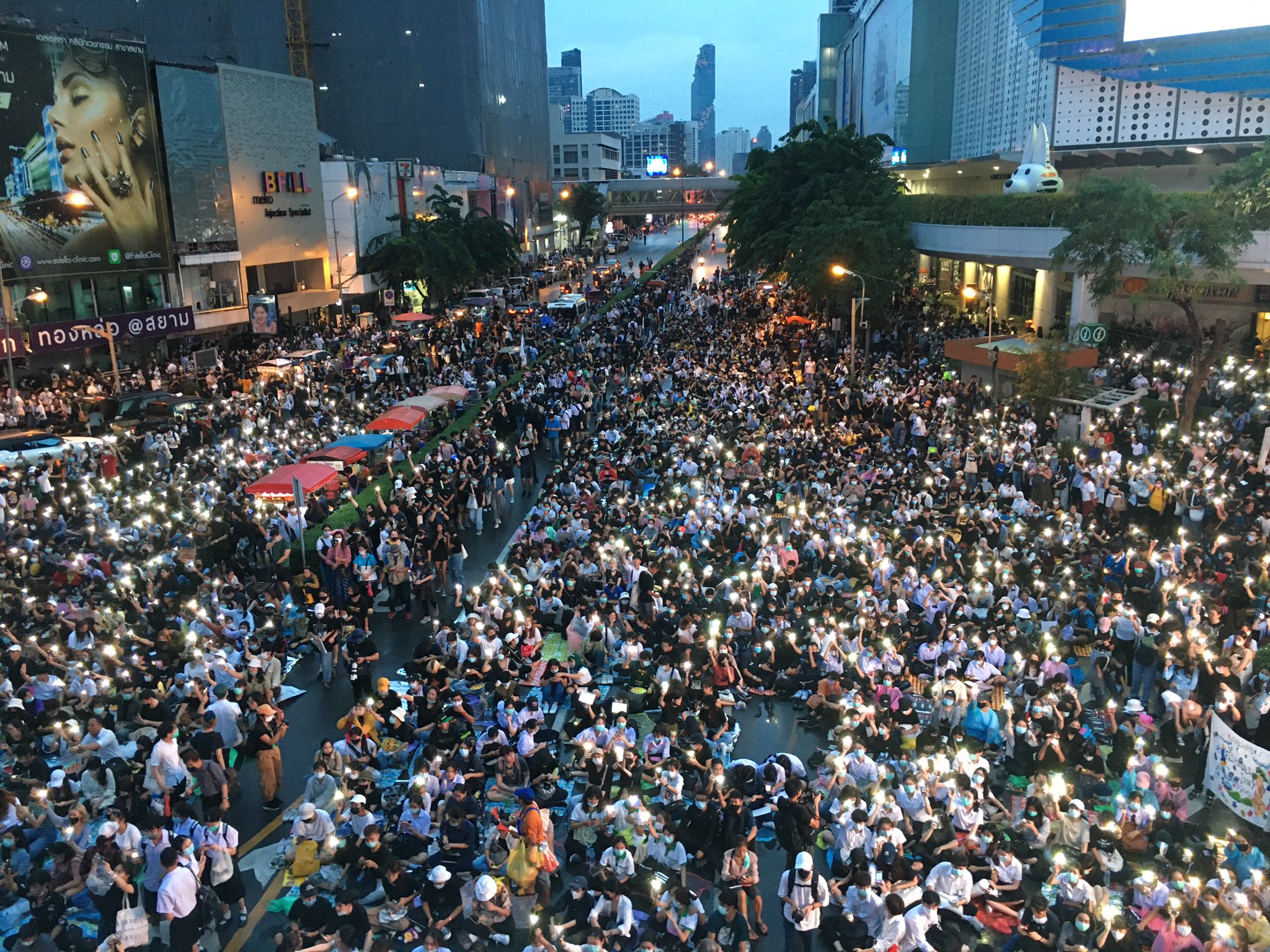 It was the second day activists defied an order not to gather, imposed after they heckled a royal motorcade, an unprecedented development in Thailand.

Police had earlier closed roads and put up barricades around a major intersection where around 10,000 protesters defied the new decree on Thursday.

Police in riot gear secured the area, while malls in the normally busy shopping district shut up shop early.

Nearby mass transit stations were closed to stop crowds of protesters from getting near the area.

"Get out, get out," the protesters chanted as police used the heaviest force yet to stop three months of protests. 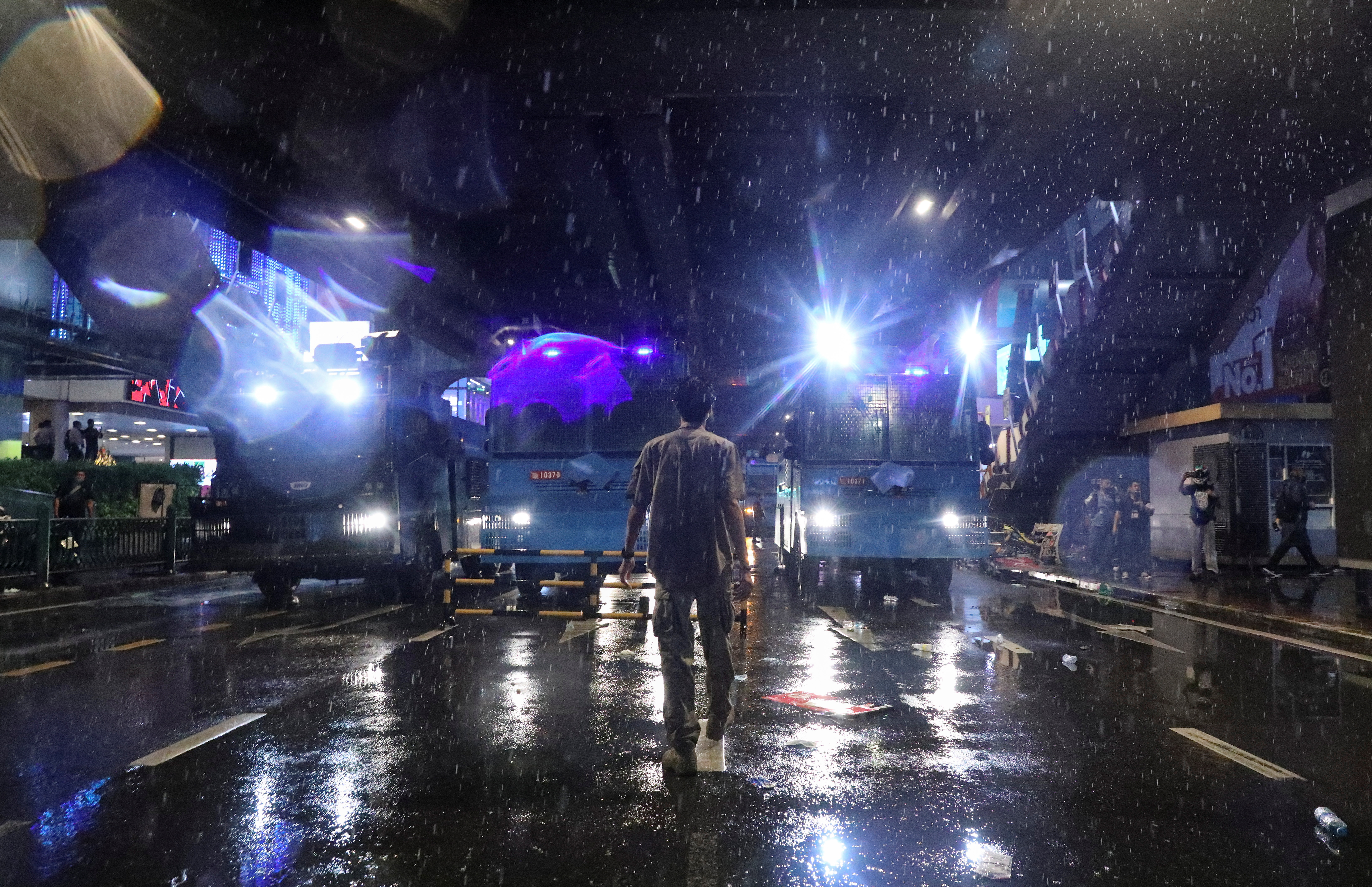 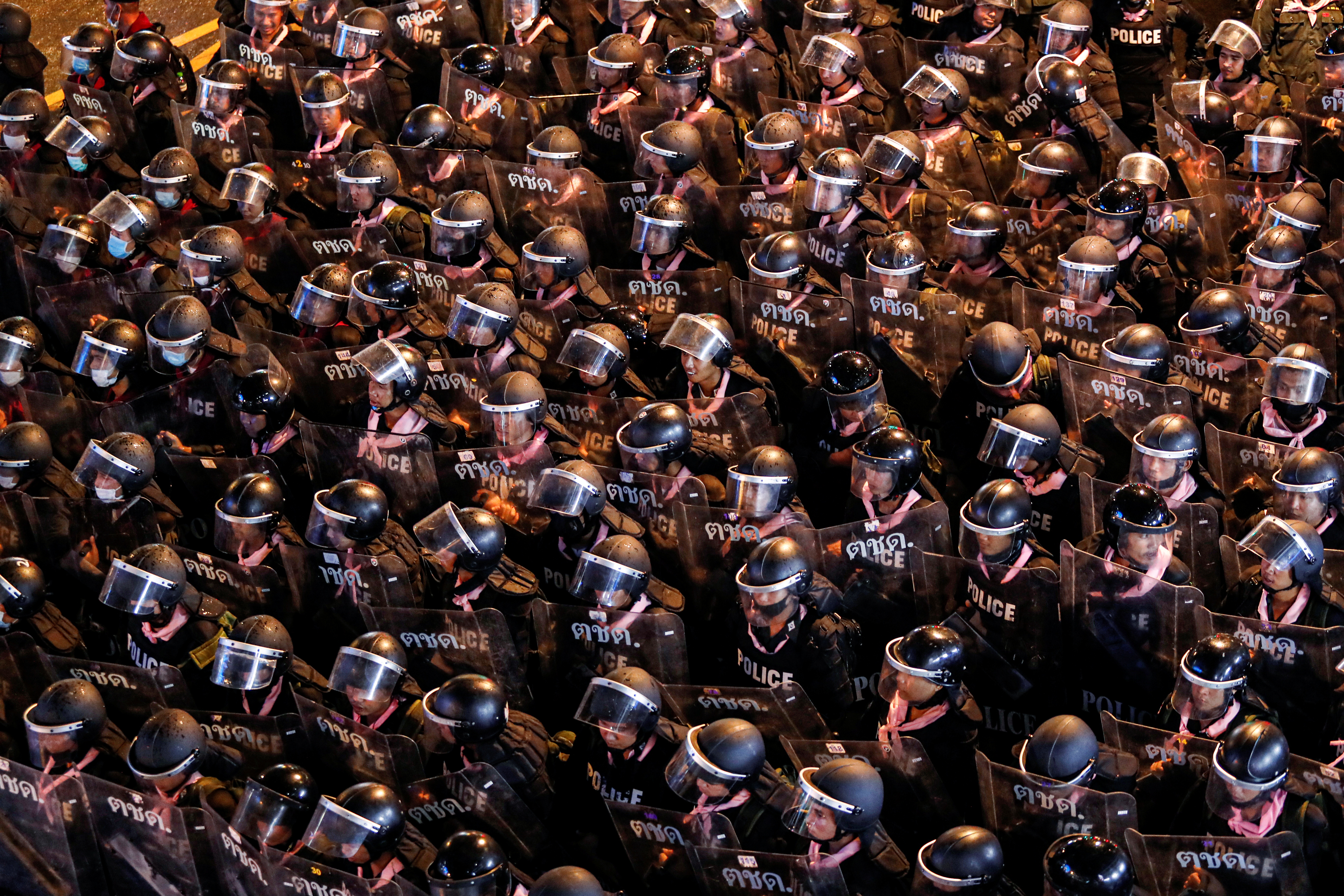 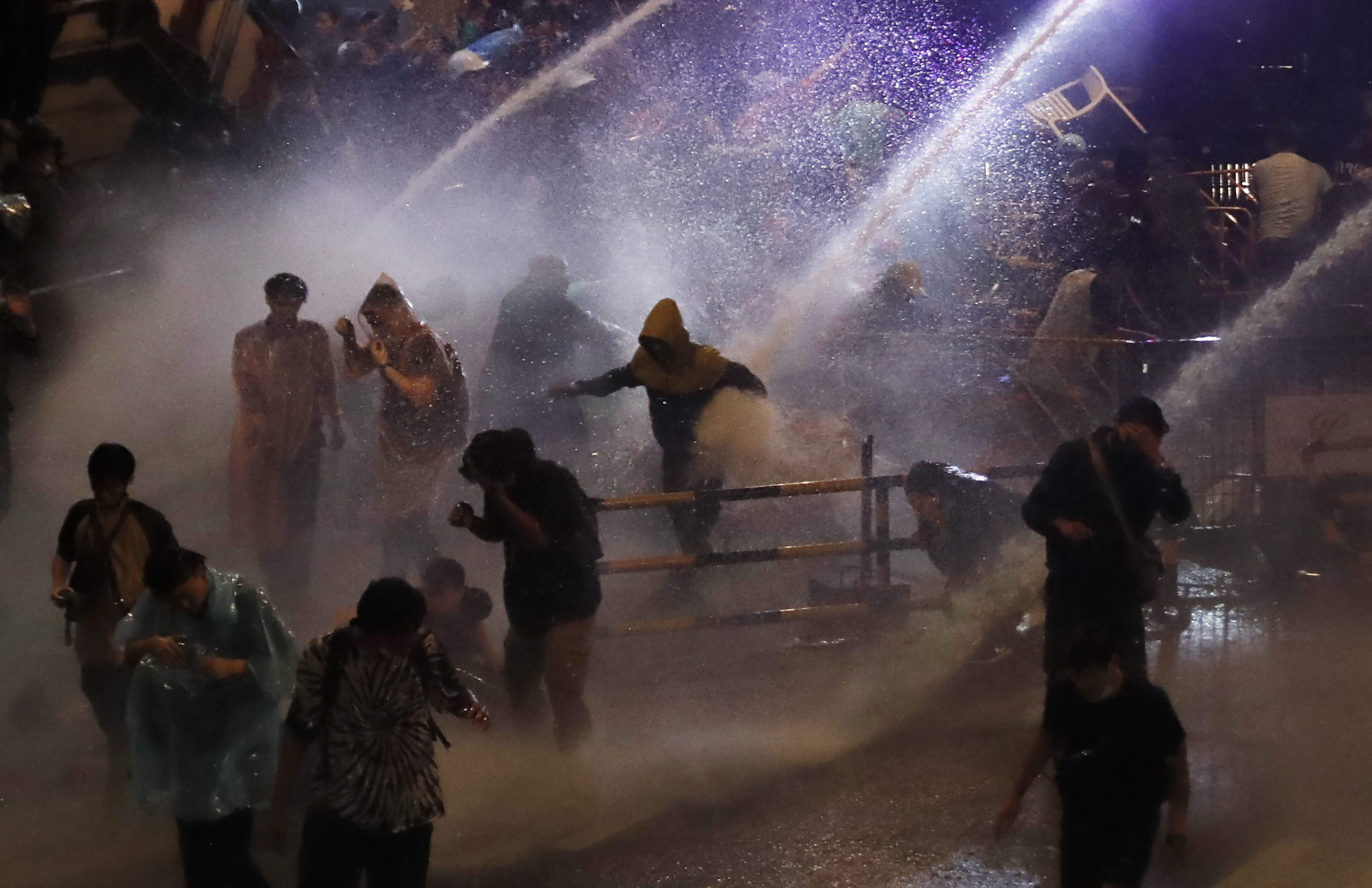 "The dictatorial government is using violence to disperse the people's movement," said Tattep Ruangprapaikitseree, one of the protest leaders.

A ban on gatherings of more than five people was imposed on Thursday.

"After this there will be intensive measures in enforcing the law."

One protest sign read 'Release our friends' – a reference to the arrest of more than 40 protesters this week. 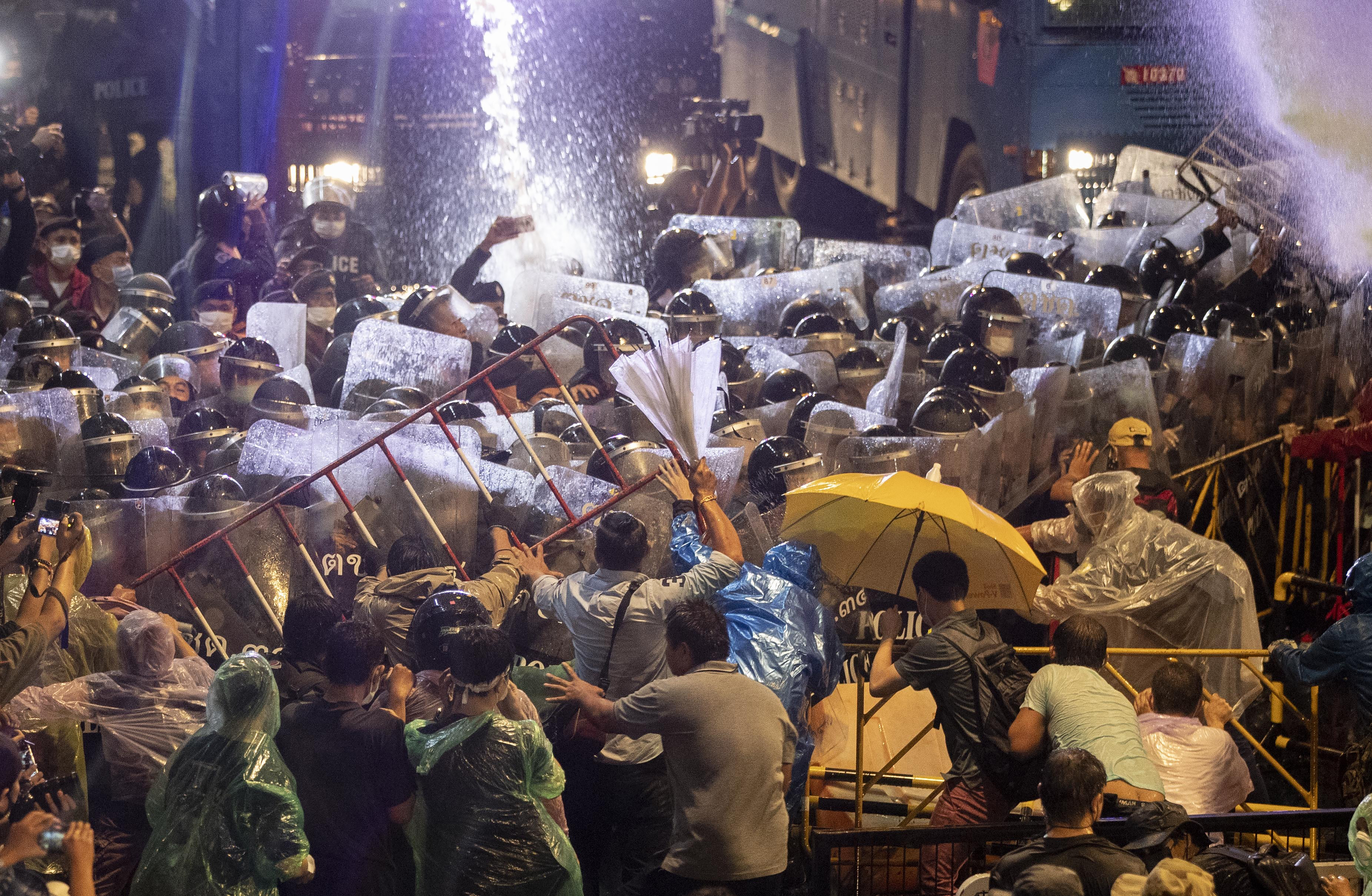 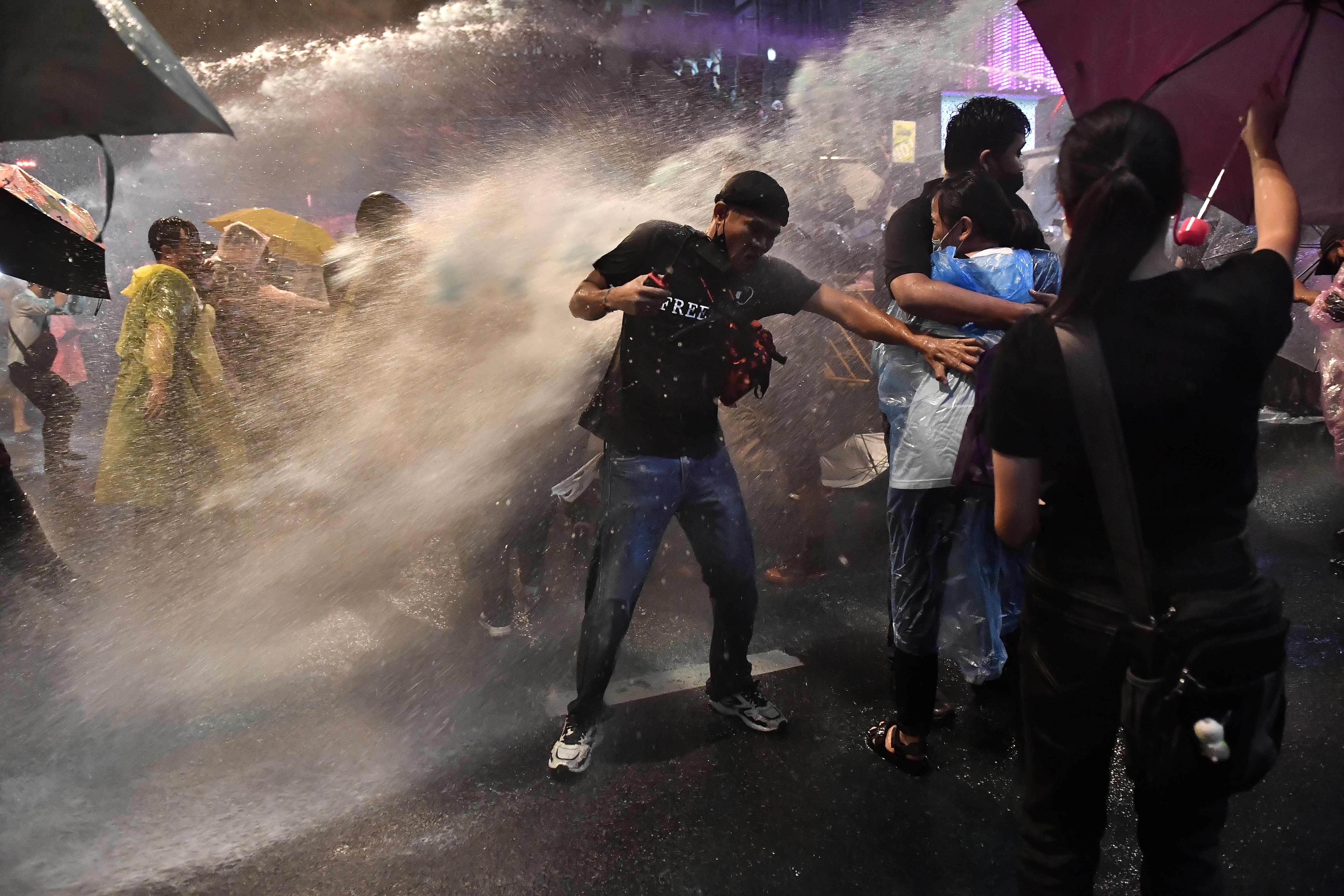 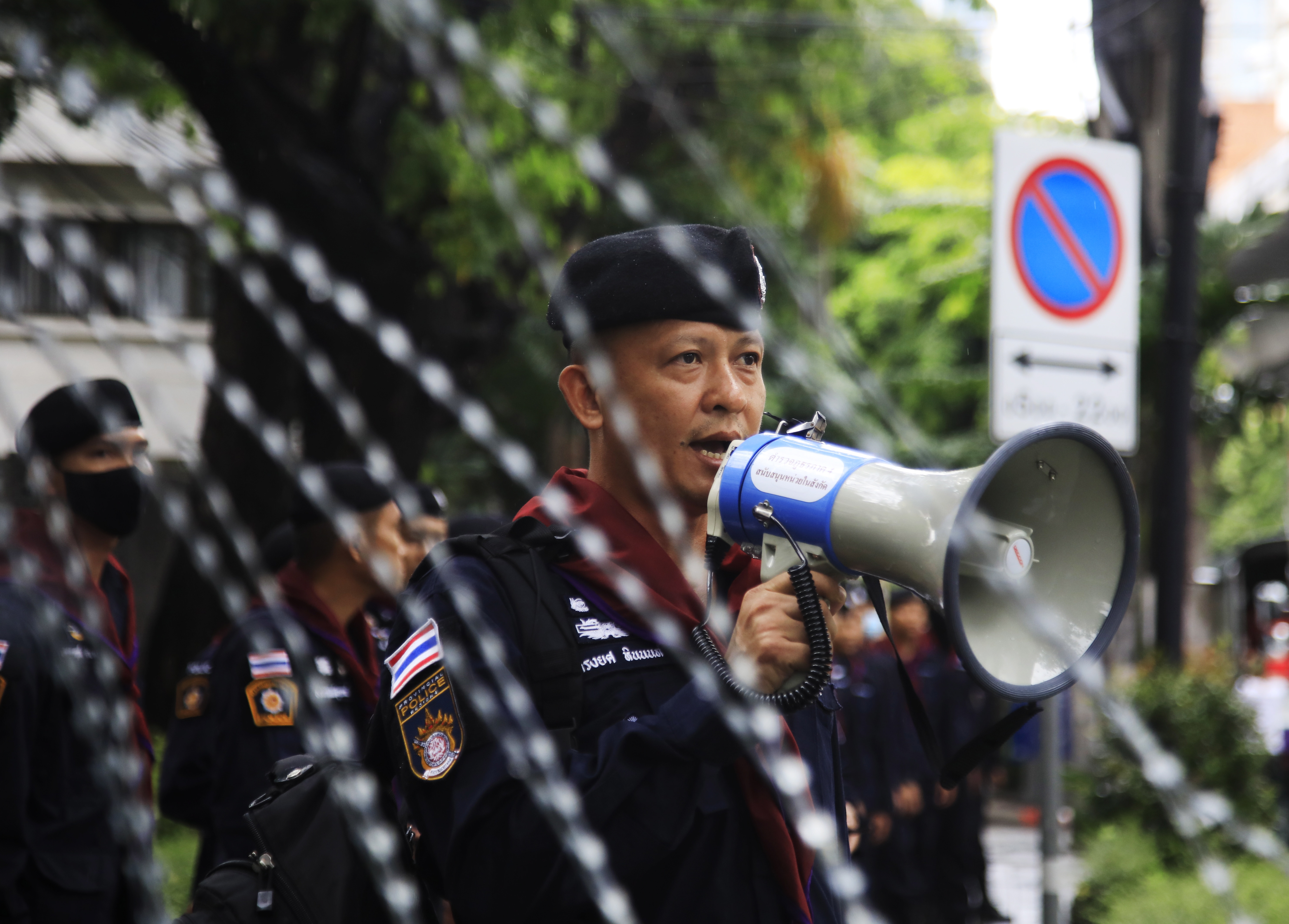 Critics say he engineered a general election last year to keep hold of power as he country's civilian leader.

Protesters also want a new constitution, to replace the one drafted under military rule.

"I'm not quitting," Prayuth told reporters after an emergency cabinet meeting, adding emergency measures would be in force for up to 30 days. 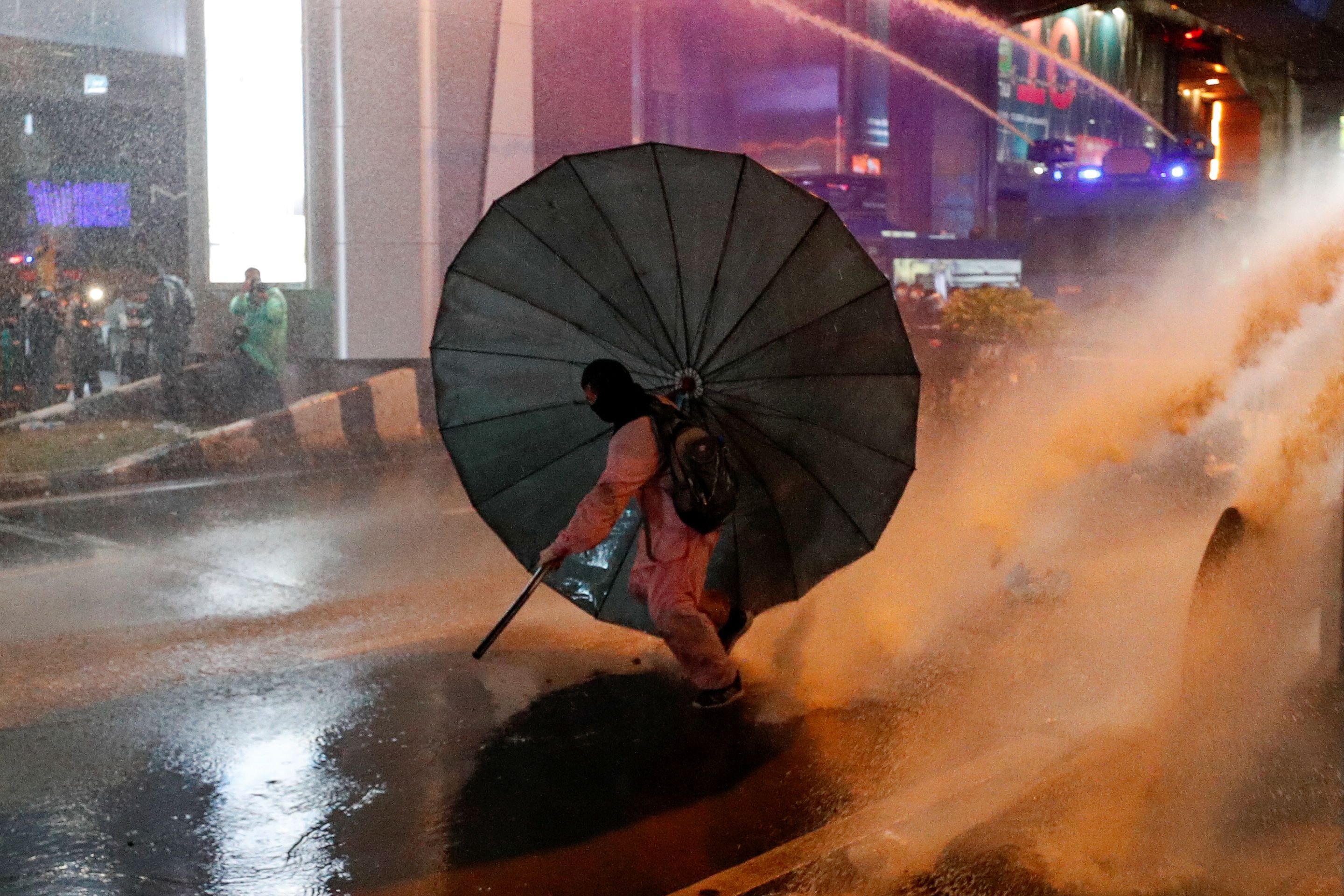 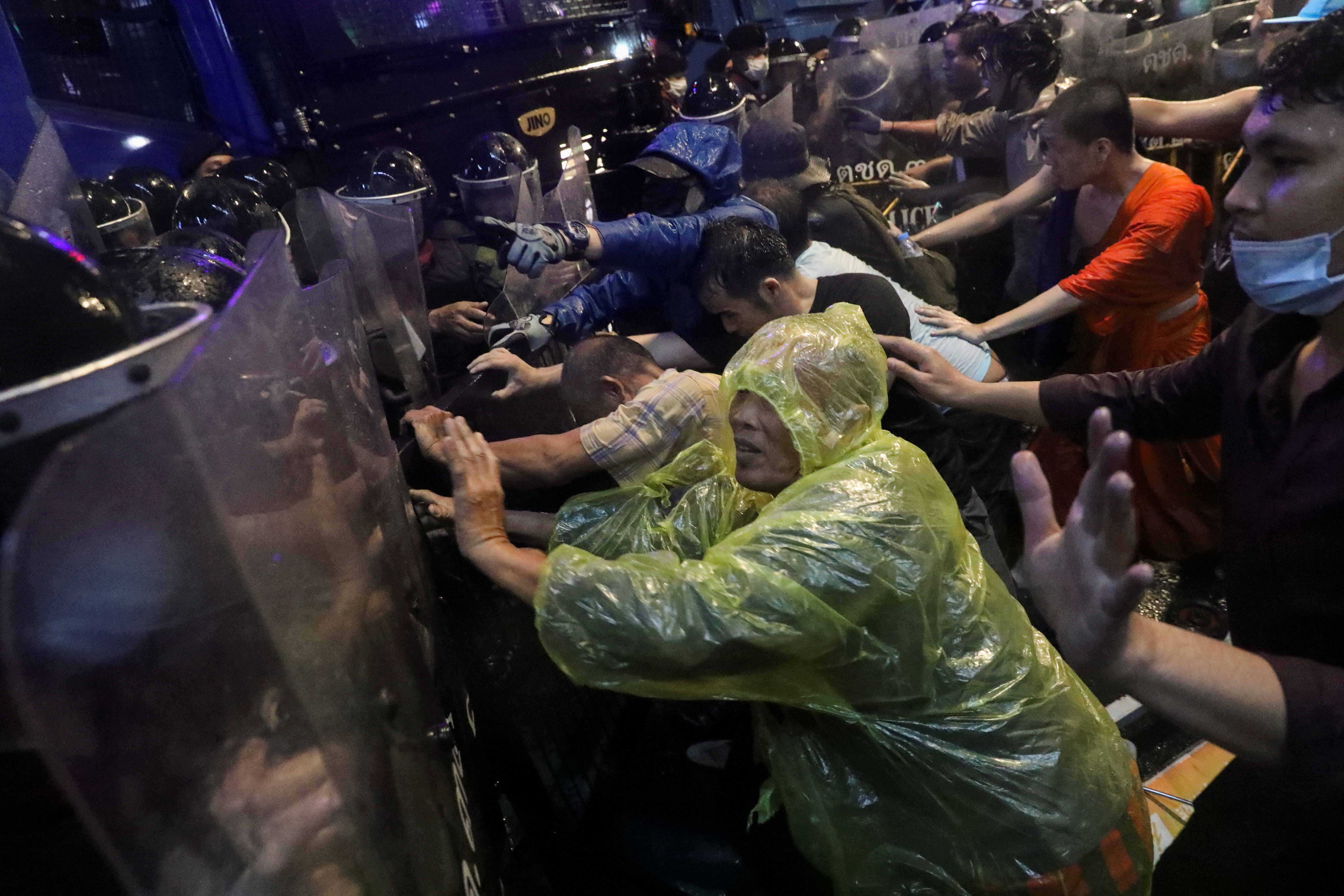 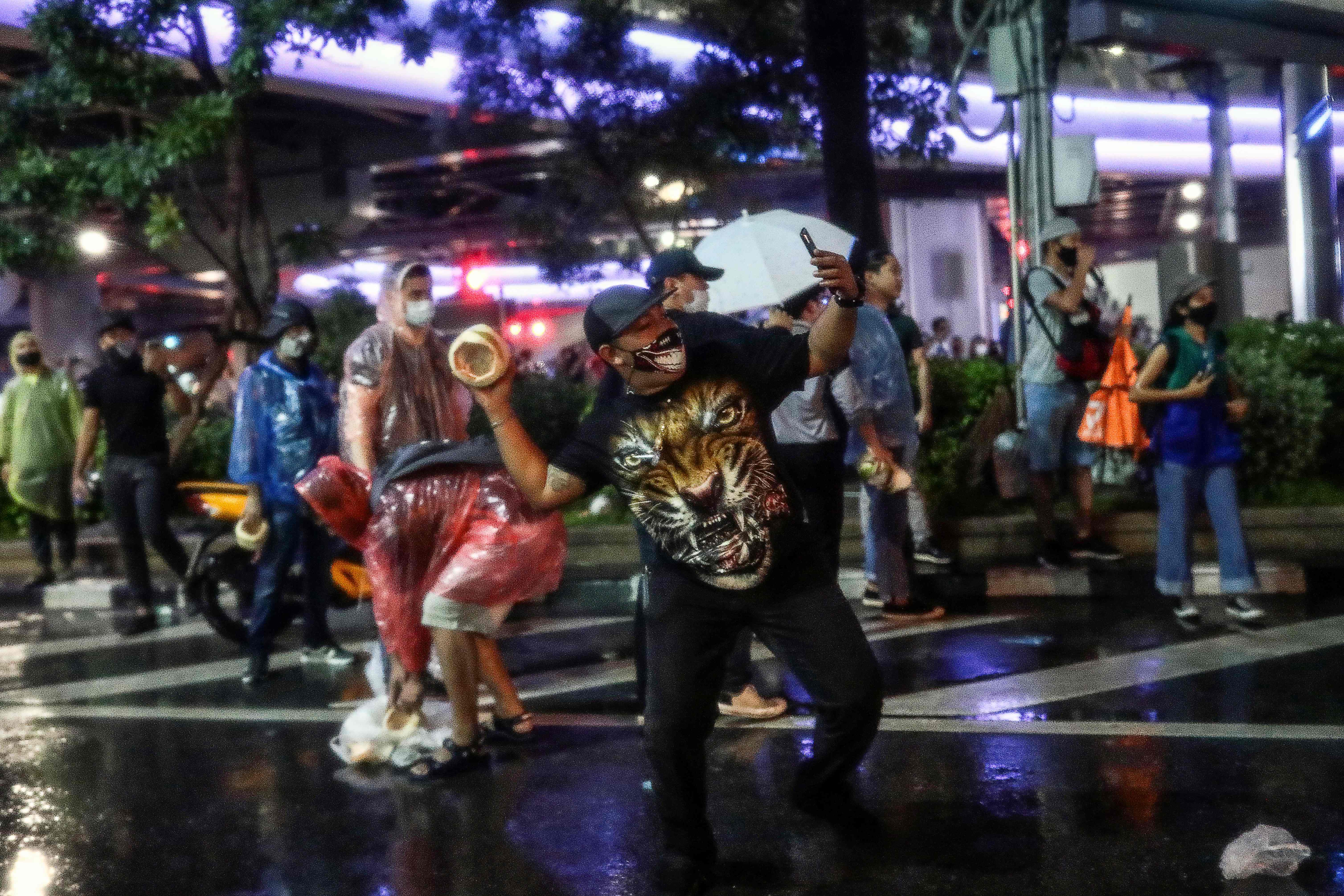 He warned people not to violate them, saying: "Just wait and see … If you do wrong, we will use the law."

Calls have also built up among protesters for reforms to the monarchy, which is accused of helping to entrench decades of military influence in politics.

The only specific incident cited by the government for the imposition of emergency measures was one in which Queen Suthida's motorcade was jeered by protesters.

Police said earlier today that two men would be charged with attempted violence against the queen, which carries a possible death sentence if her life is deemed to have been threatened.

The UN High Commissioner for Human Rights was concerned about the situation in Thailand, said Ravina Shamdsani Said, a spokeswoman for commissioner Michelle Bachelet.

"We are particularly concerned about the application of serious charges, including the crime of sedition, against individuals for peacefully exercising their fundamental rights," she told a briefing in Geneva.