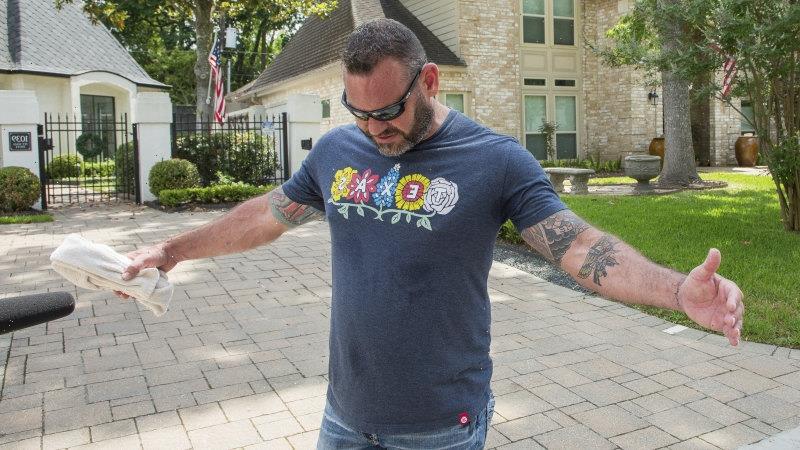 Houston: A tiger that frightened residents after it was last seen wandering around a Houston suburb has been found and appears to be unharmed, police have announced.

In a short video tweeted by Houston police, Commander Ron Borza can be seen sitting next to the tiger, petting the animal and saying it has been a long week searching for it.

“But we got him and he’s healthy,” Borza said as the wife of the man police allege is the animal’s owner sat next to him and fed the tiger with a baby bottle. The tiger was being held at BARC, the city of Houston’s animal shelter, but was expected to be taken Sunday morning to the Cleveland Amory Black Beauty Ranch, an animal sanctuary in Murchison, Texas, located south-east of Dallas.

Authorities had been searching for the tiger, a 9-month-old male named India, since it was spotted Sunday in a west Houston neighbourhood. At the time, it was nearly shot by an off-duty deputy before being whisked away in a car by Victor Hugo Cuevas, who police allege is the owner.

At a news conference later Saturday evening, Borza said that Cuevas’ wife, Giorgiana, turned over the tiger to police on Saturday after a friend of hers reached out to officials at BARC.

“It is Victor’s tiger. That’s what I was told by [Giorgiana Cuevas] … She says they’ve had that animal for nine months,” Borza said. He alleged that the tiger was passed around to different people but that Cuevas’ wife knew where the tiger was at all times this week as authorities searched for it. 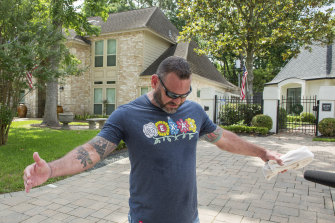 Waller County Sheriff’s Office Deputy Wes Manion approximates the size of the tiger that was seen loose the night before. Manion, who was off-duty at the time, arrived shortly after seeing posts by neighbours. Credit:AP

Police are still trying to determine where exactly the tiger was held this week and if any charges related to having the tiger will be filed. Tigers are not allowed within Houston city limits under a city ordinance unless the handler, such as a zoo, is licensed to have exotic animals.

But Cuevas’ attorney, Michael W. Elliott, on Saturday night continued to insist his client doesn’t own the tiger, saying, “I am not sure it makes any difference who technically owns India as he does not have a birth certificate or title.”

“Victor was not the primary owner of India nor did India stay with him the majority of the time,” Elliott told The Associated Press. “Victor was however involved in the caretaking of India often. Victor loves India as anyone else would love a favourite pet … He treated India with love and fantastic treatment in all respects.”

Cuevas was arrested on Monday by Houston police and charged with evading arrest for allegedly fleeing his home with the tiger after officers had responded to a call about a dangerous animal.

At the time of his arrest by Houston police, Cuevas was already out on bond for a murder charge in a 2017 fatal shooting in neighbouring Fort Bend County. Cuevas has maintained the shooting was self-defense, Elliott said.

During Friday’s court hearing, Waller County Sheriff’s Office Deputy Wes Manion, who lives in the Houston neighbourhood where the tiger was seen, testified he interacted with the animal for about 10 minutes to make sure it didn’t go after someone else. He said Cuevas came out of his house yelling, “Don’t kill it,” grabbed the tiger by the collar and kissed its head before leading it back inside his home. Various videos of the tiger’s encounter with Manion were posted on social media.

Elliott has said Cuevas did nothing illegal because Texas has no statewide law forbidding private ownership of tigers and other exotic animals.

Borza said that an exotic animal like a tiger should never be kept in a home. While India seemed domesticated, the tiger already weighs 79 kilograms, it can “do a lot of damage” and will only get bigger, he said.

“He will be going to a sanctuary … where hopefully he’ll live the rest of his life in a very safe environment,” Borza said.