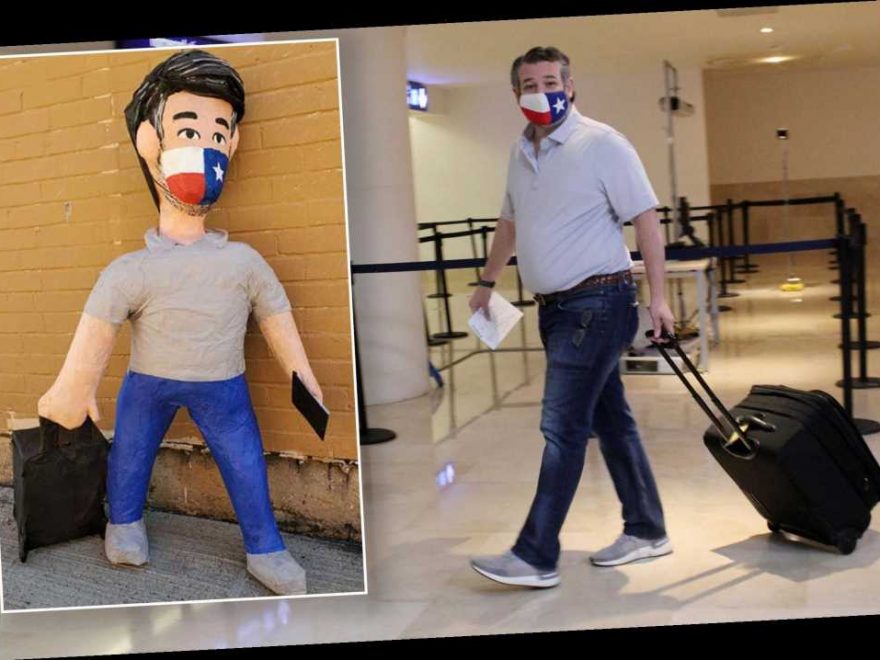 Heidi and seek: Ted Cruz’s wife wants to know who leaked those texts

Sen. Ted Cruz will have an even tougher time beating his critics away with a stick.

A Dallas store is selling piñatas in his image in the wake of his ill-conceived jaunt to Cancun, Mexico.

“We just see it as something trending in the news, and want to provide a good laugh for people during these difficult times,” Carlos De La Fuente, one of the owners of ABC Party HQ, told Newsweek on Tuesday.

The 3.5-foot-tall piñata, which sells for $100, depicts the embattled pol wearing the gray polo shirt, jeans, gray sneakers and Texas flag mask he wore on his return trip from Cancun last week.

He’s holding a US passport in one hand and pulling a rolling suitcase with the other.

“ABC is always trying to stay on top of what is trending on social media or the news,” De La Fuente said, adding that the store has already seen a lot of preorders for the piñata.

The Texas GOPer has been doing damage control after he was caught flying to the Mexican resort city with his wife and two daughters, ages 10 and 12, days after Texas was crippled by a once-in-a-lifetime winter storm.

He was forced to cut his trip short, flying back home the very next day, and issue an apology.

Cruz came under intense scrutiny over the optics of the mini-vacation — and for leaving the family pooch, Snowflake, home alone with no power or heat.

“Apparently, I fed Snowflake to the wolves,” Cruz said, brushing off the backlash. “He was home with a dog sitter. The heat was kind of back on. The whole thing is a bit absurd.”

He also has said that his wife, Heidi, was “pissed” that texts showing her inviting neighborhood pals on the family’s trip had been leaked to the media.