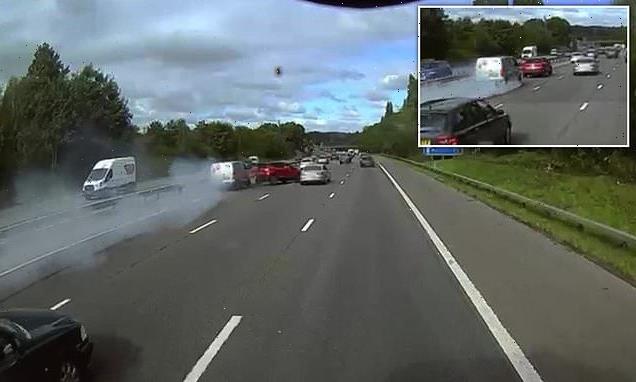 This is the shocking moment a van driver ploughed into the back of a car after failing to spotting that the traffic ahead was slowing down.

The three-vehicle collision happened on the M56 heading east from Runcorn, Cheshire on September 24.

HGV driver Ricky Lemaux captured the drama unfolding on his dashcam as the busy section of motorway was forced to slow down because of congestion ahead.

The video shows a silver Citroen van – its driver seemingly unaware of the traffic – come speeding into view.

Within seconds smoke starts coming off the van’s tyres as the driver slams his foot on the brakes.

However his actions are too late and the van ploughs into the back of a red and black Renault, causing serious damage.

The force of the impact sends Renault swerving into a silver Volkswagen in the next lane, before all three vehicles eventually come to a halt.

According to police who arrived at the scene there were no reported injuries and no arrests have been made. 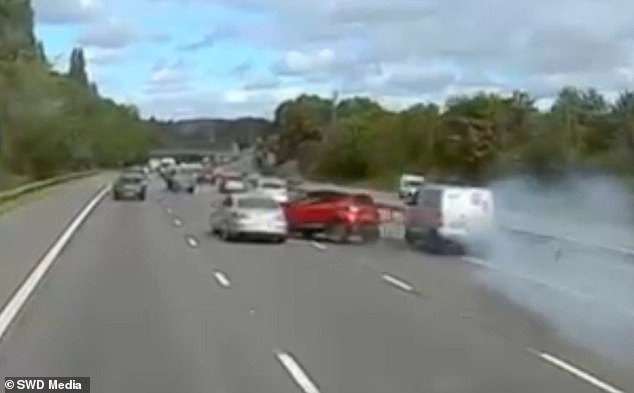 This is the shocking moment a van driver ploughs into the back of a car after failing to spot traffic slowing down up ahead on the M56 near Runcorn, Cheshire

Ricky, 26 and from Kent, posted the clip of the collision online on the evening of the crash.

He wrote: ‘Van driver speeding towards slow-moving traffic on the M56 – then suddenly brakes but fails to stop the van.

‘Crashing into the back of the red car, pushing it into the car next to him.’

The clip has since been viewed over 8,000 times and attracted over 100 comments from people furious at the van driver. 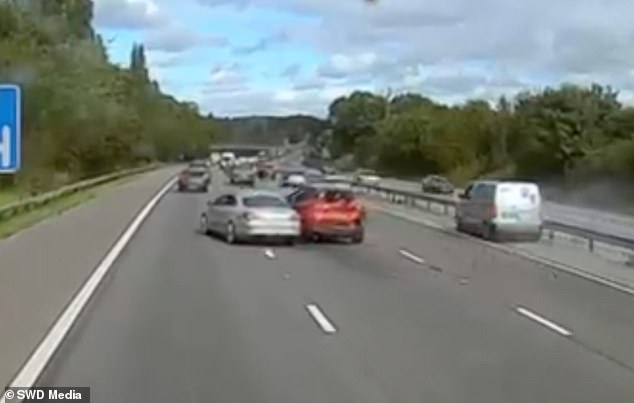 The force of the van’s impact then causes the Renault driver to swerve into a silver Volkswagen in the next lane, with all three vehicles eventually coming to a halt

One user commented: ‘That is why speeding is not OK, and it’s also why you should pay attention on the road.’

Another wrote: ‘Yet another blind driver.’

A third added: ‘He will get more for the fuel than he will for his van at this rate!’

A spokeswoman for Cheshire Police said: ‘At 2.20pm on Friday 24 September police were called to a three-vehicle collision on the M56 between junction 12 to junction 11 on the eastbound carriageway.

‘It involved a red and black Renault, silver Volkswagen Passat and a silver Citroen.

‘There were no reports of any injuries and no arrests have been made.’