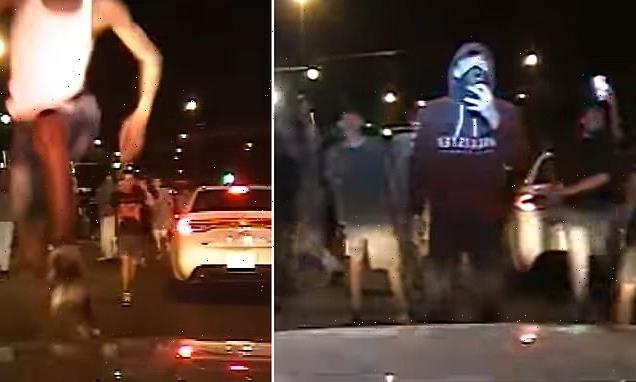 Shocking footage has been released by Illinois State Police of the moment an officer in a patrol car was surrounded by a mob and his vehicle came under attack.

The violence happened in the early hours of July 3 at the intersection of Division Street at Elston Avenue in just north of Chicago’s downtown.

A trooper was driving southbound on I-90 near Division Street at about 2am and noticed that traffic on an exit ramp had completely stopped.

Upon driving over to investigate, a mob of mostly angry young men appeared out of nowhere as they sprinted towards the officer’s vehicle. 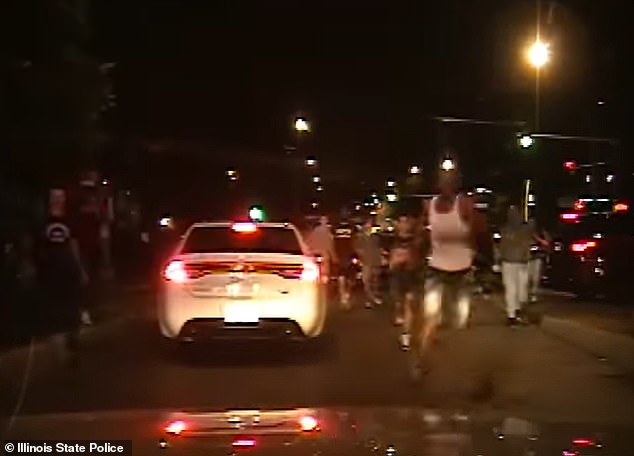 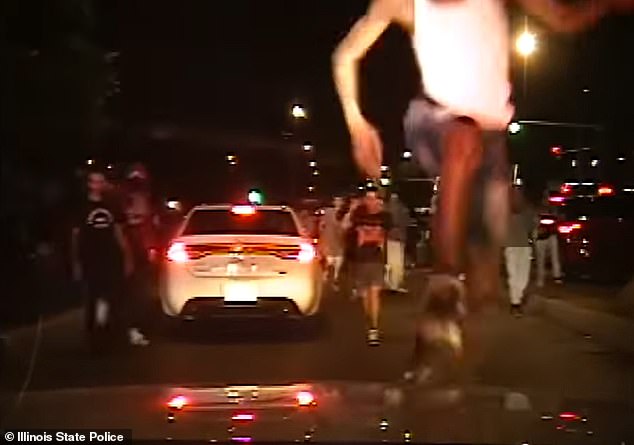 ‘Chicago, we got a mob,’ the officer can be heard relaying over the radio. ‘They just jumped on my car.’

Dashcam video shows many of the vandals had their cellphones out as they filmed the drama for themselves.

The first attacker can be seen running towards the car and jumping onto the hood and then the roof.

Suddenly the windshield of the car was shattered by a brick.

Others quickly swarm the car, including one young man wearing a ‘FET’S LUCK’ T-shirt.

Several attackers jump onto the hood as they stomp and kick the vehicle.

The officer can be heard requesting backup as he proceeds to back up but the menacing mob continues to jump and kick the vehicle while throwing bricks and rocks.

Loud bangs can then be heard together with a series of flashes as fireworks are launched at the car with some landing directly on the vehicle.

The officer estimates the group to consist of around 150 people, many of whom continue to follow the officer as he reverses back down the road. 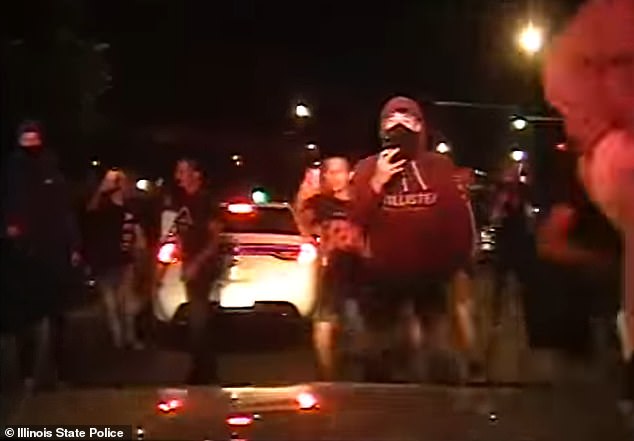 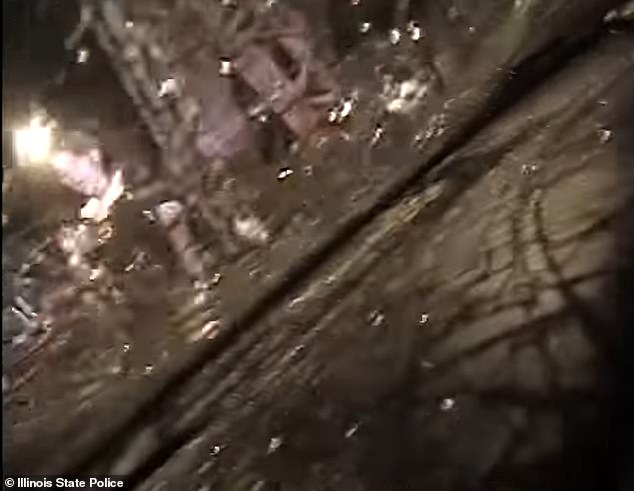 The trooper was eventually able to pull his vehicle back and away from the mob.

Police did not say whether the trooper suffered any injuries in the incident.

‘This type of dangerous behavior puts the general public at risk and will not be tolerated,’ the Illinois State Police said in a statement. ‘ISP is fully investigating the incident, including deploying crime scene evidence technicians.’

The attack on the police cars came just hours before a gunman armed with a high-powered rifle shot dead seven people at a parade to mark July 4th Independence Day, in a wealthy suburb of Chicago suburb.

Robert Crimo, 21, appeared in Lake County court on Wednesday, after being charged with seven counts of first-degree murder. He is expected to face a slew of other charges and is being held without bail.

Lake County State’s Attorney Eric Rinehart told the court that Crimo carried out a ‘calculated and premeditated attack’. He said Crimo confessed to standing on a roof above the parade route and took aim at people standing across the street, reloading his Smith & Wesson AR-15 rifle three times.

State police are now looking for tips on the mob incident, asking people with information to call 847-294-4400. 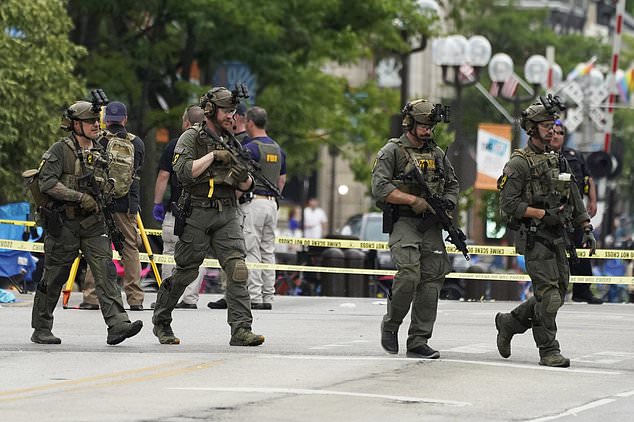 Law enforcement search after a mass shooting at the Highland Park Fourth of July parade in downtown Highland Park, a suburb of Chicago, on Monday, July 4 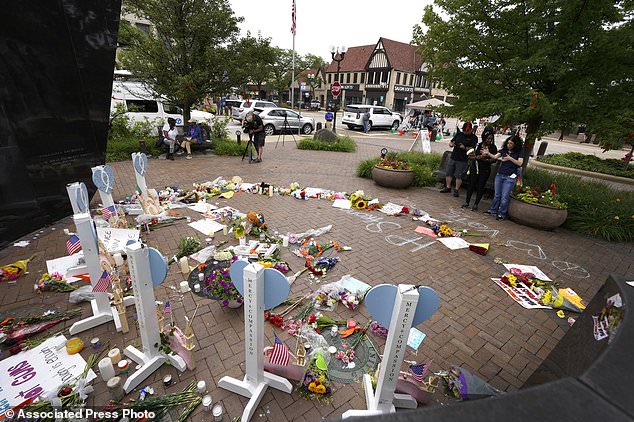 People visit a memorial for those injured and killed in Monday’s Fourth of July mass shooting, in Highland Park, Illinois 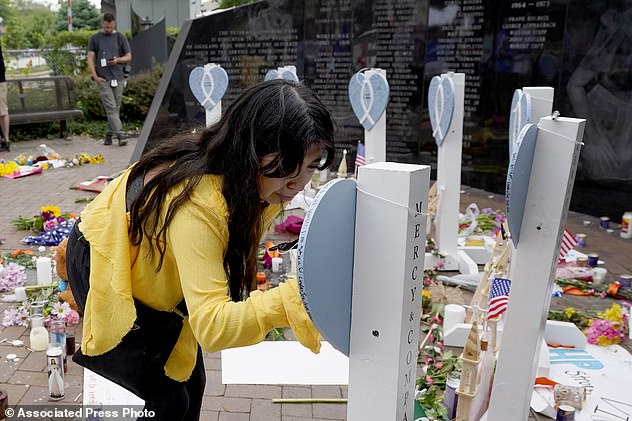 Yesenia Hernandez, granddaughter to Nicolas Toledo, who was killed during Monday’s Highland Park., Ill., Fourth of July parade, writes on a memorial for Toledo along with the six others who lost their lives in the mass shooting