Sunday, on American Idol Season 20’s final auditions episode, everything was going smoothly… until 27-year-old country singer Schyler Dixon attempted to audition with Maren Morris’s “My Church” and kept getting rudely interrupted by a stagehand. The PA had been annoying judge Katy Perry all day with his antics — noisily banging on the set’s grand piano while wiping down the keys, leaving his phone on during auditions, crunching on loud snacks — and when this stage technician began rattling and crinkling a potato chip bag, pulling focus from Schyler’s performance, Katy, Luke Bryan, and Lionel were fed up. So, Katy finally took matters into her own hands, strutting up to the unprofessional worker and angrily confiscating his chip bag.

And that’s when things got weird.

Tension mounted as the black-clad, face-masked mystery man stomped over to the judging desk and violently snatched back his snack bag, while a shocked Luke shouted “Chill!” and Katy cussed out the culprit. A concerned Lionel then called for security. But before security guards could intervene, Katy again took the initiative, ripping off the stagehand’s hat like a “I would have gotten away with it if it weren’t for you meddling kids!” reveal at the end of a Scooby Doo episode.

And that’s when Luke found out that the troublemaker was his wife, Caroline, all along.

Caroline and Luke have a long history, dating back to their college dating years, of pranking each other (the “12 Days of Prankmas” is the Bryans’ annual holiday tradition, for instance), with many of Luke’s pranks again his wife going viral on social media. In 2020, one prank Luke played on Caroline while she was riding her bicycle — startling her with his car horn, causing her to fall — was even declared too “mean” by some concerned fans. “After all the stuff he’s done to me, he deserves it,” Caroline said with a sly grin, as she plotted her latest retaliatory prank this week.

Luke definitely fell for Caroline’s ruse, thanks to goofball Katy, who was actually in on the prank all along. It even turned out that Schyler was an actress, not a real auditioner. “You’ve been punk’d!” cackled Lionel, who wasn’t in on the joke and was just as fooled by Caroline and Katy’s elaborate act. 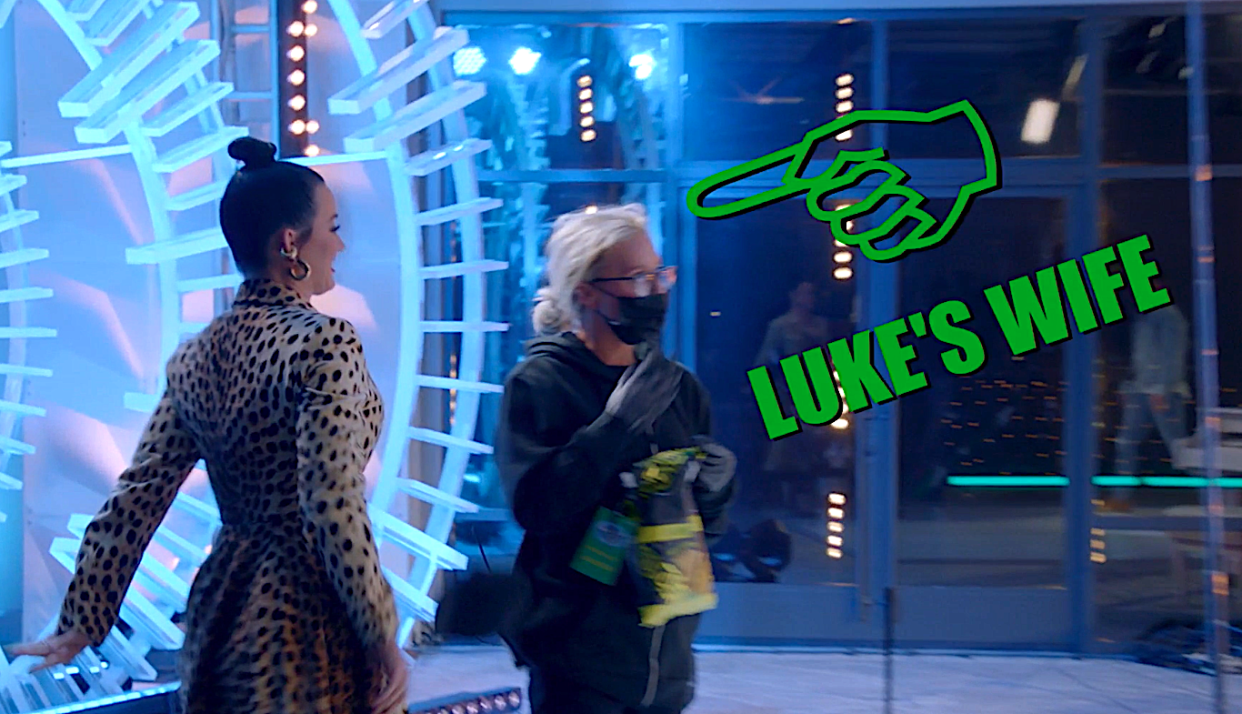 Idol’s final audition episode ended with the three judges reenacting the iconic ballroom routine from DirtyDancing, because they’re clearly having the time of their lives this season. “We have gone completely crazy,” Lionel laughed. But the judges still managed to take their jobs seriously. These were the successful, real auditions of the week:

This church music director, middle school chorus teacher, and self-described all-around entertainment had a cool vibe and butter-smooth voice, giving an old-school piano lounge performance that had Lionel grinning. But I could see his old-fashioned shtick getting, well, a little old. Later Tobias showed off his dancing skills, at Katy’s request, to “Uptown Funk,” so maybe he’ll be more versatile than I thought. (He didn’t know the words to the Ronson/Mars hit, however, which didn’t bode well.) Luke said, “I’m kind of wondering why he isn’t already star,” and Katy told Tobias, “You have the stardust swirling all around you,” but Luke admitted that Tobias’s performance was “vocally not 100% there.” And both Katy and Lionel noted how nervous Tobias seemed. But in the end, the “enthusiasm of his showmanship” earned him a golden ticket.

This badass farmgirl had some real smolder, smoke, soul, and stank. She’s clearly a natural, and she reminded me a bit of last season’s Casey Bishop. “That was amazing. I don’t really have many critiques for you,” raved Katy, who along with Luke predicted that Morgan would at least make the top 20.

Cute couple alert! And you know what that means! Any time two love birds audition together, they get torn apart by the cruel Idol powers-that-be. In this case, while their harmonies were nice on their catchy original song, it was clear who the “better half” was. Kaylin possessed a piercing, powerful voice that Luke said “cut through massively… a big voice that’s authentically yours and has all the right country things going on.” He even said Kaylin might give platinum ticket recipient Huntergirl, whom Luke had previously declared the best female country singer of Season 20, some stiff competition. Meanwhile, the gruff Matt was just told he “complemented” Kaylin well. Only Kaylin got through, with the judges advising Matt to put his energy into original songwriting and emotionally supporting his girlfriend. Let’s hope he steps up and does both.

This poor girl had such a uniquely sad backstory. When she was 10, her father, who was her “everything,” posted a video of her singing that went viral, and she developed a following and started her pop career. But then her dad divorced her mom to run off with a woman he met online through Saylor’s fan page, leaving Saylor feeling incredibly guilty. She hasn’t spoken to her dad in a year, and she told the judges, “I just want to prove that I can do it without him. I don’t need his approval anymore.” Her voice broke more than once during her Kodaline cover as she neared tears, but the judges urged her to power through. “I felt that for you. … When we see you crack, we feel that and we see ourselves in you. … It sounds like you have a story to tell,” said Katy. Luke called the performance “very powerful” and described Saylor as a “beautiful butterfly in a cocoon” ready to spread her wings.

The endearingly awkward Cameron, who’d never sung in front of people before, certainly didn’t have the most powerful voice of Season 20, but it had character — an indie-rock voice, an Americana/folk voice. Lionel told Cameron he needed more time to “get organized” and said no, but Katy said there was “something there.” Even Luke told Cameron, “I’m not sure you know what you’re doing yet,” but then admitted, “I just like you!” — and put him through. I admit it: I like Cameron too. But I also worry that he’s not ready for prime time.

Emyrson’s Brandi Carlile cover was not shown in full, which I suspect is because her reedy, nasal tone could become grating quickly. She has some bad habits, like singing through her teeth (Luke said she sang “a little toothy”). But Katy heard “some really cool things” in Emyrson’s voice (“You can project!”), so she and her fellow judges decided to “roll the dice” on Emyrson. I’m on the fence on her myself.

Blayke has been hustling and grinding for a while, even become homeless while pursuing a music career in Atlanta. Now based in L.A., he’s been making some inroads as a professional songwriter, and I admit that his second Idol audition, of his original song “Get Along,” was better than his Ed Sheeran cover. Katy, who’d requested to hear an original, thought so too. It’s a shame that this guy couldn’t just try out for Songland. Luke said Blayke “didn’t check all the boxes of singing” and criticized his strained falsetto. But Luke was outvoted by Katy and Lionel, who saw potential. If it doesn’t work out for Idol, maybe Blayke and Matt Gorman can just write some songs together.

Accompanied by her veteran-musician dad on piano, Carly proved talent runs in her family with this lovely, heartfelt Elton John cover. “I really feel you’re a star,” gushed Luke. But she too had some bad habit to overcome: Lionel told her she seemed to be overthinking and advised her to be more in moment and “just perform.” Hopefully she can do that in Hollywood without her father’s moral support.

Jay gave up a grad school drama fellowship just to audition for Idol, which obviously could have been a big mistake. I thought there was an overwrought, affected, obviously actor-ly quality and a lack of dynamics/levels to his over-the-top performance, but he definitely had presence and charisma. And the judges absolutely ate it up. “We’ve been waiting on a kid like you, because you’re going to be able to electrify a crowd,” said Luke. “Finally, a competition!” exclaimed Katy. “You owned it. … Your talent is off the chain. It’s so natural, you can’t study no more; there’s nothing to study,” gushed Lionel. So, apparently quitting school was the right decision for Jay — for now. We’ll see how he does in Hollywood, but he received the final platinum ticket of the season, which will allow him to skip the first phase of Hollywood Week, so he’s going to be around for a while.

A professional ballet dancer living in Dresden, Germany, Skyler was raised in an “artsy-fartsy” family (his dad was literally a mime!), but he only started singing recently. And he only decided to try out for Idol after impressed Incubus frontman Brandon Boyd saw one of his Instagram videos and DM’d him to suggest he do so. Skyler’s warm and inviting voice was as graceful, elegant, and nuanced as his dance moves – it was like he was doing vocal pirouettes. “You’re holding these notes and making them tangible moments,” Luke marveled. “You have brought us an element we have never experienced,” raved Lionel.

And so, the Season 20 auditions came to a beautiful close. Come back next Monday, when Hollywood Week commences and the Idol dance continues.