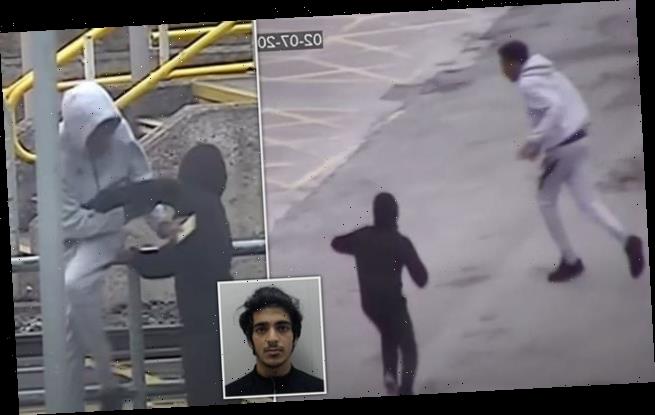 CCTV cameras have revealed the moment two hooded teenagers started having a knife fight in broad daylight at a tram stop.

Shujaat Ali, then 19, hid a blade up his sleeve before ambushing another boy, then aged 17, as he was sat on railings with two friends at Abraham Moss Tram stop in Manchester.

Footage shows Ali in a black tracksuit running up to the 17-year-old boy and hitting him before chasing him into the carpark.

But the younger boy fought back, pelted Ali with rocks and grabbed Ali’s knife from him before stabbing him with it four times as they ran around each other in the car park. 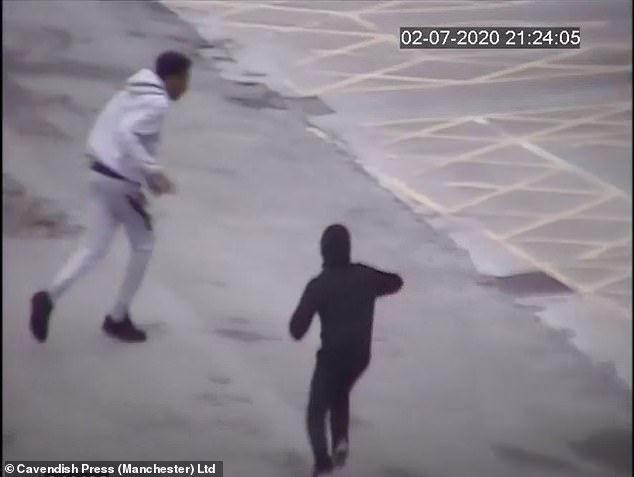 Shujaat Ali, then 19, hid a blade up his sleeve before ambushing another boy, then aged 17, as he was sat on railings with two friends

Ali, from Bury, Greater Manchester, was later taken to hospital with a wound to his left knee and thigh. He had a two to three-inch cut to the left side of his head and a puncture wound to the right side of his leg just above his knee.

The cause of the fight is unknown but police found a haul of powerful ‘skunk’ cannabis at Ali’s home ready to be peddled on the streets.

At Manchester Crown Court, a judge issued a warning about knife crime as she locked up Ali, now 20, for 22 months. 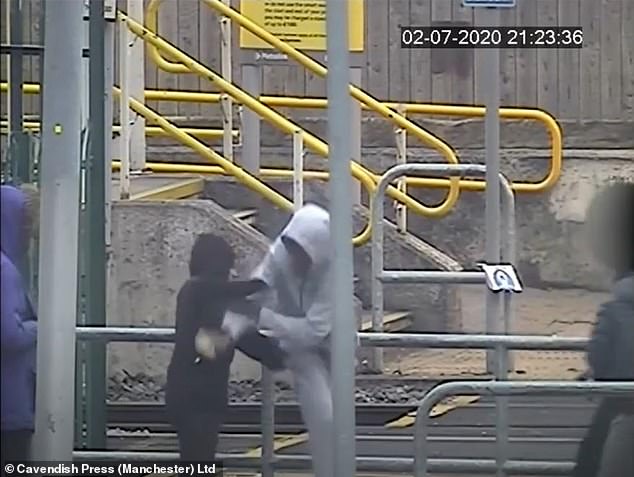 CCTV showed Ali trying to stab the 17-year old but the younger boy fought back, pelted Ali with rocks then grabbed the knife from him before stabbing him four times as they ran around each other in the car park of Abraham Moss Tram stop in Manchester 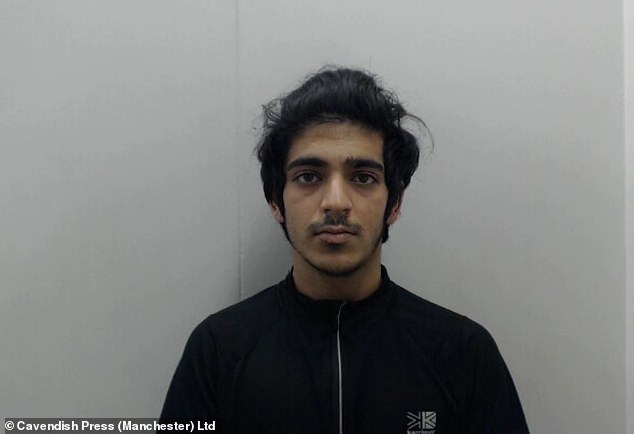 The other boy, now 18, was given a youth rehabilitation order for 18 months. Despite being an adult, the judge ruled he was too young to be named as he was 17 at the time of the offence.

Sentencing Judge Elizabeth Nicholls said: ‘There is a real concern all over the country and within the city about people carrying knives, particularly young people, and once a knife is on the street it can be used to lethal effect by anyone.

‘All those who move in the same circles as you are left with anxiety and fear as they know how many people carry knives and how quickly things can turn into a battle as we saw on that day. Carrying a knife and using it to threaten a person demands an immediate custodial sentence.’ 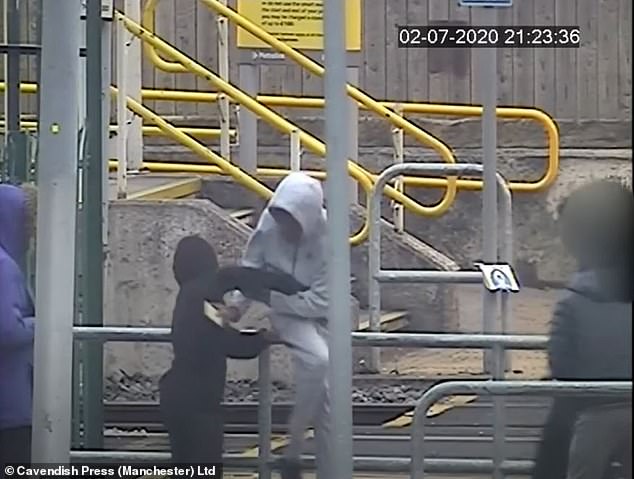 Ali, from Bury, Greater Manchester, was later taken to hospital with a wound to his left knee and thigh

When Ali’s address was searched officers found 298grams of skunk cannabis worth £1,535, cut into 1gram deals.

Ali had previous convictions for nine offences including battery and assaulting an emergency worker. The younger boy had previously been convicted of robbery and witness intimidation and was given a referral order just a month before the stabbing.

In mitigation Ali’s lawyer Katherine Pierrepoint said: ‘He is extremely remorseful for what happened on that day and appreciates that he was the first to approach the other youth with a knife which should not have happened. 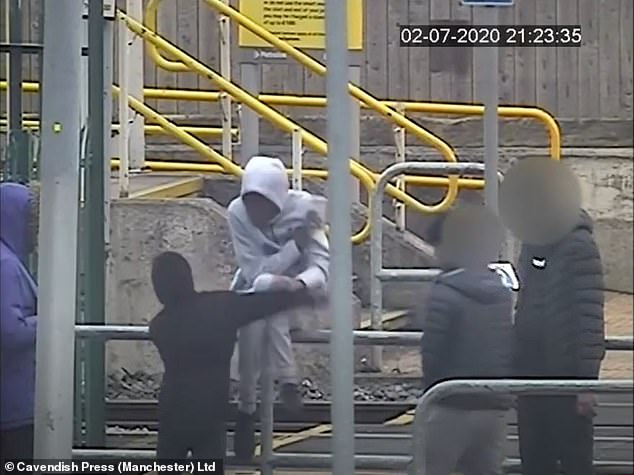 ‘But no actual injury was caused. It is clear this is a young man who is intelligent and articulate. There is hope he can turn his life around in future and make something positive out of it. He feels he has let his mother and family down.’

In mitigation for the younger boy defence lawyer Ian Metcalfe said: ‘Whatever Ali’s actions, my client should not have committed a criminal offence. This was a young man who was no doubt full of adrenaline and in some fear.’ 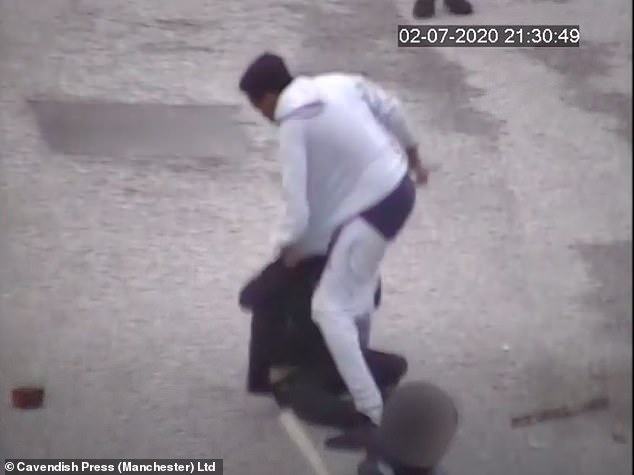 After the case Det Con Leon Cawley-Bowyer, from GMP’s City of Manchester division, said: ‘This was an altercation between two people, which quickly became violent due to the presence of a knife, and could have resulted in a much graver outcome.

‘Knife crime is a top priority for GMP, and I hope that this sentencing today sends a clear message that police remain dedicated to tackling the issue of knife crime on our streets, will ensure that those who engage in this type of criminal activity face the consequences.’

‘Carrying a knife is a serious offence, and I would like take this opportunity to remind the public that there are a number of amnesty bins located across Greater Manchester, where any weapons can be disposed of safely and anonymously.’