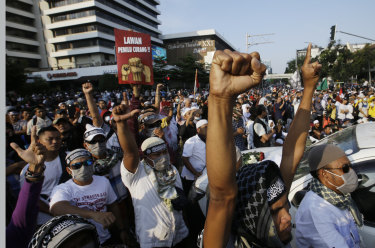 The General Election Commission (KPU) confirmed unofficial counts by private pollsters in the April 17 election, which gave Joko a 55.5 per cent share of votes against 44.5 per cent for his opponent Prabowo Subianto.

Joko won more than 85 million votes of a total of 154 million cast in the world's third-largest democracy, but Prabowo told reporters he believed there had been widespread cheating and about 1000 supporters gathered in Jakarta.

The rally ended peacefully but later Indonesian police fired tear gas as some protesters hurled fireworks and other objects at officers in riot gear in a main street in the capital, TV footage showed.

Prabowo, a retired general, pledged he would "continue to make legal efforts in line with the constitution to defend the mandate of the people". 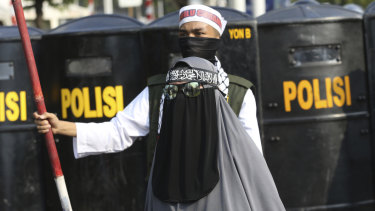 Supporters of Indonesian presidential candidate Prabowo Subianto, during a rally outside the Elections Supervisory Agency (Bawaslu) building in Jakarta, Indonesia.Credit:AP

Sufmi Dasco Ahmad, the legal director of Prabowo's campaign team, confirmed it planned to contest the result in the Constitutional Court.

On Monday, an election supervisory agency dismissed claims of systematic cheating, citing a lack of evidence. Independent observers have said the poll was free and fair.

Flanked by riot police, Prabowo's supporters had earlier gathered mainly at the election supervisory agency (Bawaslu) in the heart of the city's commercial and government district.

There was also a small rally at the KPU in support of the election commission.

Chief Security Minister Wiranto told a briefing there had been plans for "massive demonstrations to storm the KPU, Bawaslu, parliament and the state palace".

He threatened severe punishment for criminal activity and vowed to maintain security, while denying authorities were being draconian.

Former Kopassus commander and Prabowo's supporter, Major General (ret) Soenarko has been arrested on changes of treason and weapon smuggling, according to Wiranto.

Video footage circulated a few days ago showing Soenarko talking to a group of people about the siege the election commission office and presidential palace.

In a press conference, Wiranto said Soenarko was also involved in weapons smuggling "for a certain purpose" for "which we don't know".

"But it was against the law," said Wiranto.

"That's why the police are now investigating."

The KPU announced official results more than a day earlier than expected after working into the early hours of Tuesday, a move that meant the announcement came before planned protests.

A relaxed looking Joko pledged on Tuesday to be a leader for all Indonesians.

"We are grateful and proud that amid our differences, we have been mature in keeping the peace," he said on a visit to a poor neighbourhood of the capital.

Ben Bland, director of the Southeast Asia Project at Lowy Institute, said the election showed how identity and religious politics appeared to be increasingly "embedded in the political discourse in Indonesia".

"The challenge for Jokowi is to try and find a way to defuse tensions," said Bland, using the president's nickname.

Prabowo had warned the cheating claims could trigger "people power"-style protests, though ahead of the result he had urged supporters in a video to be "peaceful in our struggle".

Authorities have tightened security in the capital in a bid to choke off any civil unrest and detained dozens of militant Islamists suspected of planning attacks. Police said they had held or interrogated at least three leading opposition figures for suspected treason.

Police have rolled out extra barbed wire and readied armoured trucks and water cannon around the KPU. Some schools in Jakarta have also shut this week and offices allowed staff to work from home.

The losing candidate can lodge a challenge in the constitutional court within three days, otherwise the election panel will officially declare the winner. Prabowo's challenge to his 2014 defeat by Joko was rejected.