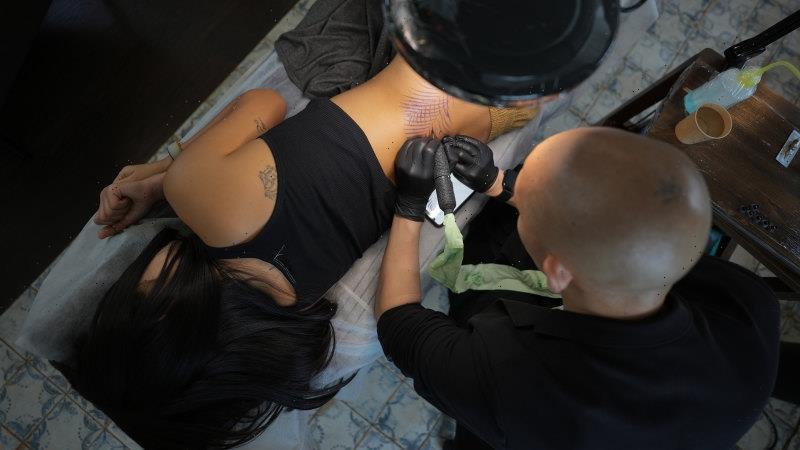 Seoul: In a serene, plant-filled studio panelled with large windows, Kim Do-yoon gives tattoos to clients who visit him in South Korea from around the world for his fine line work. A diaphanous octopus with its tentacles unfurled, a delicate wildflower sweeping over a forearm, a portrait of a beloved pet to last forever.

Kim, known as Doy, is a favourite of celebrities, including actor Brad Pitt and actress Han Ye-seul, but he works discreetly. 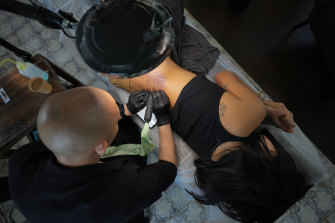 Kim Do-yoon, a tattoo artist who founded a 650-member tattoo labor union that advocates for the rights of artists, at his studio in Seoul. Credit:Chang W. Lee/The New York Times

There is no sign advertising his studio, nestled in a nondescript building in north-central Seoul, near a palace that dates back to the 14th century. He screens customers carefully, rolls the blinds down during appointments and moves his shop about every two years.

In South Korea, his art is a crime. Under a ruling that has been in place since 1992, tattooing without a medical license can result in fines of up to $58,000 even imprisonment. Opponents of decorative tattoos have invoked concerns about long-standing associations with organised crime, as well as fears about inadequate hygiene and potential harm inflicted by tattoo artists, who they say lack adequate skills.

Attempts to overturn this ban have repeatedly failed. In March, the Constitutional Court in Seoul reaffirmed the tattoo industry’s illegality in a 5-4 ruling. South Korean tattoo artists and customers believe that the ruling is at odds with reality, citing drastically changed social norms that have fostered a thriving underground industry, greater openness and acceptance of tattoos, and rising international demand for what are known as “k-tattoos”. 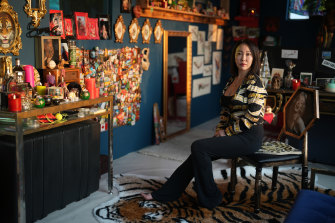 San Lee, a tattoo artist, in her office at her studio in Seoul, where the business has thrived underground.Credit:Chang W. Lee/The New York Times

While tattoos have grown in acceptance in most parts of the world – exceptions include several Islamic countries – South Korea remains one of the few where the artists are treated as criminals. Tens of thousands of them work in secret here, under constant threat of exposure to law enforcement. Of working covertly under the ban, Kim, 41, said: “It’s been so long, it’s almost funny.”

“No one’s trying to go to medical school to become a tattoo artist,” she said.

Tattoo artists say that the industry in Korea has exploded over the past decade.

In Seoul, it is hidden in plain sight. Tattoo artists tend to rent upper-floor office spaces across the city, especially in Hongdae, an arts-centric neighbourhood. It’s easy to find artists, as long as you know where to search: Instagram. 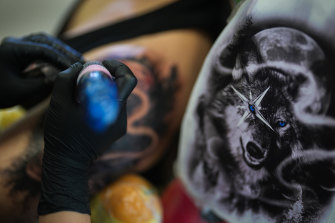 Artwork that San Lee tattooed onto one of her clients.Credit:Chang W. Lee/The New York Times

“There’s just so many amazing artists in Korea, and social media allows you to pick through them and they’re easy to access,” Lim said.

Social media has also spread trends, like the k-tattoo, a term describing the detailed, illustration-inspired tattoos that have become synonymous with Korean artists. The k-tattoo has created a new surge of consumers, Kim said.

Top stars in South Korea, including Jungkook of the K-pop boy band BTS, rapper Jay Park and singer HyunA, have made tattoos more visible by displaying them when possible, helping to cultivate a youth culture more enamoured of them. 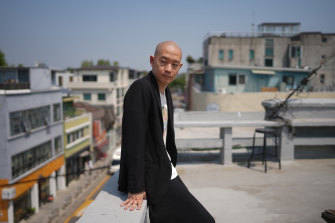 Park’s first tattoo, which he got a decade ago, was an homage to his break dancing crew. He has since lost count of the number of tattoos he has gotten, he said.

“It was a shock to a lot of people at first,” Park, 35, said. “But as time went on and my career started to progress, I started to win people over despite my tattoos, and they started thinking it was cool.”

But he said there were some brands that likely viewed his tattoos as a liability, and that he, along with other stars, had to cover them when appearing on Korean TV.

Last June, a Gallup poll surveying more than 1000 South Korean adults found that more than half favoured legalisation. The results reflected a clear generation gap: 81 per cent of respondents in their 20s were in support, compared with 60 per cent for those in their 40s.

In South Korea, tattoos, also called munshin, have long had negative associations. During the Koryo dynasty, which ruled from AD918 to 1392, people were forcibly given tattoos on their faces or arms listing the crimes they had committed or marking them as slaves. This punishment, the step before the death penalty, left tattooed people as outcasts living on the fringes of society. It was eliminated in 1740.

In the 20th century, tattoos were adopted by gangs inspired by Japanese customs, renewing body ink as a physical emblem of criminality.

Several modern tattoo artists in South Korea said they had deliberately moved away from menacing images like dragons and Japanese imagery often requested by gangsters.

Sanlee, who declined to give her last name, works in Seoul near Apgujeong Rodeo, an area known for trendy stores. She said that she intended to show that tattoos weren’t just relegated to certain types of people, but that they were fashionable.

“When I started, people wanted tattoos to look braver,” he said. “Now, they want beautiful things.”

A long campaign for legalisation

Kim is the founder of a 650-member tattoo labor union that advocates rights of artists. Legalisation would create safer, more sanitary environments for both customers and artists, he said.

Tattoo artists often meet clients alone and trust strangers to keep their secret. Female artists are particularly vulnerable to sexual violence. In the past, the police have conducted sweeps rounding up artists, Sanlee said. Rival shops have been known to flag artists to the police.

“Since what we’re doing is illegal, we’re in the blind spot,” she said. “Because of that, there are many people that are exploiting the situation.”

The number of tattoo artists has multiplied over the past decade, fuelling competition for clients. Apro Lee, based in a city an hour north of Seoul, said he had travelled the world for most of his career because his bold work inspired by Korean folk art was more in demand abroad.

Others, like Lee Dong-kyu, 37, have left Korea altogether. He goes by “Q” and is now based in Los Angeles.

“We are not wrong – tattooing is not wrong but it is illegal and that feels awful,” he said. “I love my job, I am proud of myself, but I cannot open up. Here, I feel free. Feels so much better for work, but at the same time it’s not my country.”

Sanghyuk Ko, or Mr. K, one of the most sought-after tattoo artists in the United States who is known for his ultra-detailed work, said bluntly that he would have never made it as far if he hadn’t left Seoul.

Ryu Ho-jeong, a member of the National Assembly in South Korea who helped introduce a bill last summer to legalise tattooing, said that the Constitutional Court’s narrow ruling to uphold the ban signalled change for an “art industry that the world loves.”

Tattooing is a boon for the South Korean economy, Ryu said by email. She said she would keep pushing for legalisation until the tide of public opinion shifted further.

Customers are waiting, too.

Kim Ae-min, a 38-year-old teacher in Dongducheon, has tattoos that he says are intended to honour his values. One arm is covered with various masterpieces by Shakespeare. He’s in the process of getting a back tattoo of Venus, inspired by his wife. He seldom exposes his tattoos, aware that others might not view his ink as art.

“I can’t wait for the moment where people feel safe or free to show their tattoos and express their feelings through tattoos,” he said. “I am hopeful.”

This article originally appeared in The New York Times.