Sydneysiders have flocked to the city's popular beaches amid NSW's first taste of spring, with temperatures climbing into the high 20s in some parts of the state.

Sydney was treated to 25-degree weather on Sunday afternoon, with Coogee and Bondi beaches inundated with visitors making the most of the city's hottest day since May 9. 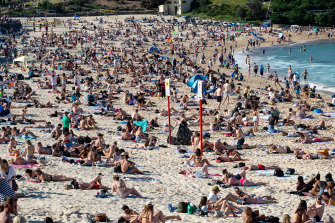 Coogee beach was packed on Sunday as temperatures pushed up to 25 degrees. Credit:Edwina Pickles

The warmer weather had NSW Health on edge ahead of the weekend, with the eastern suburbs still an area of concern for community transmission of COVID-19.

In Sydney on Sunday, the highest temperature for the day was recorded at Badgerys Creek which warmed to 28.6 degrees by 2.30pm.

The highest temperature across the state was at Smithville in the north-west, reaching 28.9 degrees at 2pm.

Bureau of Meteorology duty forecaster Alex Majchrowski said the heat on Sunday "was the result of a high-pressure system that was sitting out over the state."

"Temperatures will drop over the next couple of days before the warm weather returns and we are in that pattern now," he said.

Monday and Tuesday are expected to cool to 20 and 18 degrees before another high-pressure system hits midweek, with Thursday predicted to soar to 28.

Mr Majchrowski said the average temperature for September in Sydney was 20 degrees, with Thursday's weather an outlier to otherwise normal weather for this time of year. Out to the north-west of the state, temperatures are forecast to tip into the 30s.

"Things are really warming up for them," he said. "After Thursday, we are forecasting for temperatures to cool off again as another cold front makes its way through so things will get a little bit colder and a little bit wetter and windier later next week."

The warmer weather had NSW Health on edge ahead of the weekend, with the eastern suburbs still an area of concern for community transmission of COVID-19. Credit:Edwina Pickles

Waverley mayor Paula Masselos said ahead of Sunday's heat she was "absolutely" concerned about large crowds flocking to Sydney's most famous beaches.

"We need to remember that we are still in a pandemic and we need to adapt our behaviour," she said. "If you are considering making the trip out to Bondi, and the beaches look busy, please come back another time."

During the early stages of the pandemic, Sydney's east became the epicentre of the virus, with Waverley and Woollahra local government areas accounting for nearly 15 per cent of confirmed cases in the state by the end of March.