Sudan has lifted the death penalty and flogging as punishment for gay sex after almost four decades of hardline Islamist rule.

Despite ‘offenders’ still facing life imprisonment for their ‘crime,’ with sentences starting at five years, many in conservative Sudan were outraged by the reforms and took to the streets in protest.

The transitional government announced a raft of reforms over the weekend, including scrapping punishments for apostasy, allowing consumption of alcohol, banning female genital mutilation (FGM) and lifting restrictions on female dress.

The new government has pledged to lead the country to democracy after last year’s toppling of Islamist autocrat Omar al-Bashir, who had reigned since 1989. 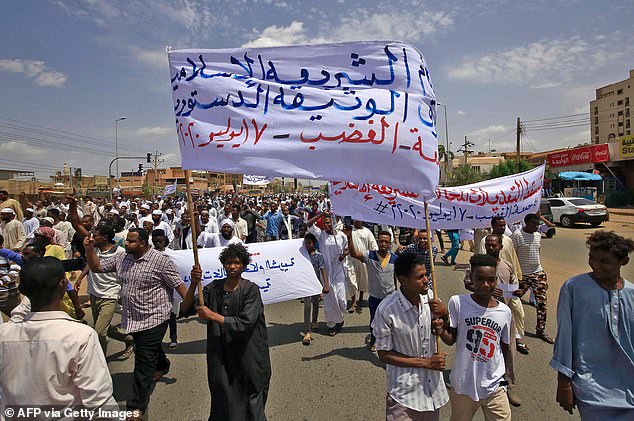 Protesters march with banners in support of maintaining Islamic Sharia as a part of the draft constitution during a demonstration along al-Siteen Street (Sixty) in the Khartoum East district of Sudan’s capital on July 17, 2020

‘These amendments are still not enough but they’re a great first step for the transitional government that’s trying to implement changes,’ Noor Sultan, founder of Bedayaa, an LGBT+ group in Egypt and Sudan, said on Thursday.

‘We see this as a positive change on the path to reform.’

Same-sex relations are criminalised in most of Africa and the Middle East. Sudan was one of six countries, including Iran, Saudi Arabia, Yemen, Nigeria and Somalia, that imposed the death penalty for gay sex, according to the LGBT+ rights group ILGA.

Under Sudan’s old sodomy law, gay men faced 100 lashes for the first offence, five years in jail for the second and the death penalty the third time around. The punishments have been reduced to prison terms, ranging from five years to life.

The legal amendment was part of several reforms announced by the justice minister on Saturday, including plans to decriminalise apostasy – the abandonment of a religion – and to permit non-Muslims to consume alcohol.

Sudan will also ban female genital mutilation, which typically involves the partial or total removal of the external genitalia of girls and women, and allow women to travel with their children without a permit from a male relative, he said.

Sultan said the government was discreet about dropping the death penalty for gay sex and its amendment document did not detail what Article 148 – the sodomy law – was about. 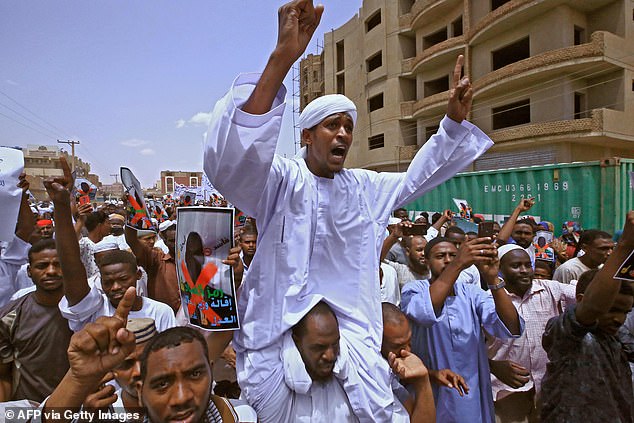 Protesters chant slogans in support of maintaining Islamic Sharia as a part of the draft constitution as they march during a demonstration along al-Siteen Street (Sixty) in the Khartoum East district of Sudan’s capital on July 17, 2020

‘I think society is still reluctant to accept such changes but I hope that the government will continue in its path toward reform,’ she said.

‘Congrats to the immoral people who achieved their misguided demands over female genital mutilation, legitimising sodomy, drinking alcohol, and opening bars and night clubs,’ said one Twitter user with the handle @marwanbsas1980.

Fabo Elbaradei, an LGBT+ activist based in the capital Khartoum, welcomed the surprise move to lift the death penalty but said it would not change life much for gay people in Sudan.

‘We are subjected to social discrimination and we face a prison sentence … for simply being who we are,’ he told the Thomson Reuters Foundation in emailed comments.

‘We are still deprived (of) our right to live like any other members of society.’

Government officials did not respond to requests for comment.