Steven Seagal has appeared on Russian state media to defend his visit to a prison where Ukrainian POWs were burned alive last month.

The former action star, a Russian citizen since 2016, said he went to see ‘evidence’ of what happened – before repeating Kremlin propaganda that Kyiv was to blame.

Seagal, 70 and who also had a brief career in a soul band, went on to describe himself as a ‘diplomat’ and said he is producing an ‘unbiased’ documentary about the Ukraine war despite professing his love and admiration for Vladimir Putin.

Olenivka Prison, in an area of the Donbas occupied by pro-Russian forces, was burned down on July 29 with around 50 Ukrainian prisoners of war though to have died. Many of them were hero veterans of the battle for Mariupol. 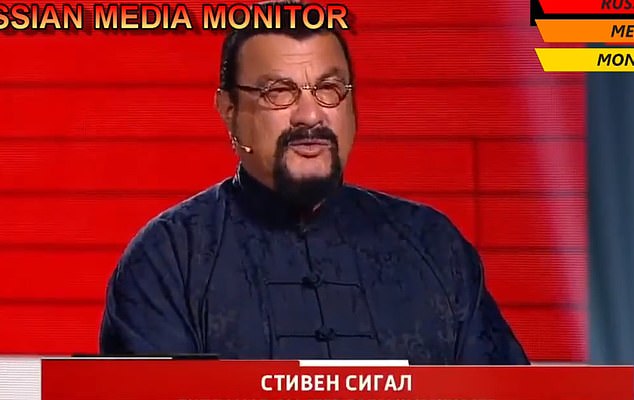 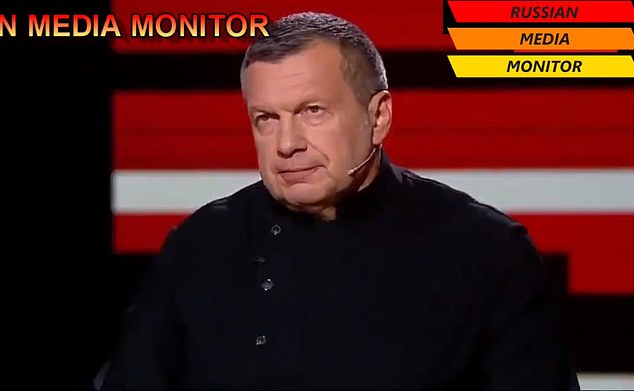 Grilled by Putin propagandist Vladimir Solovyov, Seagal parroted Kremlin propaganda that the attack was carried out by Ukraine – saying he was ‘one billion percent sure’

Russia says Ukraine ordered a strike on the jail and carried it out using US-supplied HIMARS missiles that have been wreaking havoc behind Putin’s frontline.

Kyiv says that is a lie and Moscow burned down the prison, likened by former detainees to a concentration camp, to hide evidence of torture carried out there.

Western observers and experts concur with Ukraine, saying images of the warehouse where the prisoners died shows it largely intact after the fire – something they say would not be the case if it were struck by an explosive HIMARS rocket.

Beds inside the building where Ukrainian prisoners burned to death in their sleep are also undisturbed, and there is no visible blast crater.

HIMARS rocket fragments displayed on Russian state TV as ‘evidence’ of the strike could easily have been collected elsewhere on the battlefield and brought to the building, they added.

Meanwhile other prisoners at the camp, who are in touch with families outside its walls, also did not report hearing an incoming rocket or explosion.

In order to counter that narrative, Russia sent Seagal to carry out his own inspection – with the ‘diplomat’ concluding ‘one billion percent’ that HIMARS was to blame.

He told propagandist Vladimir Solovyov: ‘I know a little bit about these things. I can tell you, one billion percent, it wasn’t a bomb that would blow up from the ground.

‘You could see where a missile came from outside and incinerated everything.’

A martial arts expert and Buddhist who starred in action films throughout the 1990s, Seagal’s career fell apart when he was accused by multiple female co-stars of sexual assault and faced allegations he mistreated stuntmen on set.

After a brief career in a soul band, he began cosying up to Russia around 2014 – the last time Putin invaded Ukraine – calling the attack ‘very reasonable’.

Around the same time he branded Putin ‘one of the greatest world leaders’, and then became a Russian citizen two years later.

In 2017, he was banned from entering Ukraine after he was deemed a ‘threat to national security’ and in 2018 he was made special envoy for Russia to improve ties with the US by Putin himself.

He has continued to parrot Kremlin propaganda throughout the Ukraine war, and now claims to be making a balanced documentary about it.

His visit to Olenivka appears to be part of the film-making process, with images pumped out by Russian state media showing him examining missile fragments and speaking to prisoners there.

Seagal is known to be friendly with several other controversial world leaders, including Belarussian President Alexander Lukashenko 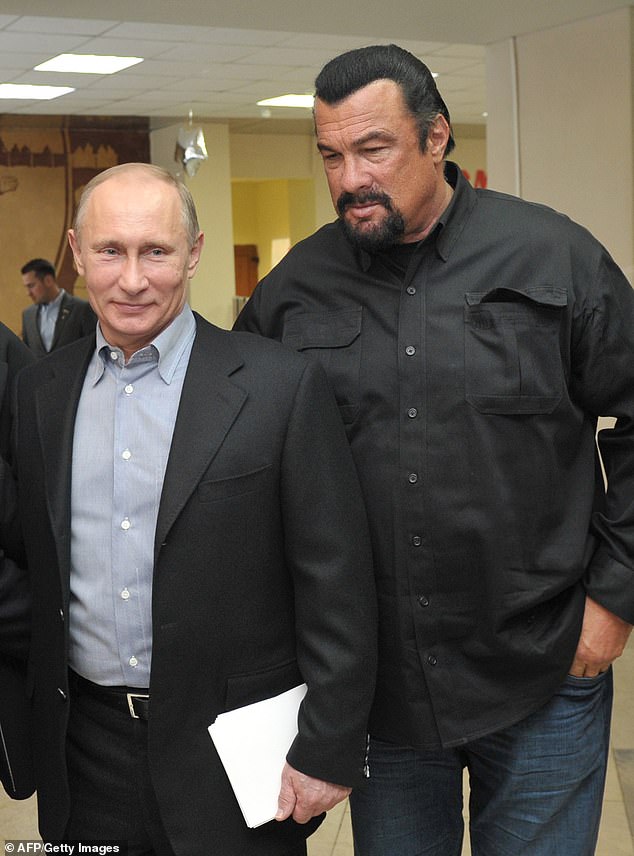 Lukashenko is a close ally of Putin and has repeatedly echoed the Russian president’s sentiments through his invasion of Ukraine, even calling the Russian military’s massacre of civilians in Bucha western propaganda.

Seagal has also mingled with the likes of Venezuela’s Nicolás Maduro and former president of the Philippines, Rodrigo Duterte, with whom he practiced karate.

Both Seagal and Putin are avid martial artists – Seagal is a longtime practitioner of aikido, while Putin has studied judo and sambo.

Putin was suspended as president of the International Judo Federation just weeks ago in response to the invasion of Ukraine.

Seagal was spotted celebrating his 70th birthday in Moscow in April, rubbing elbows with many of Russia’s elite who have been sanctioned by western countries.

Vladimir Soloviev, a controversial Russian TV presenter who openly backs Putin’s invasion of Ukraine, can be seen standing with Seagal.

Seagal tells the crowd in English ‘Each and every one of you, you are my family and my friends. And I love all of you and we stand together, through thick and through thin.’

On April 10, the day Seagal celebrated his birthday with Russia’s elite, the mayor of the Ukrainian city of Mariupol said more than 10,000 civilians had died after enduring weeks of Russian bombing raids and hunger due to the siege.