Do dogs spread coronavirus? Spanish study finds people who own the pets and walk them outside face 78% higher risk of catching Covid-19 and it may be ‘because they’re unhygienic’

Walking a pet dog can raise someone’s risk of catching coronavirus by 78 per cent, a study has claimed.

Spanish researchers looked at how different behaviours change people’s likelihood of catching the virus and found getting supermarket deliveries and dog-walking were significant.

They suggested the dogs could be catching the virus and transmitting it, or transporting it by touching contaminated surfaces in public and then their owners.

How much animals actually spread the virus is still not well understood, although there have been confirmed cases in cats and dogs and the disease ultimately came from bats via another type of mammal. Animals do not appear to get sick, however.

The scientists who did the study said dog owners should be extra careful about hygiene during and after taking their pet outdoors. 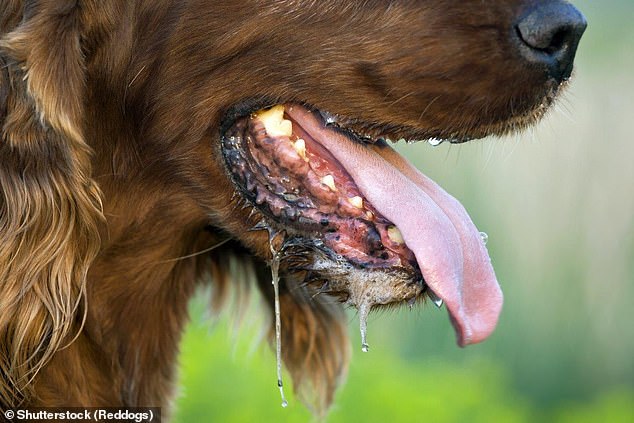 Dogs may contribute to the spread of coronavirus by catching it themselves in the same way as people do, or by touching contaminated surfaces and then transporting the viruses around, scientists say (stock image)

The study was done by the University of Granada and the Andalusian School of Public Health in Spain.

Researchers did a survey of 2,086 people in Spain, some 41 per cent of whom were middle-aged between 40 and 54 years old.

People were asked what they had done during the pandemic and whether they had caught coronavirus, then the scientists compared the result to work out which activities were riskiest.

They found that 4.7 per cent of the group caught Covid-19 at some point – approximately 98 people.

Activities that significantly increased someone’s risk of testing positive included accepting supermarket deliveries at home, which raised the risk by 94 per cent and was found to be more dangerous than actually going to the shop.

Working at work, instead of from home, caused the risk to rise by 76 per cent, the research found.

Having someone else in the household test positive for Covid-19 caused someone’s own risk to shoot up by 60 times.

And living with a dog which they took for walks outside raised someone’s risk by 78 per cent, they said.

‘The results of our research warn of increased contagion among dog-owners,’ said Professor Cristina Sánchez González.

‘The reason for this higher prevalence has yet to be elucidated. Taking into account the current scarcity of resources to carry out the diagnosis of SARS-CoV-2 in humans, the possibility of diagnosis in dogs is extremely unlikely.’

Professor Sánchez González said there was not enough information available to be able to tell whether dogs spread the virus like people or simply acted as a surface that people could pick the virus up from.

It may even possible that the virus was spread in their faeces, she added.

The study said it didn’t make sense that children’s playgrounds should be shut out of fear of the virus spreading, when dog parks could remain open, given that they appeared to be driving the coronavirus transmission.

The study did not find that other aspects of people’s lives, such as who they lived with, their jobs or other pets, had any effect on the extra risk brought by the dog.

Professor Sánchez González added: ‘In the midst of a pandemic and in the absence of an effective treatment or vaccine, preventive hygiene measures are the only salvation, and these measures should also be applied to dogs, which, according to our study, appear to directly or indirectly increase the risk of contracting the virus.’

The study was published in the journal Environmental Research.

CAN YOU CATCH COVID-19 FROM YOUR PET?

The chance of your dog catching Covid-19 strain is very slim, according to the World Health Organization (WHO).

Professor James Wood, head of veterinary medicine at the University of Cambridge, said: ‘Despite millions of people having had Covid-19, the numbers of pets found to be ill or infected is still tiny.

‘Put simply, our pet dogs and cats can catch Covid-19 from us, when they are living with us, but only do on very rare occasions.’

Scientists say pets don’t appear to get very sick with Covid-19, and various pet organisations and charities say there is no need to be worried.

The first dog in the world to catch coronavirus died after it was declared disease-free and returned home to its owner in Hong Kong.

The owner of the 17-year-old Pomeranian, whose also had Covid-19, did not allow the dog to be autopsied, so the exact cause of death remains unknown.

How do animals get infected?

Animals are likely to catch the virus the same way a human would — when respiratory droplets enter the pets’ nose or mouth.

Professor Wood said: ‘Cats may become infected by the high doses of virus transmitted by their infected owners in some settings.

‘The relative size of a cat versus a human means that there is far less exhaled breath from one cat in a house, compared to the exhaled breath volumes from a human patient.

‘Further, the grooming behaviour of cats means that they are more likely to catch infection from an owner than vice versa.’

When pets have been reported to have the virus, they have signs that indicate a respiratory illness.

Downing Street said the first cat infected in England had symptoms of a respiratory infection with a nasal discharge and some shortness of breath.

Scientists have shown that cats, ferrets and hamsters are susceptible to SARS-CoV-2. But ducks, chickens and pigs don’t appear to be.

Professor William Weir, of the University of Glasgow’s School of Veterinary Medicine, said ‘the significance of SARS-CoV-2 as a feline or canine pathogen is unknown’.

He added that there have been no reports of cats passing the virus to dogs or vice versa.

Can humans catch Covid-19 from animals?

There is no evidence that a human could catch the coronavirus from an animal in the same way as it would from another human.

Covid-19 is mainly spread through droplets produced when an infected person coughs, sneezes, or speaks.

Professor James Wood, head of department of veterinary medicine, University of Cambridge, added that pets would exhale far less breath — which may have virus droplets inside — than humans.

In any case where a pet has tested positive for the virus, the owner reportedly had it first.

The WHO says: ‘While there has been one instance of a dog being infected in Hong Kong, to date, there is no evidence that a dog, cat or any pet can transmit Covid-19.’

Professor Weir said: ‘At present, there is no evidence that cats, dogs or other domestic animals play any role in the epidemiology of human infections with SARS-CoV-2.’

An official report by the UK’s top vet said household pets may carry the virus on their fur, which risks spreading the disease from person to person.

It said: ‘Close contact such as cuddling, grooming, feeding and allowing animals to share food could all allow the transfer of virus.’

The document, prepared by the UK’s Chief Veterinary Officer, was considered on April 30 at a meeting of the Government’s Scientific Advisory Group for Emergencies (SAGE).

The report warned that the virus could survive on pet fur, meaning ‘there is a plausible pathway that the animal may act as a fomite [infectious object] for at least a few hours and transfer virus to others in the household.’

It added that pet owners who have symptoms to prevent their dog or cat from coming into contact with ‘susceptible humans’.

What precautions should I take when dealing with animals?

If you are sick with Covid-19, it is recommended you restrict contact with your dog and see if other people can look after them.

The Centre for Disease Control and Prevention says: ‘It is still recommended that people sick with Covid-19 limit contact with animals until more information is known about the virus. This can help ensure both you and your animals stay healthy.’

How to you stay safe around your pet: