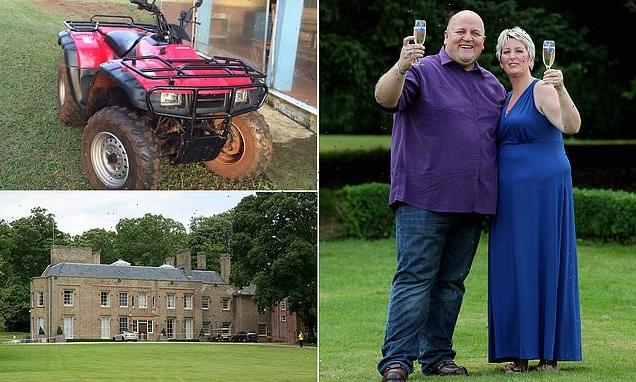 Son, 13, of £148m Euromillions jackpot winners Adrian and Gillian Bayford ‘fights for his life after his quad is hit by car driven by his sister, 15, in grounds of family mansion’

The son of a Euromillions jackpot-winning couple is fighting for his life after being involved in a collision on his quad bike.

Adrian and ex-wife Gillian Bayford’s 13-year-old son is believed to have been hit by a car driven by his sister, 15.

The incident happened in the grounds of Adrian’s £12million mansion in Cambridgeshire.

According to The Sun, the teenager’s sister raised the alarm after the collision knocked him off the quad and through a fence.

Euromillions winners Adrian and ex-wife Gillian Bayford’s 13-year-old son is believed to have been hit by a car driven by his sister, 15

Emergency crews and an air ambulance were called to the 148-acre estate.

He is now in intensive care in hospital, ‘fighting for his life’.

A source told the publication: ‘It’s touch and go. This is devastating for Adrian and the whole family.

‘Adrian is a lovely bloke who cares dearly about his kids. They were having fun at home and a tragic accident happened.’

It is believed that both the quad bike and the car were bought for the children by Adrian with his share of the £148million jackpot he won with Gillian in 2012. 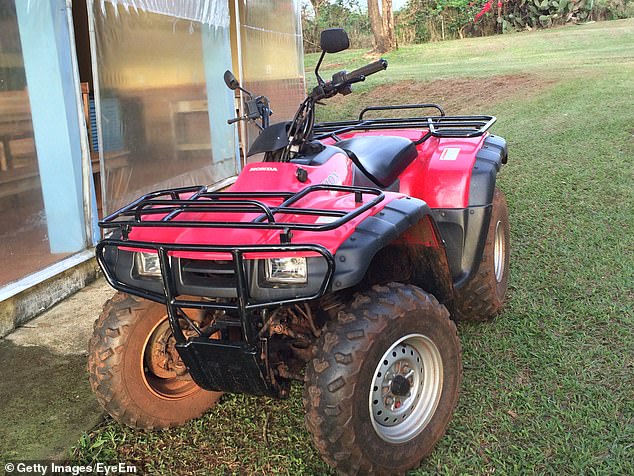 It is believed that both the quad bike (pictured) and the car were bought for the children by Adrian with his share of the £148million jackpot he won with Gillian in 2012.

The former postie divorced wife Gillian in 2013, just months after their big win as their marriage broke down ‘irretrievably’.

Gillian moved to Scotland with their children, with Adrian expected to sell his Cambridgeshire pile after buying another property to be near his children.

But it is believed he has now scrapped plans to sell the mansion and has moved back there.

Sources say Gillian has made the trip down from Scotland to be at her son’s bedside.

A Cambridgeshire Police spokesman said: ‘We were called with reports that a car and a quad bike had collided on private land.

‘The rider of the quad, a teenage boy, was taken to Addenbrooke’s Hospital in Cambridge with serious injuries.’